A section of the A6 is set to close this weekend. 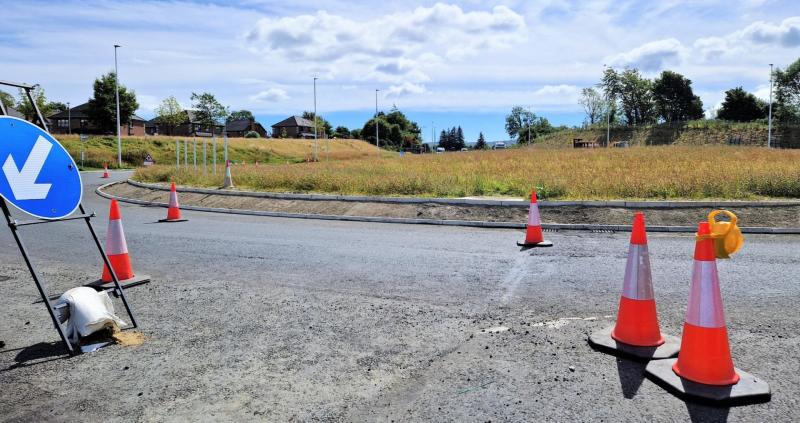 A row is brewing between residents of Dungiven and DFI chiefs ahead of this weekend's planned closure of the A6 at the newly constructed Dungiven roundabout.

Residents say they will 'take action' to stop the works proceeding if the DFI cannot reach a compromise with local residents and business owners.

A group called 'Dungiven A6 Concerned Residents' have created a facebook page to outline their outrage at the ongoing battle with DFI.

“Folks this page has been set up to create awareness of the ongoing battle with DFI regarding the A6 dualling scheme," they said.

“DFI boasted that the A6 bypass to Dungiven was opened on March 22nd. Since then there has been nothing but changes to the road network in around Dungiven town, with access being cut off for local people and especially the elderly from going to Dungiven town.

“Dungiven town is yet again to suffer at the hands of the planning from DFI where the town is being completely closed to traffic from the Maghera side, and traffic from the Derry side unable to continue through Dungiven.

“A 38 mile detour the DFI are asking people to take instead of closing half of the road or working a night shift to complete the works, where this compromise has happened in other areas throughout the north in very recent times.

“The impact this has to the people of Dungiven and the surrounding area includes the Goldliner bus service, the airporter service and local bus journeys that people depend on going through Dungiven being suspended from 8pm on Friday until 6am on Monday.

“This also has a knock on effect to businesses in Dungiven suffering a loss in footfall. Not to forget the passing trade for the weekend's GAA matches in Owenbeg where there is 10,000 people expected to attend.

“DFI have been offered numerous options and if they cannot come back and agree a compromise, we will as a community be taking action to stop these works proceeding.”

Local elected representatives have stated that despite repeated requests DFI officials have so far refused to meet with residents and elected officials face to face.

Councillor Sean McGlinchey said, “Let's be clear here – the people of Dungiven welcome this bypass – they have waited 50 years for it. All we are asking for is that the DFI show the residents and local stakeholders some respect.

“Come and listen to their concerns and needs, and find a compromise. I have spoken to the main contractor SWS several times and they have agreed to meet with us and DFI any time we want, but DFI have refused to meet.”

Councillor McGlinchey has accused the DFI of double standards when it comes to closing the critical A6 route,

“I am asking the DFI why can't they treat Dungiven the same as they treated Coleraine? They did the exact same type of work at the Wattstown Road roundabout in Coleraine a few weeks ago and they did the work through the night to avoid closing the whole area – why can't this be done for the people of Dungiven?

“It is totally unacceptable to close off a town like this without proper consideration being given to the people's needs,” added councillor McGlinchey.

Councillor Kathleen McGurk also added, “Everyone accepts that there will be disruption during a major project like this but there should have been some compromise found for this closure weeks ago.

"The people of this area and the outlying areas have been more than patient through this two year program.

“In regard to this weekend's closure, we have been asking DFI for weeks to look at alternatives but there has been no compromise to date. This is all very late in the day.

“Both myself and Councillor McGlinchey absolutely support the rights of the residents if they decide to protest at the works this weekend, and we will be there with them to show our support if no compromise is reached.

The County Derry Post understands that DFI representatives have been in contact with Derry GAA officials in the hope that road closure hours may be shortened to facilitate match traffic coming to and from Owenbeg.

There has been no confirmation from the main contractor if they can facilitate these reduced operational hours and complete the works on time.

DFI have been contacted for a response.