A local businessman said banking outside the town could take the guts of an hour. 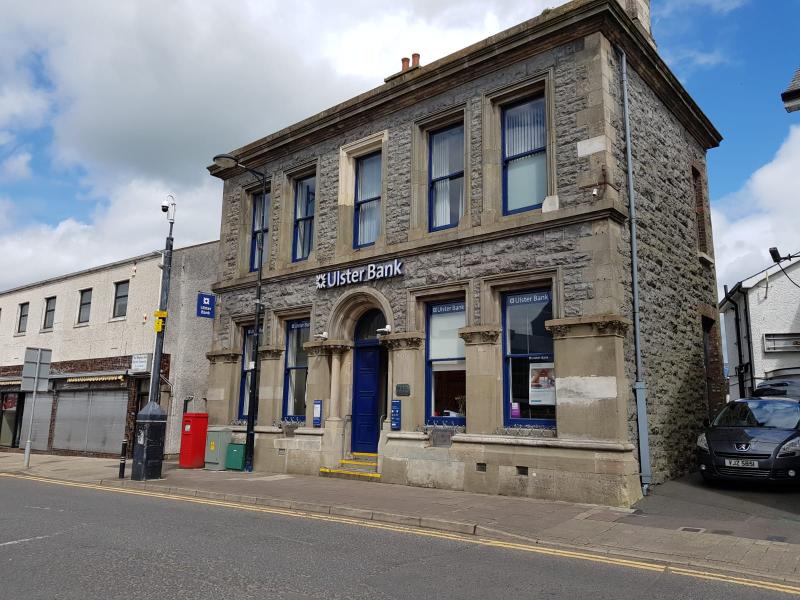 Yet another County Derry town is to be let bereft of a bank following the announcement of its last remaining branch last week.

Ulster Bank announced the closure of its Maghera branch as part of a raft of closures, including branches in Holywood, Warrenpoint, Dunmurry, Antrim, Ballymoney, Larne, Comber and Clogher.

The news was met with disappointment in Maghera, with customers of the bank recalling in-branch encouragement to go online during recent visits.

The development also means many businesses and customers will now have to travel to neighbouring towns like Magherafelt for their banking requirements.

One local businessman told Derry Now that moving accounts presents its own problems for business.

Following the closure of another local branch, they moved their banking arrangements to Ulster Bank, only for it to now suffer the same fate.

“I suppose it's shock really. Even speaking to the staff in the branch yesterday, they had only been informed the day before,” he said.

“We had a branch in Dungiven as well that went, so this was the only branch in any of the towns we are based in.

“It's very inconvenient now; your next closest bank is in Magherafelt. We have the post office but we don't know what the arrangements will be, so it's very much up in the air at the minute.

“By the time you drive to Magherafelt and try to get parked where the bank is – you could spend ten, fifteen minutes trying to get parked.

“You'd be talking the guts of 50 minutes to an hour out of your day to get any sort of banking done.” He said the general migration towards online and telephone banking showed little sign of abating.

“It's hard to get speaking to someone on the phone, and now you can't even get to speak to someone in the branch over the counter,” he said.

“If you have any queries at all, it's going to make it extremely difficult. We find it difficult, never mind someone elderly or who isn't particularly au fait with online banking.

“It's not going to be ideal at all, and I'm sure there are a lot of businesses who are not too amused when they hear the news that it's gone.

“The bank has been here in the town as long as I remember. It's the same story everywhere. There were two banks in Kilrea there a long time; they're both gone now too.”

Mid Ulster District councillor for the area, Martin Kearney, said the closure of the bank would mark the 'end of an era' in Maghera.

“The decision by Ulster Bank to close their Maghera branch is very disappointing as it is also the last remaining bank in the town,” he said.

“Centrally located, and a listed building, it’s been a landmark in the town for a long time.

“As always, the closure will impact on members of the community who can’t or don’t use online facilities, or who might just prefer using a face-to-face banking service.

“Maghera has always been a thriving centre for commercial businesses, as well as being home to many independent family businesses.

“The closure of the last bank in the town is a blow for the bank staff too and there are questions about what Ulster Bank’s plans are for their workers.

“It is doubly disappointing that this comes at a time when Maghera town centre is about to undergo a £2.5million regeneration through a Mid Ulster Council public realm scheme.”

Cllr Kearney also hit out at a lack of 'meaningful action' on the part of the NI Executive to address the continuing closure of rural bank branches.

“Rural communities are losing out again as a result,” he added.

Towns in the county have been hit by several branch closures in recent years, with Danske bank closing its Kilrea branch in December 2020 and Limavady's Bank of Ireland branch closing in late 2021.

The recipient appeared to have left the gift behind when he moved branches.
ADVERTISEMENT - CONTINUE READING BELOW