An SDLP candidate was accused of being 'the IRA'. 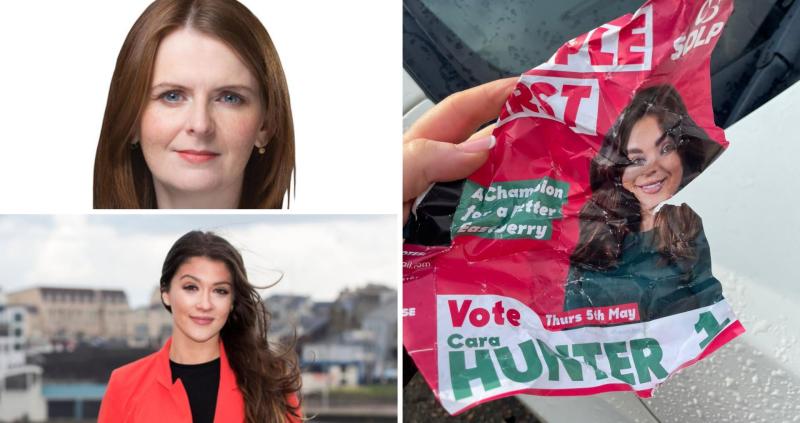 Posters of Caoimhe Archibald were damaged, while Cara Hunter was verbally abused while canvassing.

A candidate standing in the East Derry constituency in the upcoming Assembly election has been on the end of verbal abuse while canvassing and an election poster belonging to a second candidate has been damaged in County Derry.

Cara Hunter took to social media last night after she was on the receiving end of a 'sad, sectarian act' in the Heights area of Coleraine.

Posting a picture of her election leaflet scrumpled up and left on a car bonnet, she described the moment 'three grown men' stood by her car, watched her canvass and destroyed the election literature.

"My team and I were out this evening canvassing, coming to your door to talk about local issues and concerns," she said in a video posted on her Facebook page.

"Unfortunately, we were met with what I would call intimidating and sectarian behaviour. It was a reminder to me of just how unacceptable and sad it is that in 2022, in Northern Ireland, we are still experiencing sectarianism.

"For me, the reason I got into the SDLP was because this was a party founded on a respect for diversity and diverse beliefs and backgrounds.

"In my time as an SDLP MLA, I have aspired to do just that. I have worked with everybody from all backgrounds and beliefs and that's the kind of Northern Ireland I want.

"It's a pivilege to represent the people here and I will continue to do that, regardless of who you are or where you come from.

One local councillor has said there are 'serious questions' to answer.

In a separate incident, Sinn Féin candidate Caoimhe Archibald reported that one of her posters had been stolen in nearby Portrush.

"Last week after derogatory and defamatory comments about me were posted on a public Facebook group, one of my posters was criminally damaged in Portrush," she said.

"Several others have been stolen/damaged across the area. PSNI are investigating so if you have any information get in touch as below.

"If you find one of my posters, please PM me and let me know."

A police spokesperson confirmed they were investigating the incident.

"Police in Coleraine are appealing for any witnesses or dash cam footage in relation to criminal damage to an election poster on Crocknamack Road, Portrush," they said.

"On 5th April 2022 we received a report that damage had been caused to the poster by blue paint being thrown over it.