Over two thirds of respondents in our readers' survey supported the bill. 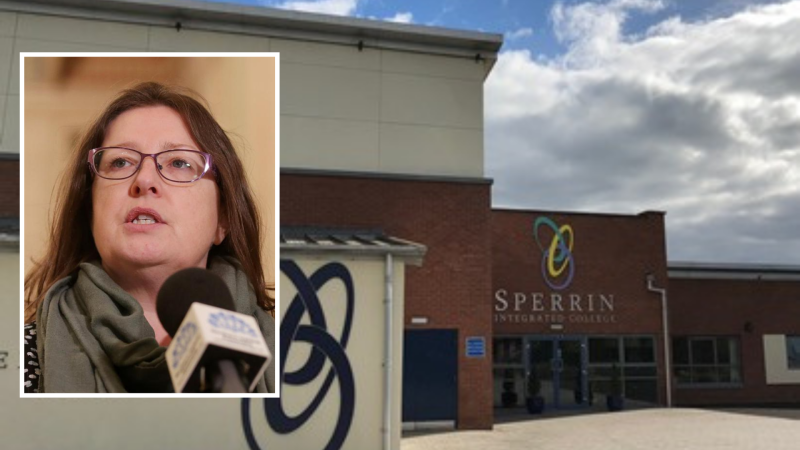 Local parents are broadly in favour of a bill on integrated education which is currently making its way through the NI Assembly's legislative process.

The Integrated Education Bill, moved by Alliance MLA for Strangford, Kellie Armstrong in June 2021, will reach the Further Consideration Stage this week.

If adopted as an act, the bill will lead to the promotion, reform and expansion of integrated education in Northern Ireland.

Currently, just 7% of all pupils in the North are educated in just over 90 integrated schools and colleges, which aim to mix pupils of Protestant, Catholic and other backgrounds.

Seven of these schools are in County Derry.

Education representatives from the four main churches have criticised aspects of the bill, while letters sent home from some schools have claimed it 'aims to elevate integrated schools above every other type'. 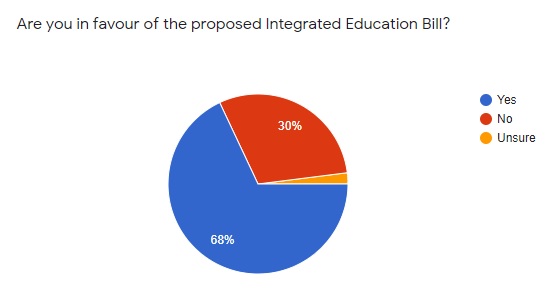 Our readers' survey found 68% of respondents were in favour of the Integrated Education Bill, with 30% against and 2% unsure.

Of the respondents whose children attended a Catholic school, or had attended one themselves, 59% were in favour of the bill, with 38% against and 3% unsure.

60% of respondents with a controlled or state school background were in favour of the bill, with 40% against.

Unsurprisingly, all of those with an integrated schooling background were in support of the Integrated Education Bill becoming law.

On respondent, who was undecided on whether they were in favour of the bill, said the expansion of integrated schools should not be at the expense of other sectors.

“I definitely think there should be more integrated schools, but not at the cost of schools that have another ethos,” they said.

“Parents and pupils should definitely have more choice, but choice should not be taken away from people who choose to send their children to religious schools.”

One respondent said many schools were already integrated in all but name. 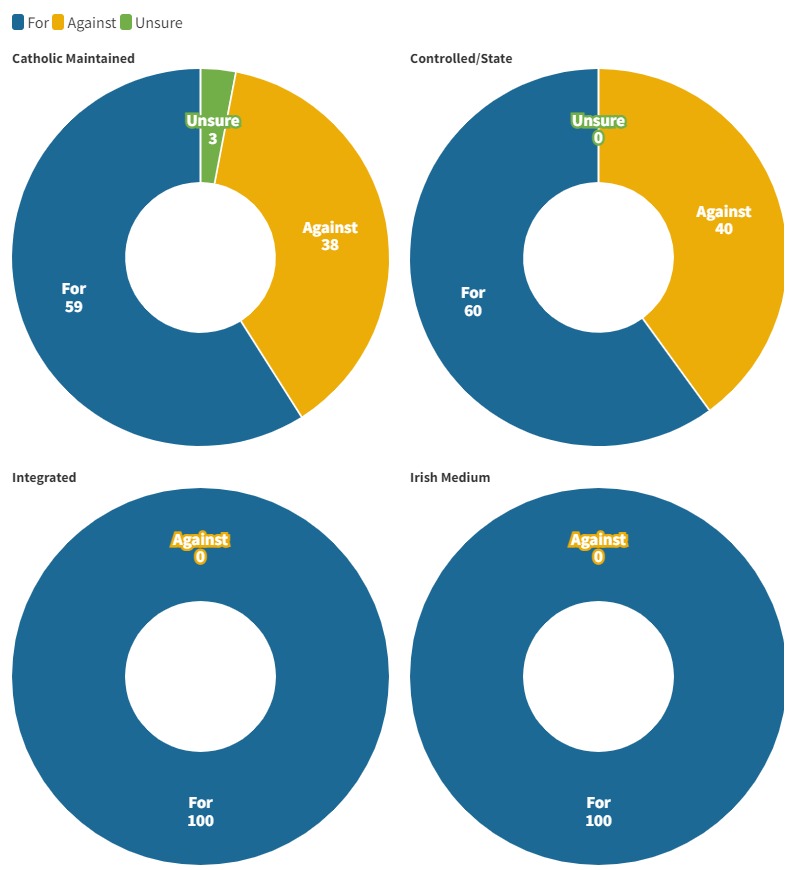 “Many controlled schools including ours has over 20% of pupils who are from other or Catholic backgrounds,” they said.

“Disadvantaging all other sectors in Northern Ireland is simply unfair and ultimately will take away parent choice.

“I understand that some leaders feel integrated schools will be one way of helping the situation in Northern Ireland but surely all schools do what they can through shared education and an inclusive ethos, such as is promoted by controlled schools.

“I would urge leaders to very carefully look at all aspects of this new bill and ensure fairness for all schools.”

Another respondent who was opposed to the bill simply said they were happy for their children 'to have their education integrated into their faith'.

One respondent who was in favour of the bill highlighted the parental choice element as being key to their decision.

“I should be able to place my children in a local school. Currently I would have to drive 40mins plus traffic per day to send kids to integrated school,” they said.

“As well as this diversity in religious and all forms of diversity education is critical for young minds emerging as adults.

“I was impressed when I travelled and met many non-faith people who knew about Sikhism, Muslim etc. I knew nothing and felt stupid. I should have been provided with this knowledge.”

Another respondent said church, state and education should be separate.

“It's the 21st century. Integration should be the norm. If someone wants their child to have a religious education they should send them to Sunday school,” they said.

The cost of running so many different educational sectors was also mentioned by a respondent in favour of the bill.

“It is costing Northern Ireland a fortune to have different schools for different faiths. Could you imagine, if that money were used towards an integrated education system,” they said.

“The facilities, technology, quality of teaching staff available would be outstanding. Our children would excel. Isn’t that what we want for our kids, our future, our city.”

A further respondent drew on their own experience in the integrated sector to highlight its positives.

“Every child and parent should have the option to attend an Integrated school. The future is not and should not be segregated,” they said.

“Our history is filled with segregation and anger, my Integrated Education experience has taught me to acknowledge the past and forge timeless bonds with people who are different than me.

“The bill gives people the option and provides support to schools that need it. I support it,” they added.