The move would also force the resignation of Deputy FM Michelle O'Neill. 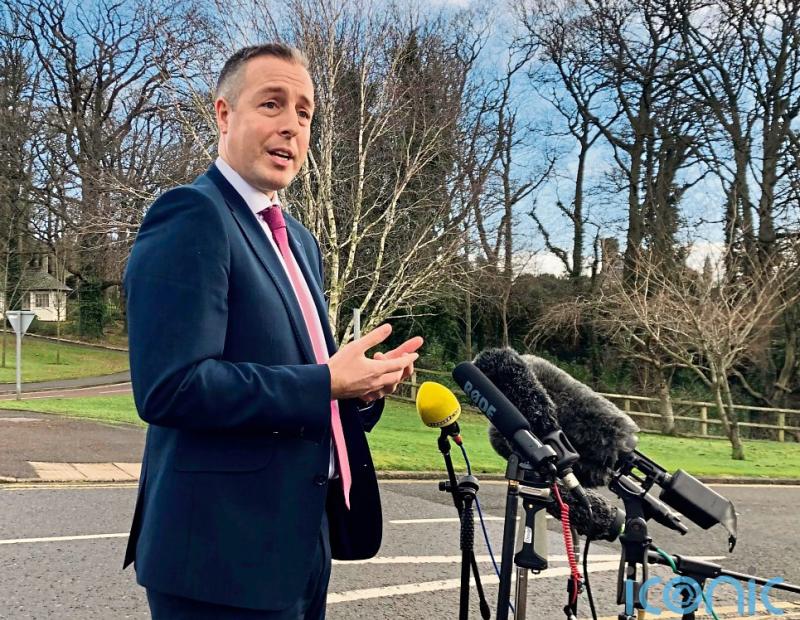 Paul Givan is expected to announce his resignation as Northern Ireland’s First Minister this afternoon. (PA)

Northern Ireland First Minister Paul Givan is expected to announce his resignation by the end of the week, a senior DUP source has said.

It comes amid the party’s protest against the Northern Ireland Protocol and follows his colleague Edwin Poots’s decision to order a halt to agri-food checks at Northern Ireland’s ports.

The European Commission has said the decision by DUP Agriculture Minister Mr Poots to stop the checks creates “further uncertainty and unpredictability”.

The PA news agency understands senior DUP figures are meeting later to confirm the timing of Mr Givan’s resignation statement, which could come as early as Thursday.

In those circumstances, other ministers in the administration could still remain in place. However, the Executive could not make any significant decisions.

That would prevent the coalition from agreeing a three-year budget – a spending plan that is currently out for public consultation.

A planned official state apology by Mr Givan and Ms O’Neill to victims of historic institutional abuse, scheduled for March, may also not happen.

DUP leader Sir Jeffrey Donaldson has repeatedly threatened to bring down the Stormont institutions in protest against the so-called Irish Sea border, introduced as part of the post-Brexit protocol.

However, there has been no confirmation from Stormont officials whether they intend to comply with the order.

DUP rivals at Stormont insist Mr Poots’s direction is unlawful and civil servants are obliged to follow the law at all times.

An EC spokesperson said: “The European Commission has been working tirelessly with the UK Government to address practical challenges related to the implementation of the protocol.

“The decision by the Northern Irish Minister for Agriculture (Edwin Poots) is therefore unhelpful.

“It creates further uncertainty and unpredictability for businesses and citizens in Northern Ireland.

“The European Commission will closely monitor developments in Northern Ireland pursuant to this announcement.

“Vice-president Maros Sefcovic will speak to the UK Foreign Minister Liz Truss on Thursday afternoon to continue our discussions on finding durable solutions for the people of Northern Ireland.

“He will recall that controls on goods arriving in Northern Ireland from Great Britain are a key element of the protocol.

“They are necessary for Northern Irish business and citizens to continue to benefit from access to the single market for goods.

“They are also necessary to avoid a hard border on the island of Ireland.”

Lorries were still being received at a Department of Agriculture, Environment and Rural Affairs (Daera) checking facility in Belfast Port earlier on Thursday morning.

Several vehicles entered the facility after the ferry arrived from Cairnryan in Scotland at 6am.

A staff member declined to confirm to PA whether the agri-food checks required under the protocol were continuing.

The picture is further clouded due to the fact some of the port checks have been delegated to local council staff, while UK Border Force personnel also have a presence at the facilities. It is unclear what would happen to their roles if the Daera staff withdrew.

Mr Poots’s direction only relates to the sanitary and phytosanitary (SPS) checks required by the protocol. The customs procedures on Irish Sea trade are unaffected by his instruction.

Announcing the move on Wednesday, Mr Poots said legal advice he had sought on the issue supported his view that he was entitled to stop the checks.

The UK Government has said it will not intervene in what it has characterised as a matter that falls within the Stormont Executive.

Government critics dispute this contention, highlighting that the UK has a duty under international law to abide by the terms of the Brexit Withdrawal Agreement.

Northern Ireland Secretary Brandon Lewis has denied claims the development is a “stitch-up” between the Government and the DUP.

“No, absolutely not,” he told ITV on Wednesday night. “This is a decision that the minister in Northern Ireland has taken.”

Mr Poots’s order came after he last week failed to secure the wider approval of the Stormont Executive to continue the checks.

The minister argues that in the absence of Executive approval, he no longer has legal cover to continue the documentary checks and physical inspections.

His bid to seek a ministerial vote at the Executive last week was branded an electoral stunt by other parties, and Sinn Fein used its veto to prevent the issue from getting on the agenda.

The other parties insist the Executive has already agreed Mr Poots’s department has responsibility for carrying out the checks and he does not have the authority to halt processes that are required under the Withdrawal Agreement, an international treaty.