Sadie decided to help after hearing the helicopter flying over her home. 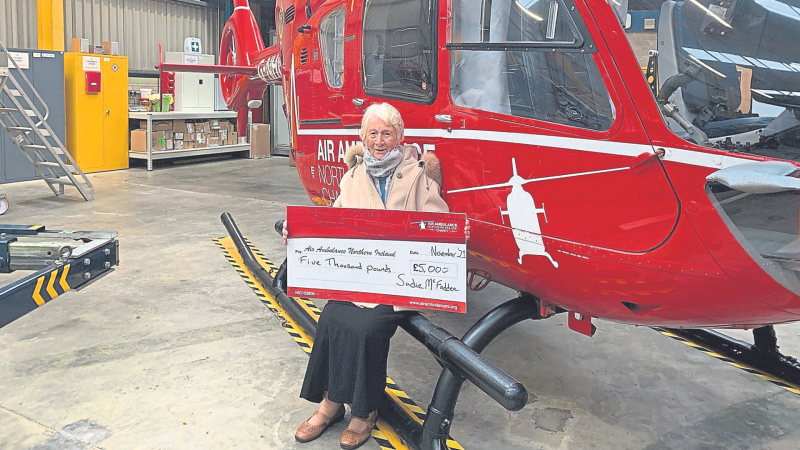 Castledawson woman Sadie McFadden handing over her £5,000 donation to the Air Ambulance.

Sadie McFadden, from Castledawson, celebrated her 90th birthday in September, and after hearing the helicopter flying over her home en route to a patient, decided to do something to help.

Encouraging her friends and family to donate to the charity, rather than buy her presents, Sadie managed to raise £5,000.

The 90-year-old has found the past 20 months a challenge, having been used to being out in her local community, meeting friends and helping others.

She has knitted hundreds of blankets and teddy bears to support orphanages, which brought so much happiness to those that received these lovely gifts.

“It was such a privilege to welcome Sadie to the home of Air Ambulance NI and thank her personally for ensuring the service is there for today for those in need,” she said.

“On average HEMS is tasked to two people each day, providing critical pre-hospital care that can be the difference between life and death.

“We would like to send our sincere thanks to everyone who contributed to this donation, quite literally, we would be grounded without support such as this.”

It can get to anywhere in Northern Ireland in approximately twenty-five minutes. From inception to November 2021 the medical crew have been tasked 2,613 times.

The HEMS team attend patients who are seriously ill or injured, bringing emergency pre-hospital care direct to the casualty with the aim of saving lives, brains and limbs.

The charity cherishes connecting with former patients and patient families.

If you, or one of your family members, have been treated by the HEMS Crew please get in touch with Air Ambulance NI by calling 028 9262 2677.

Air Ambulance NI aspires to raise £2million each year to maintain and sustain this service so public donations are crucial.