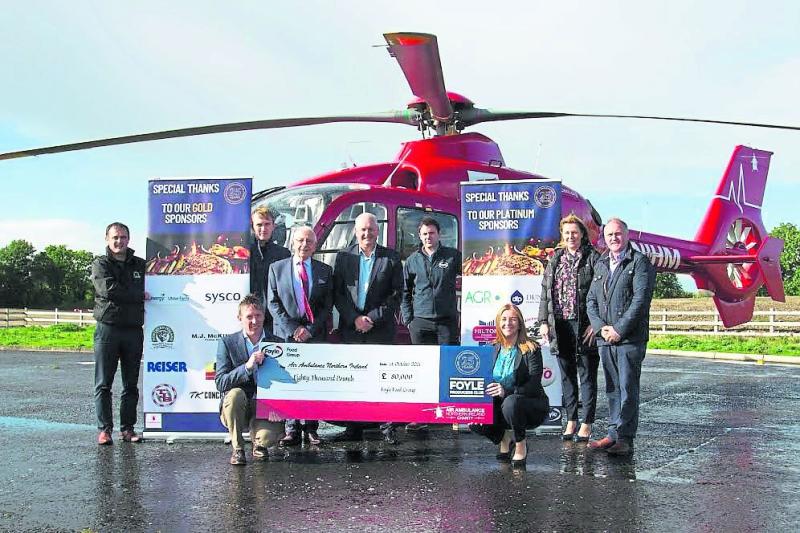 The people of Derry have been thanked for coming together in recent months to raise tens of thousands of pounds for a local charity on the back of its busiest month.

The Helicopter Emergency Medical Service (Air Ambulance Service) recently reported that July this year broke the record as its busiest month, with team being called out 78 times - three of which were in the Derry City and Strabane District Council area - and clocking up 44 flying hours in total.

The service, which aims to save lives, brains and limbs, has been tasked to the Derry City and Strabane District Council area 94 times from its inception in July 2017 to August this year.

The charity held its second abseil at the Tower Museum on the September 18 which saw 12 local people conquering the 100 foot drop on one of the city’s most iconic buildings. Mayor of Derry City and Strabane District Council, Graham Warke, attended the event to show his support for Air Ambulance NI.

Participating in the abseil were two members from the local Chamber of Commerce; Paul Clancy, chief executive, and Aidan O’Kane, Allstate NI director.

Abseiling alongside them were Karen McQuillan, finance director at Find Insurance, the main sponsors of this year’s Chamber dinner which Chamber president Dawn McLaughlin has chosen will benefit Air Ambulance NI. 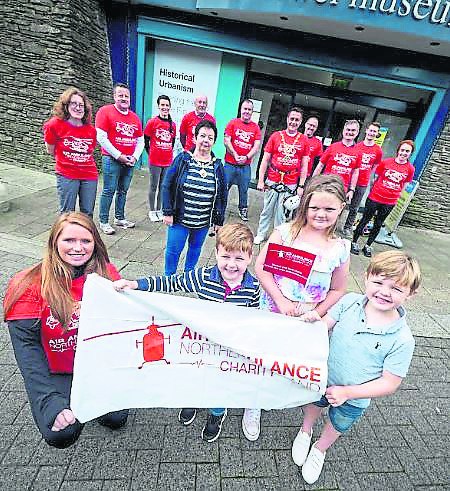 Dawn McLaughlin, president of Derry Chamber of Commerce, with participants who took part in the abseil of the Tower Museum in aid of the Air Ambulance.

Also partaking in the adrenaline fuelling challenge was Caroline Doyle who is a member of the AANI agribusiness group and agricultural business manager for Barclays who are match-funding Caroline’s donations.

City of Derry Young Farmers Club celebrated their 60th anniversary this year and decided to mark the milestone by raising funds for Air Ambulance NI in memory of member Gordon Crockett's father, David, who sadly lost his life last year in a farming accident.

The young farmers sourced a 60-year-old Fendt tractor and used it during a 24-hour plough at a family fun day in Eglinton in September last, the event raising over £7,000 for the charity.

Also, Foyle Food Group brought the agribusiness together at a barbecue.

Karen Kelso, group commercial director said: “It was lovely to be able to host this event both in recognition of the company milestone and to raise vital funds for the air ambulance given the downturn in fundraising through the pandemic. We were bowled over by the support of our farmers to the charity – we had 300 attendees on the evening and hundreds more bought tickets knowing they couldn’t attend simply to support this incredible lifesaving service.

“We would like to extend thanks to our almost 80 sponsors, all who supported the night and those who attended. Music from Richie Remo and Hugo Duncan was enjoyed by all. Foyle Food Group have raised a staggering £80,000 for the Air Ambulance NI charity.”

However, the community support hasn’t stopped there. As well as these two events, shoppers at local Marks & Spencer’s in Foyleside Shopping Centre have been donating through in-store collection boxes during the health pandemic.

Kerry Anderson, head of fundraising, said, “We want to send this special message of thanks to our supporters across Derry to let them know how much their support means to us.

"Quite literally the service would be grounded without you.  This has been the busiest summer to date for the service which costs £5,500 every single day to maintain.

“Although this service forms a vital part of the frontline emergency services in Northern Ireland, our lifesaving missions need kind and generous support just like the community efforts we have witnessed recently throughout the city. The Air Ambulance NI volunteers and supporters are like no other, and we are immensely proud to have them as part of the service.”