The retired accountant has been volunteering for over 20 years. 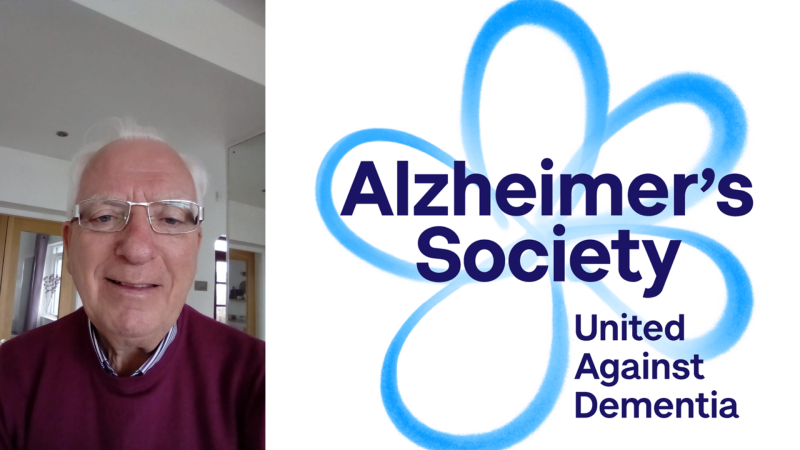 A retired County Derry accountant who has been volunteering for Alzheimer’s Society for more than 20 years has received special recognition for his long service.

Ed McAuley has first-hand experience of dementia as he supported his beloved wife, Myrtle McAuley, who lived with Alzheimer’s disease.

He began his role in Alzheimer’s Society as part of the Causeway Branch committee and was able to bring several valuable skills from the finance sector to his volunteer work.

Aoife McMaster, Alzheimer’s Society Dementia Support Worker for Causeway, explained why Ed who used to live in Coleraine but now lives in Portstewart is such an amazing volunteer.

“Ed has been a passionate supporter and volunteer for Alzheimer’s Society for over 20 years and throughout that time his compassion and dedication for making a difference to people affected by dementia has been unwavering,” she said.

“Over the last twenty years, Ed has adapted to and overcome many challenges, including the recent Covid 19 pandemic. His support for people affected by dementia as well as the local staff and other volunteers has been unwavering.

“Ed is a trusted expert in the Causeway area as he has been heavily involved with the Society longer than most of the staff and volunteers.”

Adrian Friel, Alzheimer’s Society Dementia Connect Local Services Manager, who was interviewed by Ed for the job 15 years ago, said: “Ed is a true asset to Alzheimer’s Society and a pure joy to work with. He has brought lots of passion and determination to ensure that everyone affected by dementia has the support they need.

“He is one of our longest standing volunteers and he has done so much for people living with dementia.

“Volunteers have been at the heart of Alzheimer’s Society since it was established here in Northern Ireland.

“I feel it's the best song I've ever written”

“We greatly value the time, skills and knowledge that our volunteers share with us and the difference that volunteering makes to our Alzheimer’s Society activities.”

Adrian continued: “The past two years has been tough for all of us. However, for people affected by dementia it has been a nightmare and people have told us of the isolation and the deterioration social exclusion has brought upon them.

"People living with Dementia have deteriorated quickly because of the pandemic.  There’s been frustration and loss brought about by lack of visiting in care environments by family members.

“Since the pandemic began, Alzheimer’s Society support services have been used six million times across the UK, showing that people affected by dementia need us now more than ever.”

Ed has also received recognition from Alzheimer’s Society CEO Kate Lee, who said: “There has been enormous change over the time Ed has been with us, and Alzheimer’s Society would not be the organisation it is today without the contribution made by brilliant volunteers like Ed, giving their time to support people with dementia and their carers.”