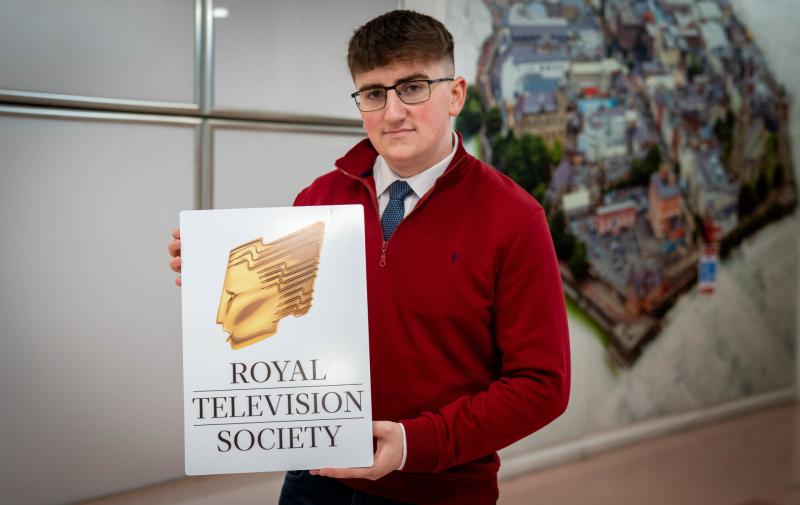 Derry film student, Aodhán Roberts, has spoken of his amazement at landing a prestigious scholarship award.

Aodhán, who is a first year Cinematic Arts student at Ulster University's Magee Campus in Derry, has been awarded a Royal Television Society Bursary Scholarship.

The Royal Television Society (RTS) Bursary Scholarship will support Aodhán financially with £1000 per academic year of study as well as providing free RTS membership, access to events and an industry mentor working in his chosen field.

In 2019, Aodhán lost his grandmother, his mother’s partner and his own mother in just a few months. At the age of 17, he found himself on his own, with no legal guardian or financial stability.

However, he refused to let these tragedies crush him. It was while studying creative media in college that he created ‘Derry Footage’ that gave him a chance to create a sense of community and togetherness in Derry and share untold stories that deserved greater attention.

In 2019, he released the short film ‘Impairment’ to bring attention to the recurrent problem of drink-driving and was shortlisted in several film festivals. In 2020, he released ‘Overcoming adversity as a community’ which showcases the unique sense of community in Derry and how we can pull together during times of crisis.

Aodhán said: “I really don't know how I keep getting all this window of opportunity and in a way, I sort of feel really engulfed by everything that's been presented to me but simultaneously I am honestly elated, to say the least.

“This is such an amazing way to end the year for me. From a 'troublemaker' in secondary school expected to get no GCSEs, to a young man that graduated college with leading top grades to now a university scholar.

“To be a recipient along with 38 other people who have also received an RTS bursary scholar is astonishing to me. I am one out of two people in Northern Ireland that has received a scholarship.

“I will be joining a powerful network of media professionals who bring with them a wealth of experience and creativity. As always, I will be opening myself for opportunities to learn; develop and flourish in a thriving community full of relatable professionals whilst on this experience for the next few years.

“This RTS Bursary Scholarship will support me with £1000 per academic year of study as well as provide free RTS membership, access to events and an industry mentor in my field. There's nothing more I could possibly ask for.”

For Aodhán, filmaking is his job, his education and his happiness. Being a Derry local, the Cinematic Arts course at Magee was an obvious choice,

He added: “The Magee campus is just around the corner and it was important for me to stay local. The Cinematic Arts course is one of the top rated film courses in the United Kingdom and has everything I need to help me succeed in my chosen career path.

“To be studying and collaborating in this hub of creative people from so many diverse backgrounds is a dream come true.”

Aodhán didn’t take the traditional route to university and indeed was withdrawn from mainstream schooling for a number of years.

However, thanks to the proper support and guidance he was able to finish school with nine GCSEs and progressed to the North West Regional College where he studied Creative Media, graduating with triple distinction. He hopes his story can inspire other young people in similar situations,
He continued: “I have had a difficult time in terms of education due to a number of personal circumstances but I am so proud to have overcome these obstacles and to be studying my dream course.

“My message to other young people out there is to never give up, to keep trying and make your dreams a reality. Filmmaking is my passion and this prestigious Royal Television Society Bursary Scholarship will help and support me to become a better filmmaker.

“Thanks to a mentor and network of current and former scholars I will be able to build up contacts in the industry and hopefully collaborate on lots of exciting projects.”

“He is a great role model for any young person who wishes to pursue a third level education degree.

“We look forward to continue working with and helping Aodhán achieve his BSc in Cinematic Arts, I have no doubt he will flourish here.”