Tommy Walls was a central pillar in the Mid Ulster snooker scene. 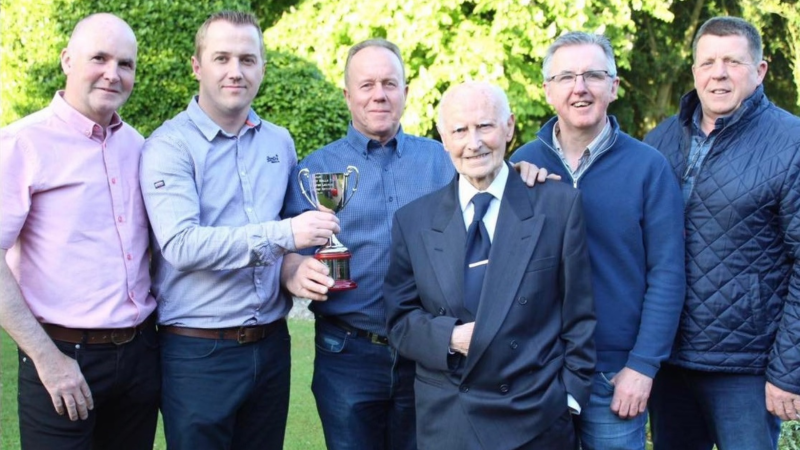 Tommy Walls presenting the cup named in his honour.

A County Derry snooker club has paid tribute to one of their local heroes who once beat Alex 'Hurricane' Higgins.

Tommy Walls, who passed away last week, has been described as 'legendary' in local snooker circles, with his club, St Patrick's Snooker Club, Magherafelt, leading the tributes.

“To this day, when playing snooker across the country, once you mentioned you were from Magherafelt the inevitable response is “Do you know Tommy Walls?'

“In his playing days he was a top class competitor and mixed it with the best in the business. One of his most memorable stories features in a book penned by Dennis Taylor when the Magherafelt man toppled the mighty Alex ‘Hurricane’ Higgins.”

Tommy's legacy stretches long beyond his playing days, and he was instrumental to ensuring the survival and development of the game within the Mid Ulster area.

“When his best playing days were perhaps behind him he didn’t turn his back on the game,” said the club.

“He organised the Mid Ulster Snooker League for 35+ years, which is an unbelievable commitment and no doubt it was this dedication that kept the game alive in the area.

“When he handed over the reins in the late noughties, the game was still in a healthy state and we are all indebted in a way to Tommy that the Mid Ulster league is still being played to this day.”

As a symbol of their gratitude, the Mid Ulster League named a trophy after Tommy, and the club said seeing him presenting his own trophy was an emotional moment.

“A few years back many of the players felt that it would be a fitting tribute to name one of the Mid Ulster league competitions after Tommy.

“We consider ourselves fortunate that Tommy was able to attend to present his own trophy.

“As a club we have our own piece of history on the wall in the club, Tommy produced a great article detailing the history of our own club from its founding in 1926 and is well worth a read for any local.

“It was also fitting that when the club was rebuilt in 2009 that he played Joe Swail on the opening night. A fitting tribute for a great snooker man.”