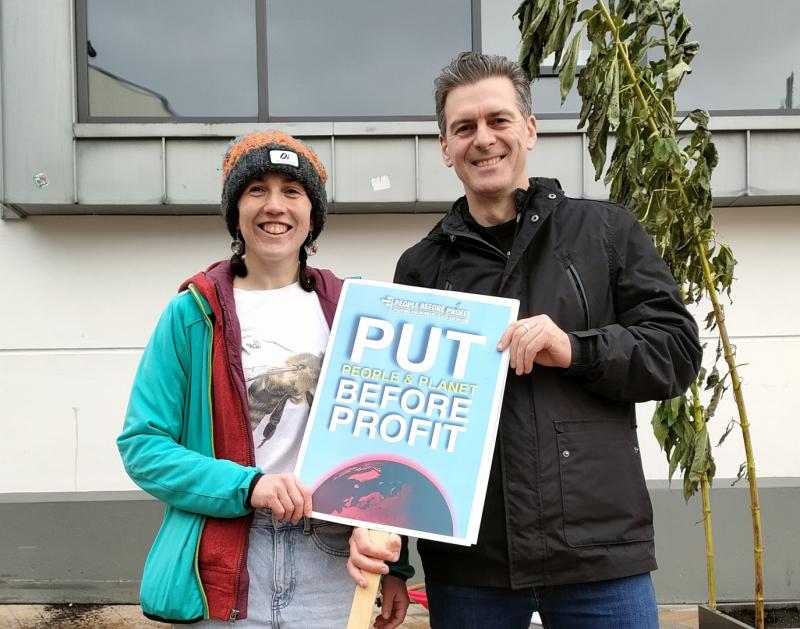 People Before Profit Councillor, Shaun Harkin, has thrown down the climate change gauntlet to the Executive parties insisting that actions speak louder than words.

Cllr Harkin, who represents the Foyleside ward, was speaking after Saturday's Global Day of Action rally in Derry where many turned out to march – in unison with other world cities – to send a message to politicians that too little is being done to halt climate change.

Many figures from the Executive parties in Stormont have commented on how environmental changes need to be enforced to curb rising temperatures that could have a disastrous effect on the world with many land area at risk of being submerged by rising sea levels.

However, Harkin claims such talk is nothing more than hot air and that politicians need to make good on their words with action.

He said: “We commend all those who joined climate action now rallies in Derry and Belfast, across Ireland and across the world yesterday.

“It was a powerful global day of action in defiance of the superficial proposals of elites gathered in Glasgow at COP26.

“All five of the Stormont Executive parties ran to the exclusionary Glasgow conference to join the political establishment in an attempt to showcase their newly found environmental credentials.

“As Greta Thunberg said it's been more 'blah blah blah' from elites.

“Rather than acting as a protector, the Executive has spent the last two decades doing immense damage to our environment.

“What the Stormont Executive parties say and do is very different.

“Just months ago the SDLP Minister for Infrastructure rammed through continued corporate gouging of Lough Neagh over the opposition of environmental campaigners.

“The entire Executive allowed the DUP to run riot with the climate destroying 'going for growth' agribusiness strategy for over a decade.

“Sinn Féin and others said nothing because profits were high and it was good for elites. The same inaction is true for the RHI 'cash for ash' debacle.

“The same action gap is clear when it comes expanding rail and public transportation.

“The lack of urgency from the DfI Minister means it could be a decade before the Derry rail upgrade happens – if at all. And there are constant threats to slash funding for public transportation in order to open it up to privatisation.

“The same inaction applies to cleaning up the toxic Mobuoy dump, air quality and toxic mining in the Sperrins.

“There are real solutions to address the climate crisis. This requires challenging capitalism's drive for profit no matter what the consequences are for communities and nature.

“The political establishment in the Stormont Executive, the Dáil and Westminster are not up for this because it means challenging elites, challenging inequality and challenging the status quo.

“If Stormont manages to finally pass a Climate Act, the Executive cannot be trusted to ensure even its limited goals will be acted on.

“We need a real alternative to the bluff and bluster of the Stormont Executive parties. People power is the key to seeing real action on climate change that can deliver a green transition protecting workers and making sure no one is left behind.”