The school picked up a national award for pastoral care. 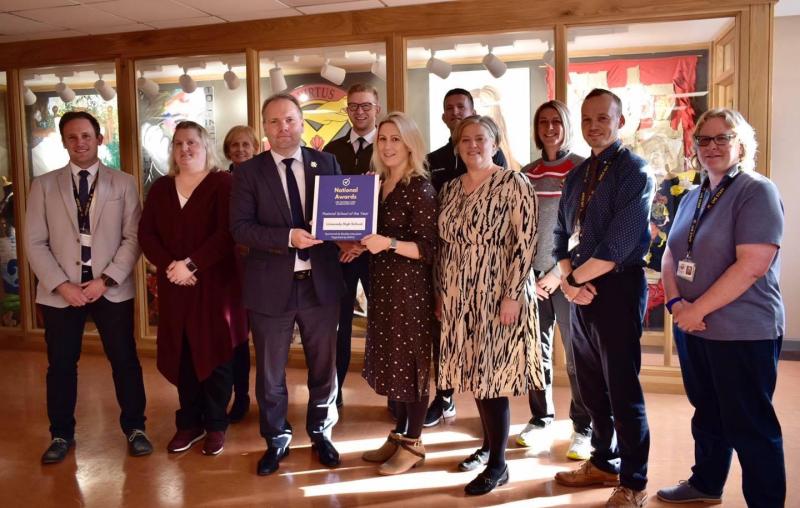 A County Derry secondary school has been celebrating after they picked up an award at the prestigious National Awards for Pastoral Care in Education (NAPCE).

Limavady High School was announced as 'Pastoral School of the Year' for 2021 last month, coming out on top of a number of schools across the UK.

The awards, founded in 1982, recognise schools, educational professionals and agencies who have an interest in pastoral care and personal-social education, as well as the welfare of students of all ages. Principal Mr Darren Mornin said they were delighted to receive their award.

“The standard of schools nominated was excellent, from all around the UK, and to come out on top is such a fantastic achievement,” he said.

“This award is fantastic recognition of the outstanding pastoral care the school has in place to support all our pupils.

“I would like to pay tribute to Miss Fisher, Vice Principal - Pastoral Care, her team of Pastoral Leaders and all staff, Teaching and Non-Teaching for all their dedication and support to our pupils.”

The school was nominated in recognition of its dedication to promoting and supporting mental health and wellbeing.

Judges were impressed by the school’s focus on Trauma Informed Practice and supporting pupils at risk of underachieving.

The work of the PTA, who provided 60 hampers during lockdown, was praised as was the relationships the school has created with external agencies who provide workshops and mentoring.

Staff at the school were also nominated as finalists in three further categories.

Miss Fisher was a finalist in the 'Pastoral Leader of the Year' in recognition of her work on diversity and inclusion.

Mrs McCartney was nominated for 'Pastoral Member of the Year' due to the support she provided for Sixth Form students during lockdown.

The schools Heads of Year and Heads of Key Stages also received a final nomination for 'Pastoral Team of the Year' for their focus on wellbeing and personal relationships.

“Our school has always been well known for its strong ethos on Pastoral Care and we have continued to invest in resources to further enhance the facilities and support we can offer,” he said.

“Recently we have opened our new wellbeing room and updated our sensory room for pupils to use. We have also just started work on the Investors in Pupils and wellbeing accreditation programmes.”

Plans for the building had been announced by a local electrical firm in March 2021.