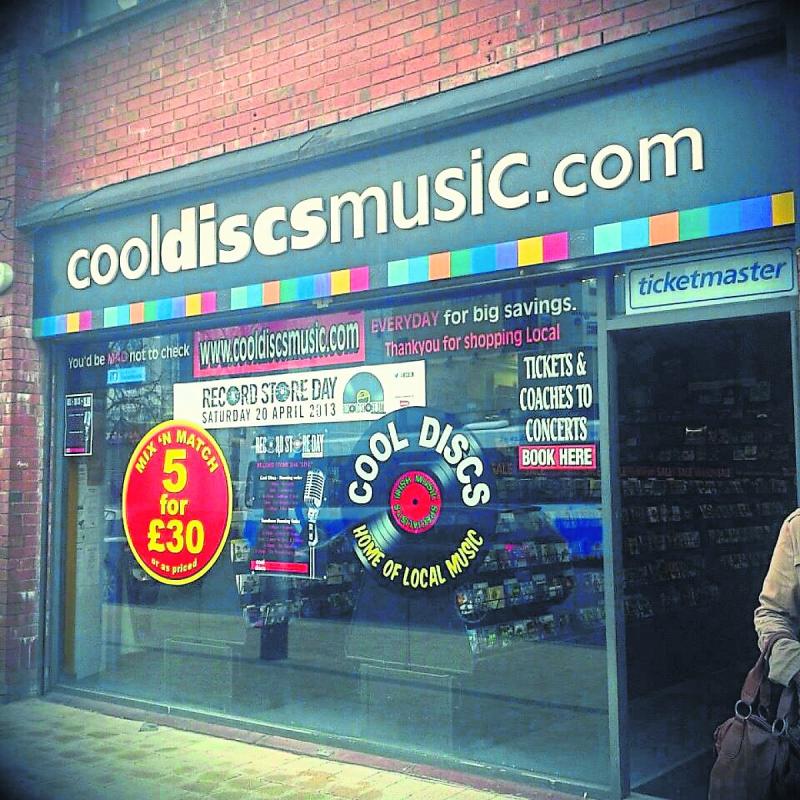 Cool Discs opened 25 years ago sometime around now; it’s been in the same spot since then.

You really shouldn’t miss it. I’ve been going there since I was 15 and worked there from 2011 or 12 up to 2019, before, during and after - it is the buried treasure of Derry where a musically obsessive Evertonian can have a cup of whatever and a yarn. Maybe even buy a record.

Over the years, I have got to know some great characters as co-workers, customers, and friends. There isn’t space to write all the messages or even the entirety of those that are here.

WALLY: “The fact that Cool Discs has been open 25 years and weathered the digital onslaught is a testament to Lee’s character. So many small independent shops have closed everywhere, yet he is still standing and proudly supporting local artists and providing them with an outlet for their mu- sic to be heard and sold. Fair play. Here’s to the next 25.”

PADDY NASH: “A lifeline for local independent musicians and a vital service for new and old music lovers. If music in Derry had a Pope, it’d be Lee.”

DECLAN McLAUGHLIN: “25 years of service to music. Cool Discs has always been more than supportive of the local music and musicians. Always promoting and pushing the sounds of this wee city, it’s been a mainstay of its musical life…”

JIM HEALY: “Being a music lover and vinyl record addict, getting an opportunity to work in one of Irelands best independent record stores, was a dream job come true for me. I worked in Cool Discs for six years 1998-2004, as the dance buyer, bringing in records. I’ve met some great people and made friends, with people who have been over the Cool Discs doors. Here’s to many more years”.

EAMONN McCANN:  “Cool Discs is a vital part of the cultural infrastructure of Derry. We like to big up our achievements in the arts. But it is in the realm of popular music that we shine most brightly in the world. Lee and everyone else at Cool Discs are entitled to recognition of their centrality in sustaining the artistic and intellectual level of local life … ’Local’ is the key word here.”

DESI BEATTIE: “When he told me, he was opening his own record store, I knew it would be different than the big chain stores, I worked there for about 2 years, learned so much about music past and present, from both Lee and Jim who also worked there. Lee's attention to detail within the shop, showed this was a business he really had a passion for. I can't believe it's 25 years”.

JASON FREEMAN:  “I’m proud to work in an independent record store, particularly one with such an established name. Every day is exciting and a bit different, meeting new people and other music fans. It’s a joy to spend all day talking about and listening to music, I’ve discovered things I didn’t think I would”

DYLAN BRADLEY:  “Cool Discs is the greatest day job in the world for a musician. Constantly getting to hear the best new music out every week, learn about new bands you’ve never heard of before and talking to customers and co-workers that passionately love the same thing you do. What a wonderful place.”