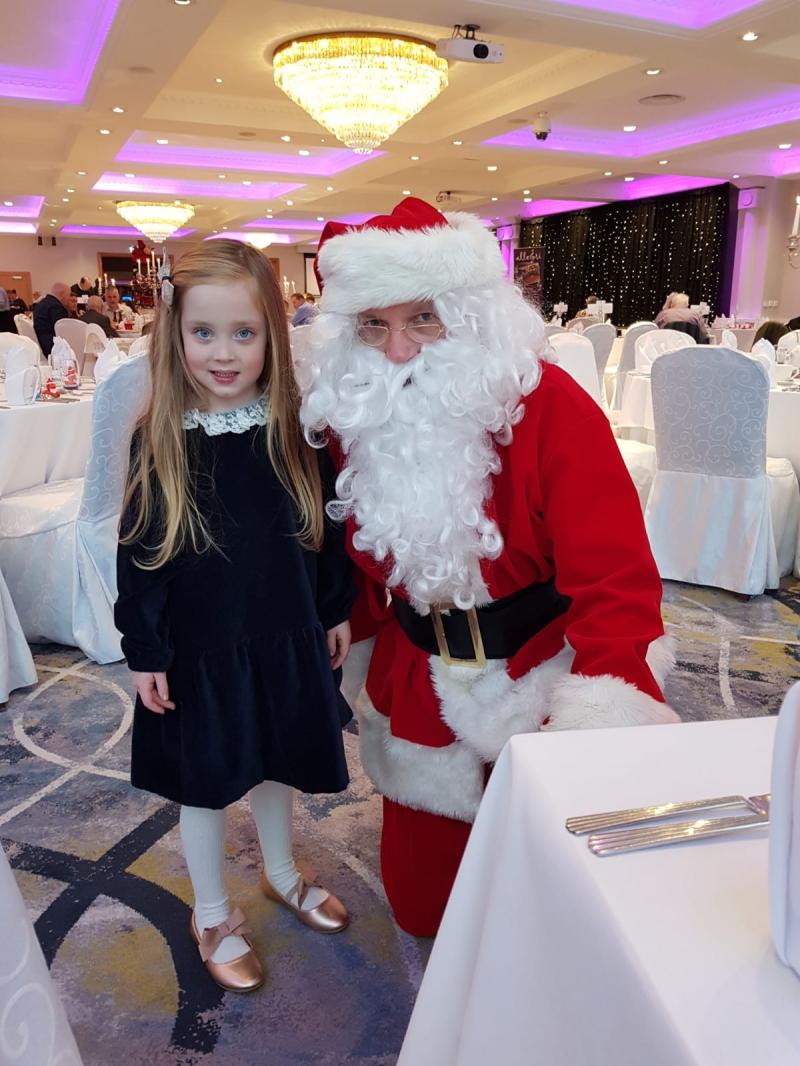 A trip to see Santa is a traditional part of the run up to Christmas, but after queuing for a five minute audience with the big man you start questioning if it is really worth it. This year my family bypassed all that at the ‘Santa Sunday Buffet Lunch’ at the Everglades Hotel, which is a much of a treat for the mammies and daddies as it is for the kids. Like half of Derry, my two are dosed with the cold but I wasn’t for missing this so I got out the Calpol and the Tixylix and put them in their Sunday best. We swept into the hotel lobby in a cloud of Vicks Vaporub where we were greeted by a stunning Christmas tree, a Santa’s sleigh and a six foot polar bear. All thoughts of chesty coughs were quickly forgotten as we were handed a glass of mulled wine (him) and an alcohol free hot cider (me). We were shown to our table and given the low down on the five course feast that awaited us. The children’s attention was elsewhere though because Santa was doing the rounds, stopping at every table for a photo and a chat. He reassured our daughter that she was on the nice list and her LOL Doll would be under the tree on Christmas morning. And he told our son that the elves could definitely rustle up a few cars if he kept up the good behaviour. As you would expect from The Everglades the food was top notch, but for me it was the service that really stood out. Nothing was too much bother and everything was done with grace and ease. Just when I thought things couldn’t get any more relaxed and festive the Allegri Choir took to the stage and serenaded us with Christmas classics. Much as the kids enjoyed their meal, the dessert was definitely their highlight with a ‘pick ‘n’ mix’ trolley, popcorn machine, and shelves heaving with gateaux. After this we had a second audience with Santa who took lots of time to chat with the children and pose for photos before giving them a selection box, which I’m ‘looking after’ for them. Children’s entertainment is also laid on with Lego, arts and crafts, toys and computer games all over seen by lovely team who also do face painting and balloon modelling. The lady in charge even took time out to recommend some remedies for children’s hacking coughs that had made a reappearance.   Relax     All that was left for us to do was relax with a coffee while the children played with their new found friends. Professional photographs are also available in reception starting at a very reasonable £8. ‘Santa’s Sunday Buffet Lunch’ is served from 12.30 - 3pm on Sunday 9th, 16th and 23rd December. There is a children’s entertainer from 1 – 4pm and you can soak up the Christmas atmosphere with live music from local choir Allegri between 2 – 3pm on the 9 th and 16th December. The price is £28 per adult with a glass of Mulled Wine or Non-Alcoholic Mulled Cider on arrival and £14 for children under 12. For further information and reservations contact the Everglades on  028 7132 1066 .
ADVERTISEMENT - CONTINUE READING BELOW