50 years since Burntollet: 'March was a plot point in history of Troubles'-Eamonn McCann 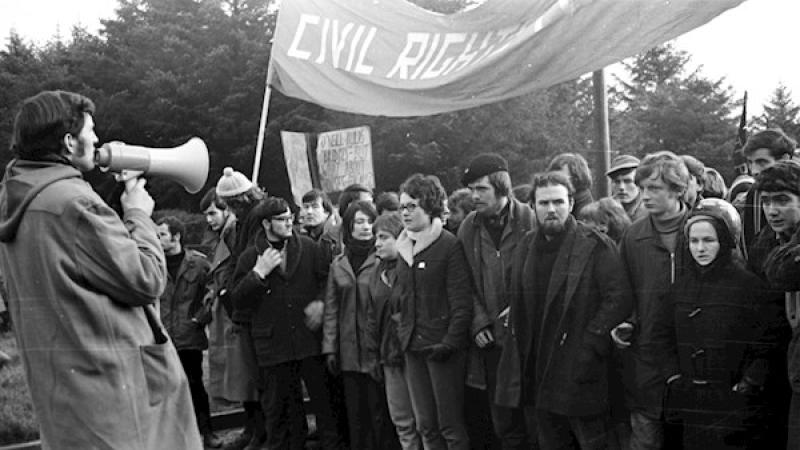 One of the principal participants in the People's Democracy march between Derry and Belfast 50 years ago says the event was a "plot point in the history of the Troubles."

Eamonn McCann was on the four-day long demonstration between Belfast and Derry half-a-century ago.

He told the Derry News: "I remember it as a violent experience. The march was attacked so much that it was an almost constant assault. We were attacked at Antrim, Randalstown, Maghera and of course at Burntollet.

"We left Belfast with around 80 marchers. The march itself was absolutely peaceful. No one retaliated at all."

The journalist and political activist recalled that discussions on the possibility of a march to Derry began in earnest in November or December of 1968.

"We talked about it a 'very soft' way to begin with. But, it was decided that it would be peaceful no matter what was thrown at us. The march was described as being 'irresponsible', but what it would show was the underlying violence of the state," he said.

Like many of the demonstrations of the era that would end in violence, the initial stages of the People's Democracy march to Derry began cordially on the streets of Belfast.

But as the long walk ahead developed McCann recalled that he chided two young women behind him for their 'constant chattering' as he was trying to listen to what was being announced.

As the Troubles burgeoned into a deadly conflict, he discovered years later that the two Belfast women had gone on to join the IRA and also served many years in prison.

"I realised years later that it was Dolours and Marion Price and I had asked them if they would ever shut up!

"It's small things like that which come into my mind when I think of what happened. I was also one of the few that emerged from the attack with no blood drawn or broken bones. I had a few bruises, but that was it," he said.

Estimates suggest that around 100 of the demonstrators were injured with some of them requiring hospital treatment.

The lack of backing for the four-day march from trade unions and nationalist political parties and figures according to Eamonn McCann was not a deterrent to the demonstration going ahead.

"As the days went on we got up to around 500. But, by time we reached Derry there was around 5,000 there to greet us. To me it that was proof of how events themselves can transform into something of significance.

"I doubt if we had not been attacked that anyone apart from those who live there would ever have known where Burntollet actually was. The attackers and the RUC changed that.

"It was a legal march. We had nothing to shield us from the people assaulting us. So, it was absolutely a transformative event," he said.

Whether he knew it or not at that time, if he didn't realise the depth of the physical power of the Northern Ireland state, the powerful figures behind the same state had certainly become aware of who Eamon McCann.

The Cameron Report of September, 1969 was a British appraisal of the events in Northern Ireland since October 5, 1968. A section of the report covered some of the prominent individuals and organisations within the wider Northern Ireland Civil Rights Association. This included The People's Democracy movement that had grown out of student agitation at Queen's University.

Lord Cameron's report said of McCann:"Mr McCann, a former student of Queen's University, while dedicated to the same political objectives (as People's Democracy), is even more active in their promotion.

"He has been associated with a now defunct 'Irish Workers Group' in London- a group whose political affiliations and aspirations were closely aligned to those of the Young Socialists Alliance, and also with those of the 'Irish Workers League' an organization understood to be centered in Dublin.

"Mr McCann's part in these disorders were considerable: He was a principal advocate of the 5th October demonstration in Londonderry.

"His conduct and speech when the march was stopped at the police cordon was not in favor of peaceful dispersal, and throughout he has been an advocate of actions and measures which, on the face of them, were designed to serve the purpose of achieving maximum publicity, and at the least to render likely a confrontation with thew police and demonstrators which could readily develop into violent disorder.

"He was particularly active in the organisation of 'Free Derry' and in the operation of its short-lived radio broadcasts.

"We regard him and his aims and activities applying an important part in the agitations which are associated with the disorders of October onwards."

The Derry News asked Eamonn McCann if what transpired at Burntollet was an example to him and others that the northern state was determined not going to deviate from using its physical power to quash the demands for civil rights?

He said:"It certainly brought home that home to us. It demonstrated more however that the state dreaded socialist politics and its capacity to reach across the sectarian divide. State violence is inherent in every class divided society.

"Michael Farrell and I had certainly discussed that in the very early days. I think there was a possibility of a strong degree of unity until internment was introduced. It ended on Bloody Sunday of course. From then on that option was cut off. All options were cut off.