CENSUS 2021: Drop in those identifying as 'British only' in Causeway Coast and Glens

There has also been a 15% increase in those identifying as 'Irish only'. 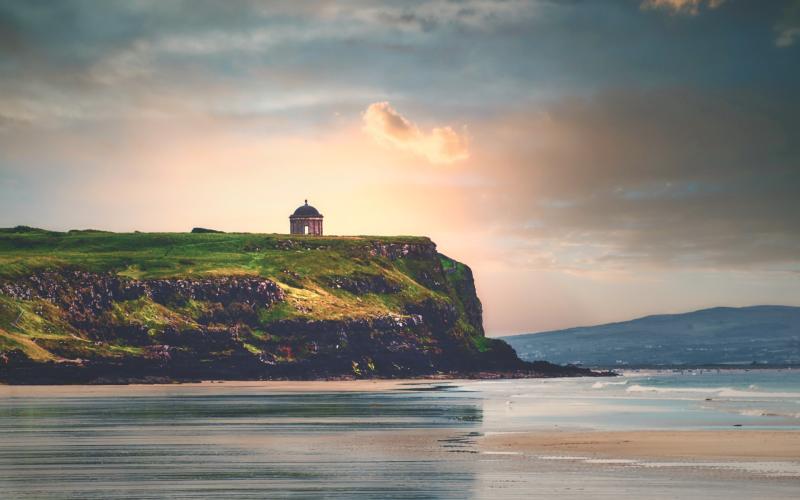 Causeway Coast and Glens Borough Council has had a unionist majority since its inception. Pic: K Mitch Hodge/Unsplash.

The number of people within Causeway Coast and Glens Borough Council who identify as 'British only' has fallen significantly since 2011, the results from last year's census have shown.

Data released on Thursday as part of the 2021 NI Census has shown a decrease of around 15% in those identifying as 'British only' in their responses.

Causeway Coast and Glens Borough Council has maintained a unionist majority since its inception, with 20 members from unionist parties and a further two independent unionists elected in 2019. 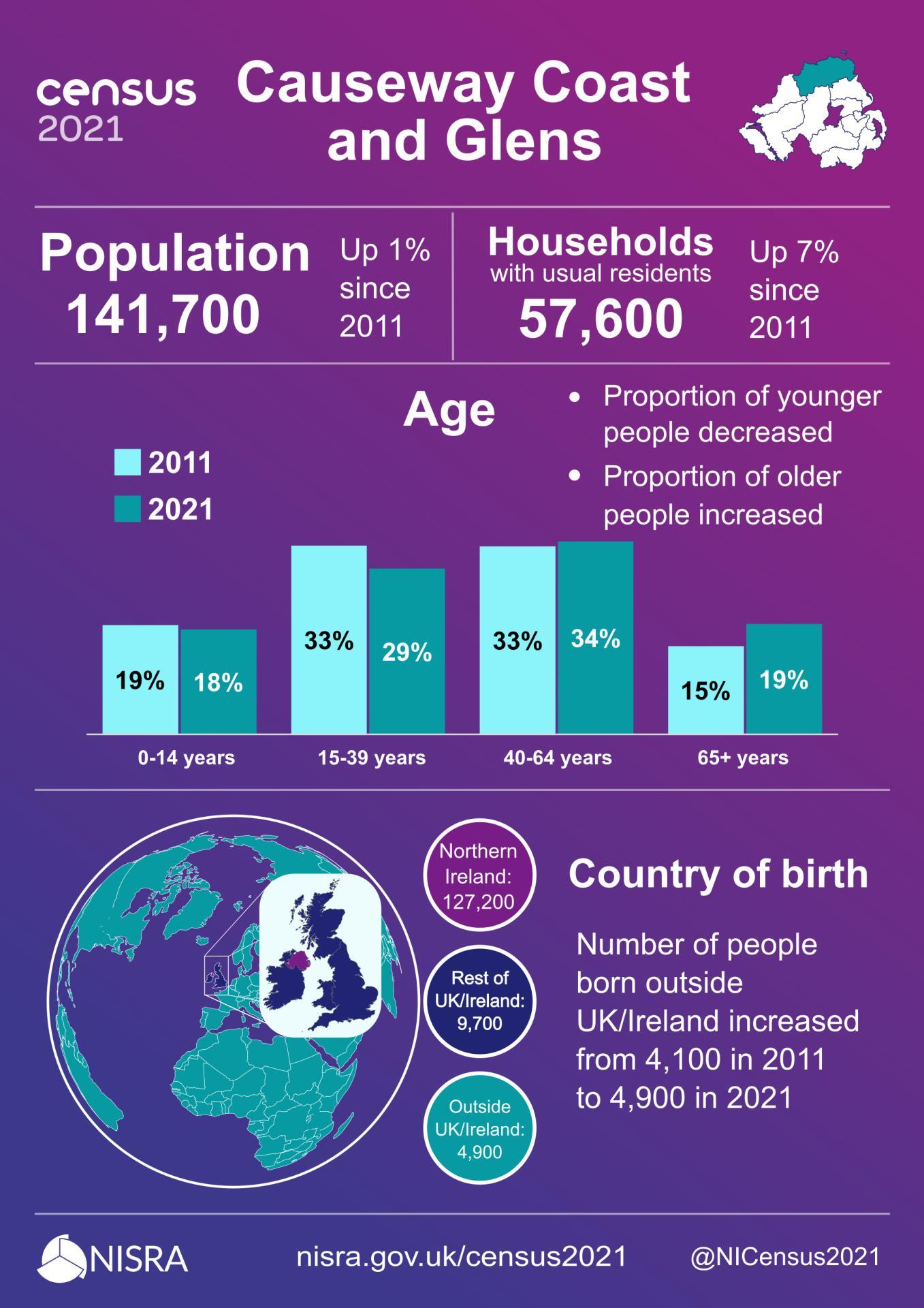 Some of those no longer ticking the 'British only' box may have altered their outlook slightly, with the figures showing a 36% increase in those identifying as 'British or Northern Irish only'.

There was also an increase of 65% in those identifying as 'Irish or Northern Irish only', however the percentage only accounts for an extra 853 people.

The numbers identifying as 'Northern Irish only' stayed largely the same, with a 2% rise representing an extra 663 people since 2011.

Passport data has also changed dramatically, possibly owing to the UK's exit from the European Union in the intervening years.

Numbers holding both a UK and Irish passport have increased dramatically, albeit with a relatively low total compared to those who hold single passports.

In keeping with the overall Northern Ireland figures, the number of people who deem themselves Catholic has also risen in Causeway Coast and Glens, albeit by a paltry 2%.

The figure marks an extra 1,224 people, but is in contrast with a 6% drop in those who chose Protestant on the form.

According to the latest census, there are now 4,652 less Protestants in the Causeway Coast and Glens Borough Council area.

With a 2% rise in Catholics and a 6% fall in Protestants, there is little surprise that the area recorded an increase of 18% for those choosing 'no religion' on the form.

The figure marked an extra 3,520 people in the Borough indicating they were of no religion in comparison with the 2011 census.

With an overall population increase of 1%, there was a difference of just 869 people between the 2011 and 2021 census records.

However, in keeping with the NI-wide results, the breakdown in ages revealed a population that is ageing, with 26% more people over the age of 65 living in the Borough than a decade ago.

There may be disappointment among the Borough's Ulster Scots speakers that Causeway Coast and Glens did not top the table for those with 'some ability' in the language.

The same figure for Ulster Scots was recorded as 3,232 within Causeway Coast and Glens Borough Council, 2% of the area's population. 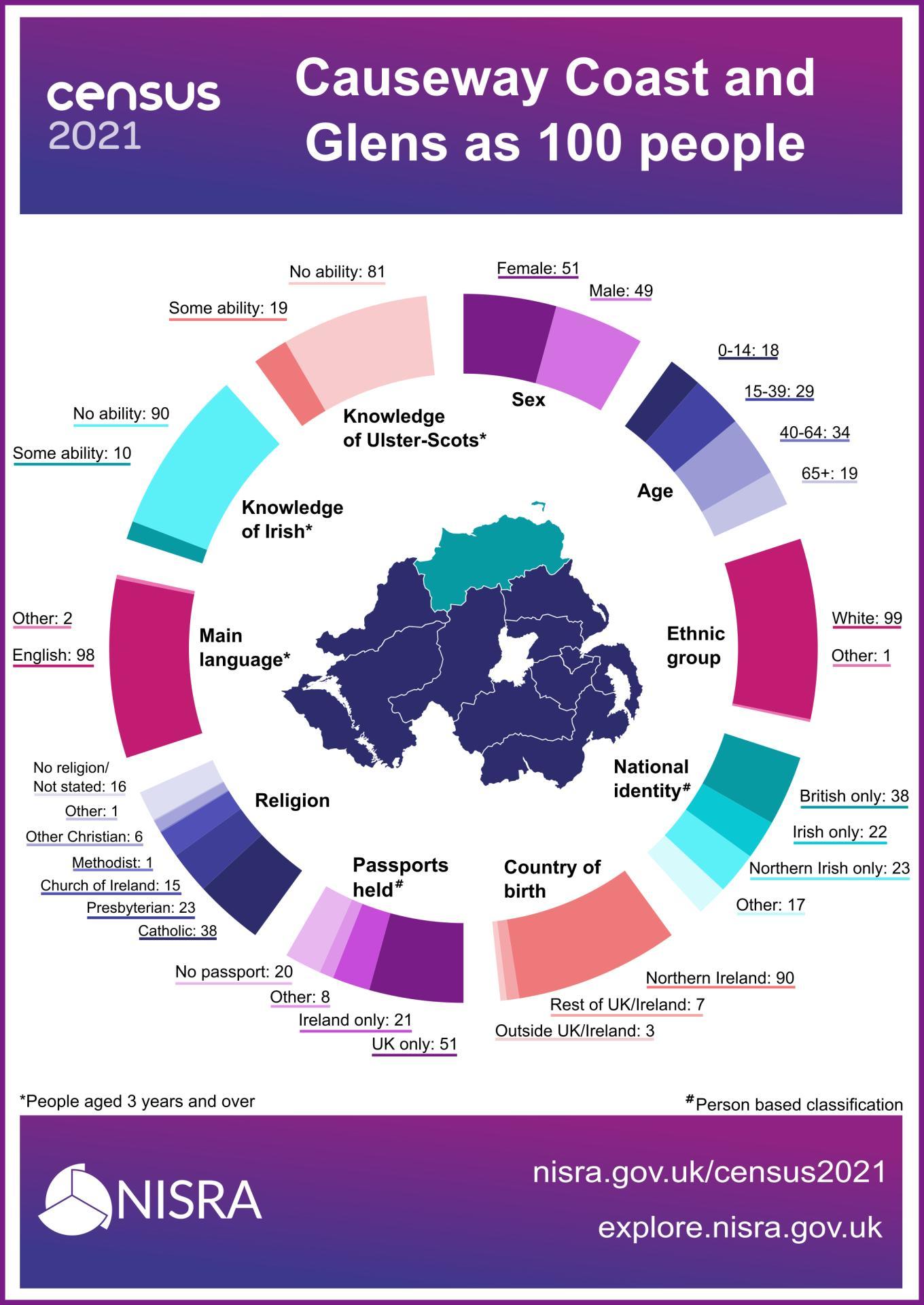 Polish was the second most popular main language in the area, with 1,524 people, while Irish was in third place with 231 and Romanian fourth on 79.

Causeway Coast and Glens Borough Council is overwhelmingly of white ethnicity. Just 1.45% of respondents to the census selected an ethnicity other than white.

Its 98.55% figure for those of white ethnicity was the highest of all eleven council areas, meaning the district is the least ethnically diverse in Northern Ireland.

The council also has the largest percentage of residents born in other countries.

In terms of country of birth, 90% of all respondents indicated they were born in Northern Ireland, with the next largest percentage (4.23%) of residents being born in England and 1.93% in Ireland.

Outside of the UK and Ireland, 1.93% of Causeway Coast and Glens residents were born in other European Union countries.