'Get to know what is normal for your body' 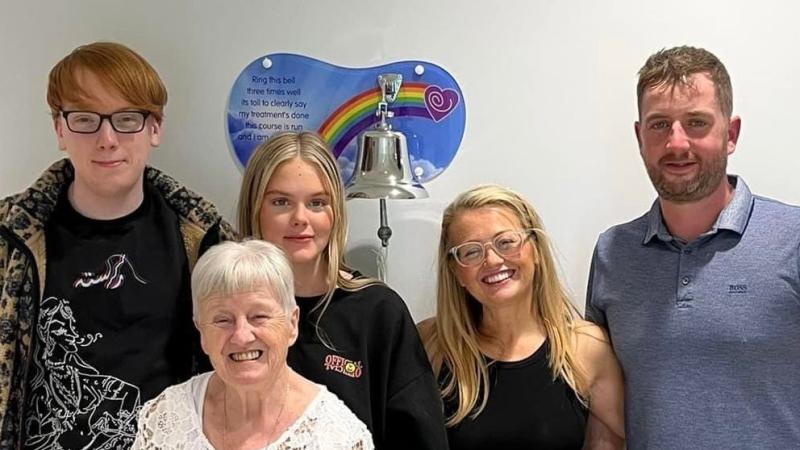 Disarmingly faff-free and frank, a courageous Marguerite Burke (48) said she was not planning on dying any time soon!

Following her recent double mastectomy and follow-up cancer treatment, Marguerite, was able to ‘ring the bell’ at the North West Cancer Centre in Altnagelvin area hospital earlier this month.

Speaking to Derry Now, she urged anyone reading her story to really get to know what was ‘normal’ for their body.

“Do not ignore anything,” Marguerite advised. “I know doctors are busy but they will be glad to see you if you are concerned about any lumps and bumps.

“Know what is usual for you. Get seen. Seek advice. If I had left it any longer, It could have been worse. Please do not ignore anything that is unusual in your body.

“Look out for lumps, bumps, puckering, nipples going in, all that kind of stuff. It is good to know all of those signs but the better sign is to know what is normal for you.” said Marguerite.

Creggan born and bred, Marguerite, revealed she had been attending the doctor for about eighteen months with various symptoms including tiredness and weight loss, before her diagnosis.

“I had just lost my dad, Willie Burke, two years prior, so there was a lot going on. He also had a cancer diagnosis. That was hard. My mammy, Norah, is still living. Mammy is 12 years cancer free. She is just amazing. It was because of her attitude that I managed to get through all of this.

“On Easter Sunday night, I was having a shower and I felt something hard. It was completely different to anything I felt before. It was very, very hard. It was definitely a lump.

“I felt it again the next night. It was still there. My partner, Paddy (McDermott), also felt it. By Wednesday, there was no denying I had a lump. I had no problem getting an appointment with my doctor because GPs would rather see you 100 times than red flag you once.

“In the surgery, I looked down and the nipple had started pulling in. I looked at my doctor and she looked at me and asked, ‘Is that new?’ I said ‘Yep, that is brand new’. I knew and I knew she knew. By Friday puckering had started and I knew what it was. We had this moment and it was textbook,” confided Marguerite.

Marguerite got her hospital appointment a week later.

“The NHS staff are angels sent to this earth,” she said. “But, I would love to speak to the people who make the decisions and the politicians,” she said with her, by now, appealing directness.

'Overwhelming generosity' of the community in Derry and beyond praised

'Striking because we can't afford to live'

“I would say, ‘You should be ashamed of yourself for what you are doing’. Robin Swann is the only one I have any time for because he is the only one that did his job. A hard job he had to do and he put politics aside. I have so much respect for Robin Swann. He did what was best for the people.

“By this stage, I knew the situation was real. I I knew what it was. I just didn’t know how bad it was. I tried to prepare my partner. There were also five young people to consider, my two and Paddy’s three children.

“All I wanted to know was’ ‘Is this terminal? Am I going to die?’ said Marguerite, whose father had received a diagnosis and died within a week.

When something like that happens in your own family,” said Marguerite, “you become acutely aware of your own health.”
At the Breast Clinic, Marguerite, underwent two mammograms, an ultrasound examination and a biopsy, all in one morning.

She said: “You will find out at the end of the day whether you have cancer or not. The longer you are there, the more likely it is that this is what is happening.

“Paddy was allowed to be with me while I was talking to Mr Harron, the consultant, who has the worst job ever. He was very straight and direct, which I appreciated. He told me straight away, ‘You have cancer’.

“At that moment, everything faded away. A bomb could have gone off beside me and I would not have heard it.

“I said to him, ‘Is it terminal?’ He said, ‘No’. After that I didn’t care and I was glad paddy was there to take in a lot of the conversation. I just thought, ‘I am not going to die so whatever needs to be done, needs to be done. Yes it was s… but it wasn’t the worst,” said Marguerite.

Smiling, Marguerite said Paddy could not believe she had asked that question.

A reflective Marguerite said: “Cancer is very individualistic. No two people will ever have the same journey because no two people are the same.

“Michelle from the Pink Ladies says there is no such thing as a wee bit of cancer. I don’t care who you are, the minute somebody says those words to you, it changes your life.

“I am a different person now than I was before my diagnosis. Physically I am changed. I sound different. I think I look different. I had to be put straight into menopause beacuse my cancer was estrogen positive. I feel it has made a change to my voice. It sounds deeper. Physically, it is a mess. I had a double double mastectomy and my nipples were removed.

“This was radical surgery. It is a loss for me personally. It is really hard. I am a girlie person and I struggle and it is still a mess, although I had immediate reconstruction. When I got to ‘ring the bell’ therethat was not the end. It was more the start of another journey because I was so focused on getting to that point, I don’t think I have really taken stock. I am feeling more emotional about things now,” said Marguerite.

Warning against making assumptions about a person’s health based solely on their appearance, Marguerite said: “It all looks nice but I am dressed, I have the makeup on and the hair washed.

“But I am sweating due to the hot flushes I am experiencing since being put straight into menopause. But I would have died had that not happened. I am shortly going to receive counselling through Macmillan Cancer Support.

“I am processing my whole experience now. Thankfully, I have not been left on my own. I am getting support. The Pink Ladies in this town are amazing. I can’t say enough about them.

“As women we do not let ourselves off the hook. We have so many responsibilities and we don’t want to let anyone down but in the Pink Ladies I can let my guard down and say, ‘I feel terrible today’. It is a totally safe space.

“I look like the healthiest person you have ever met and I don’t want to walk about in a shroud, so I put on the face and do what I need. But I am not well. People need to stop having the perception of a cancer patient as someone with no hair and be kind,” said Marguerite.

“No matter how hard it gets and it has been physically and mentally hard, I would still do it all again,” she said.

“It’s life and you just have to get on with it. My mammy’s attitude when she got her diagnosis 12 years ago was, ‘It’s not my time’ and that’s my attitude now.”