'Striking because we can't afford to live' 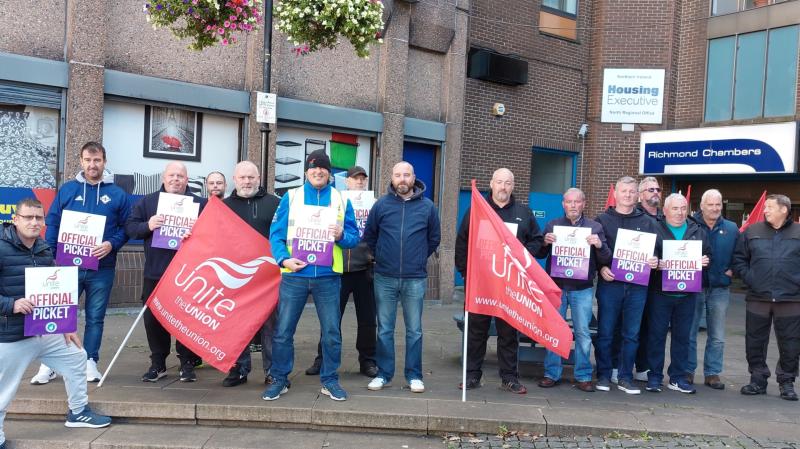 UNITE members of the Pennyburn Direct Labour Organisation Grounds' Maintenance section of the Housing Executive picketing outside Richmond Chambers in support of a pay increase.

“We are striking because we can’t afford to live.”

These are the powerful words of Barry Boyle, Unite the Union convenor for the NI Housing Executive, in support of the striking members of the Pennyburn direct labour organisation grounds’ maintenance team.

The Pennyburn workers are entering week three of a four week strike in support of an inflation-linked annual pay rise.

Barry Boyle described the grounds’ maintenance team as “the definition of the working poor".

He added: “Some of the people on the picket line outside the Richmond Chambers Housing Executive headquarters cannot even afford to drive to work.”

Speaking to Derry Now, Troy Hunter, from the Pennyburn direct labour organisation grounds’ maintenance team, said he and his colleagues were striking for “better pay and conditions”.

“We have been in negotiations with top NI Housing Executive management about better pay but we have not had a decent offer, so, effectively, they have left us no alternative but to come out here and strike today.

“We are responsible for grounds’ maintenance. We look after all of the grounds around all of the Housing Executive housing estates. We maintain the grass and hard areas, lift litter, everything.

“This strike has been a long time coming. You have men on this picket line who are having to use food banks at the minute because of the increasing cost of everything. The pay rise we were offered was nowhere near good, in fact it is like a pay cut to be honest because we were offered 1.75%, which is well below inflation,” said Troy Hunter.

Mr Hunter said he and his colleagues were concerned about the coming winter because all of the energy companies were increasing their prices in October.

He predicted: “As a result, you will find the ordinary people in the street struggling to pay their energy bills. We have been finding it hard for years.

“NI Housing Executive has frozen rents in order to help its tenants and sub-contractors were given a 30% raise, to help their profits, to help them survive.

“We have tried to negotiate with the NI Housing Executive but no decent offer was made so we had no alternative but to come out on strike.

“Standing here in the Diamond, we are getting plenty of support from passing motorists, tourists and locals. We are everyday working people,” said Mr Hunter.

Barry Boyle of Unite the Union said the NI Housing Executive did not pay workers well.
He said: “As a result of what I would call ‘abuse’ by the Westminster government, local government agencies have been worse and worse paid.

“We are currently fighting last year’s pay award of 1.75% because as soon as we were awarded the 1.75%, we were hit with an increase in National Insurance contributions of 1.25%. Basically, the grounds’ maintenance employees were handed a 0.5% pay rise and, as we all know, inflation is going through the roof, so it was effectively a pay cut.

“We are out striking because we can’t afford to live. These guys are the definition of the working poor. These guys have nothing. The Housing executive as an organisation froze all the rents for tenants because tenants could not afford to pay the rent. That was a good thing. It also gave a 30% raise to the sub-contractors. Then they tell the workers there is no money to pay them,” said Mr Boyle.

Brian Boyle said people were striking so they could afford to feed their children.

“I have never known such a dire situation in all my time as a Unite convenor.

“We are supposed to be a first world country. We are working for a semi-state body in 2022 and the best it can come up with is to publish a list of food banks so workers will know where to go. That is not acceptable.

“I can’t get the politicians to come out and say this is wrong. I am lobbying hard.

“The Housing Executive looks after 85,000 homes and by and large those homes are tenanted by the elderly, the sick and the vulnerable. These guys might be the people that elderly person or sick person would see from one end of the week to another, yet the Housing Executive will not pay them.”