The Craigbane man recalls the heartbreak of losing in 2001. 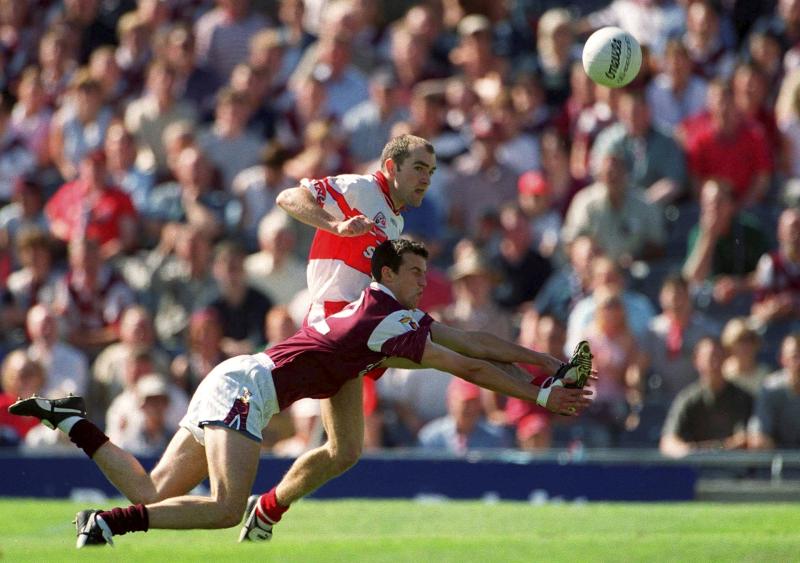 Ahead of Derry's clash with Galway Mary K Burke met up with former Derry defender Fergal Crossan who spoke candidly about family tragedy, football and his memories of Derry's last All Ireland semi-final against Galway in 2001...

Fergal Crossan was the youngest boy in a Craigbane family of eleven children.

In 1980, his elder brother Philip Declan died tragically at the age of seven after an accident on the family farm.

“That was definitely tough on the family now," he said.

“Some of the older brothers were there with him, beside him and on the trailer and my father was driving the tractor – it just happened...

"That had to be an unreal thing for my brothers to see that day, and for my Da. My father had to carry his wee body down the lane there at home you know, and that had a terrible effect on him." 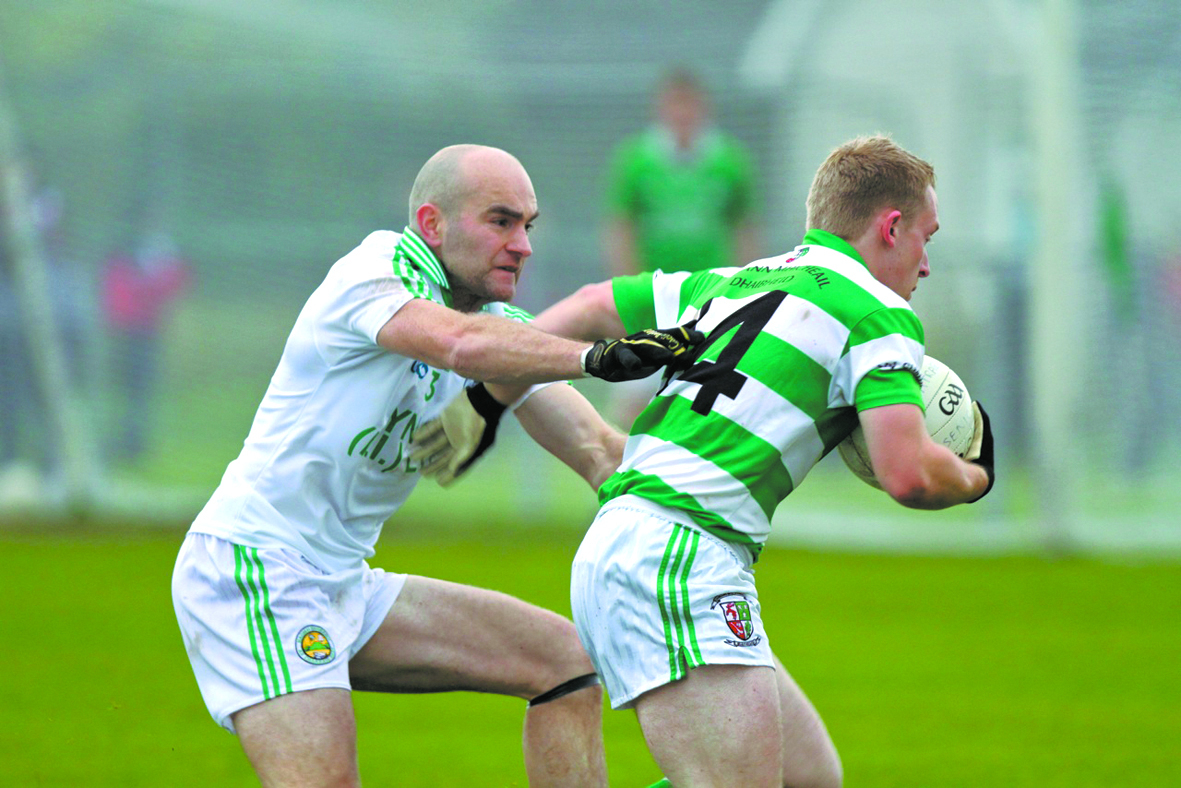 Fergal Crossan in action for club side Craigbane. Pic by Mary K Burke.

Their father Gerry was instrumental in the formation and continuation of Gaelic games in Craigbane.

Fergal's uncle Philip had been heavily involved in the club's start-up in 1959, but it lasted just three years before folding again due to emigration.

In 1972, Gerry took it on and made it his own. The contribution he made is forever embedded in the club's present and future. Their home is Gerry Crossan Park.

But the accident had a brutal effect on him.

“If my father had taken a drink before that, then that was a real blow to him."

Just three years later, he and a couple of Fergal's elder siblings had gone to Farah's Bar up the road on St Patrick's Day.

They came home for dinner but Gerry went out again, heading over the mountain towards Draperstown.

The car he was driving hit a bridge along the road.

“He was in the car on his own thankfully and no-one else was hurt, but that was a terrible blow for us all. I was seven then.

“That's a lot to carry and you have to give my mother some credit for coping with that. She is a strong woman.

"And also my sisters, Helen is the oldest and she is like a mother figure around the house still. Helen is a saint, you know.

“Our whole family would do anything for you, but they had to mature quick, you know, with those two massive events in their lives." 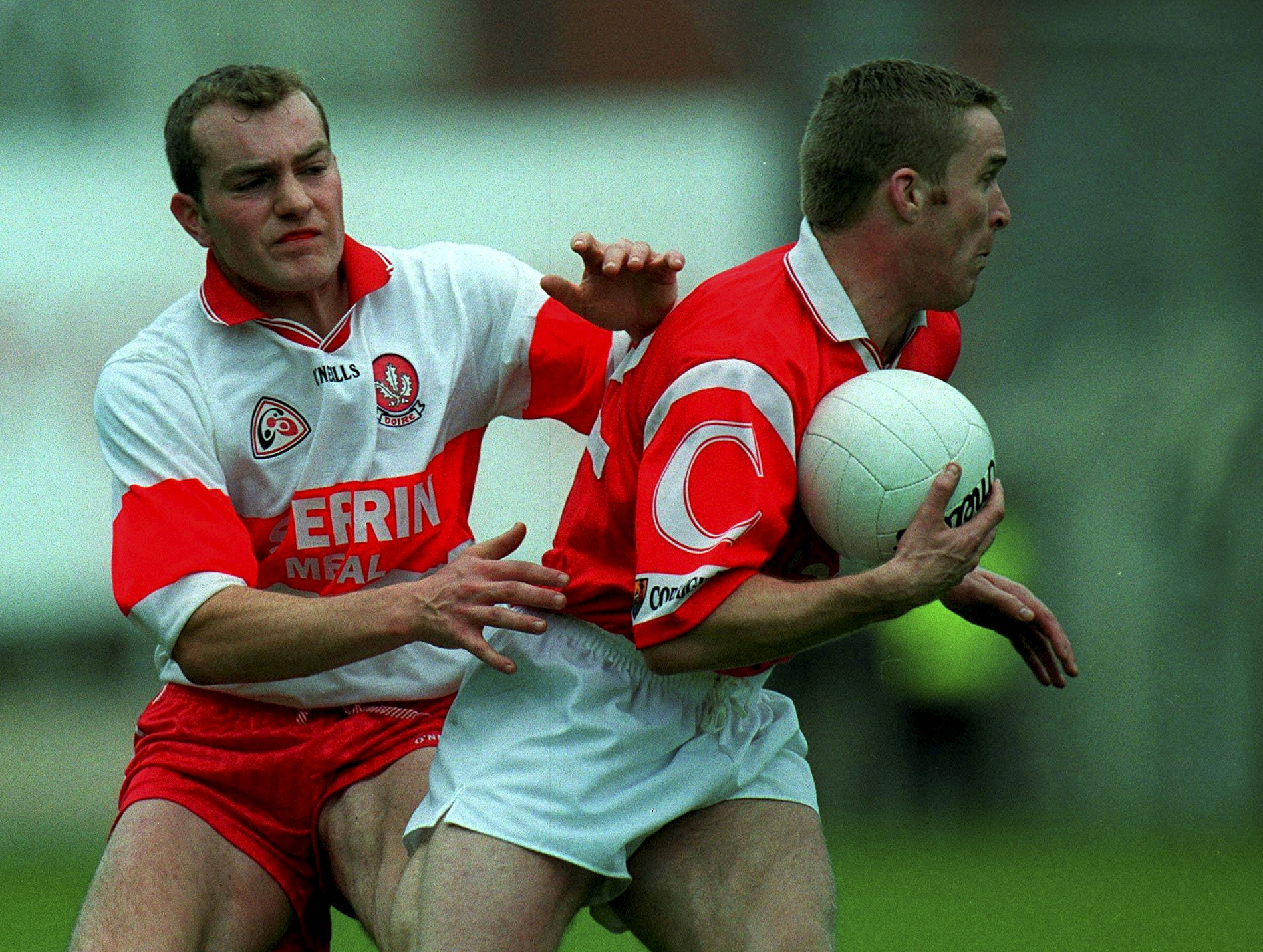 Padraig O'Mahony of Cork in action against Fergal Crossan of Derry in 1999. Photo by Ray McManus/Sportsfile.

Gerard is the farmer of the house and he still farms at home.

He was just 14 when he had to take on the reins of the farm. He got a bit of help about the house and had a level head on him to keep everything going at home.

“Mammy will be 81 this year and thank God she is in good health, and at home there so we are lucky with that.”

When Gerry Crossan started up the GAA club in Craigbane again in 1972 after a nine-year break, he was still a young man with a growing family.

"Daddy took the reins. When I look back at that, he was only 29 himself and he pushed and got the club up and going again.

"Imagine he managed the senior team, he got underage going, he got pitches anywhere he could, and there was a lot of work done.

“He was farming full time, he was North Derry County Board Chairman, going to meetings, and as well as all that he loved Scór and was while to get Craigbane involved in that as well,” said Fergal.

“It's brilliant that the pitch is called Gerry Crossan Park. It means so much to the family.

"I have two daughters Aíne and Éire and my son is five and he is called Gerry Crossan.”

Looking back at his playing career isn't an entirely happy experience for the veteran defender.

“This has been like therapy for me," he says laughing. 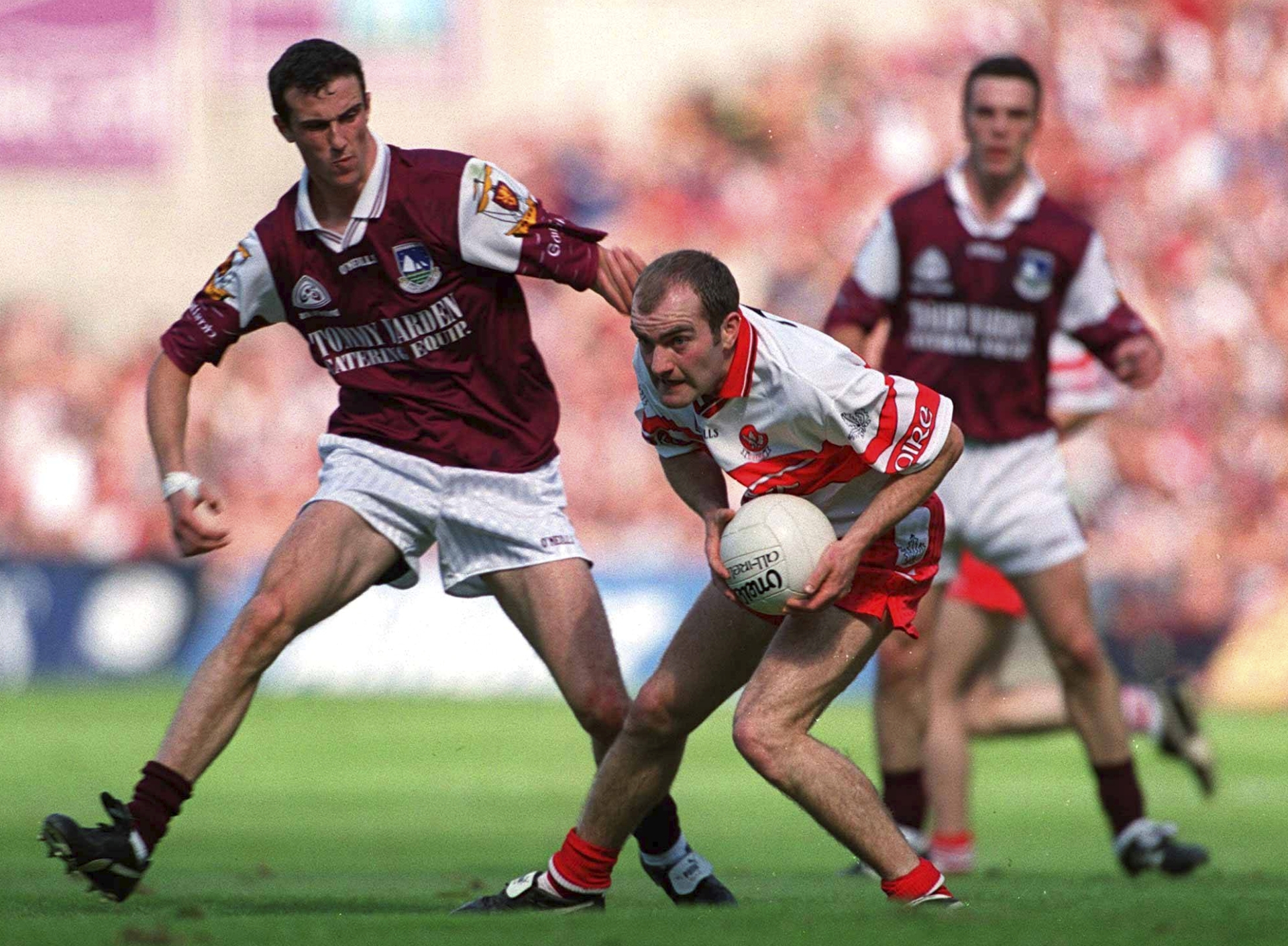 Fergal Crossan of Derry in action against Joe Bergin back in 2001. Photo by Brendan Moran/Sportsfile.

“A lot of it is just a blur and some of it you kind of blank out you know because some of the defeats were just heartbreaking.”

He was at the heart of the Derry defence in 2001 as they took off on a unique journey. The first year of the qualifiers meant defeat to Tyrone wasn't terminal. They'd come back around to defeat the Red Hands in Clones and earn an All-Ireland semi-final with Galway.

Crossan's mind is drawn back to the first game with Tyrone.

“A painful memory, literally. Pascal Canavan caught me with a nasty left hook off the ball right into the face, a straight punch.

"I remember my eyes were watering so badly and I couldn't see a thing.

“Eamonn Coleman saw it and he went completely crazy along the line. He had seen it happen and he was raging.”

Speaking to the assembled press after the game Coleman didn't mince his words.

“I don't know what referees and umpires are up to when they can see some things and not others. I've Fergal Crossan sitting in there with a cut face and a black eye. I believe if you strike someone you should be sent off, simple as that."

“I didn't know he had said that - fair play to him,” said Crossan.

“Eamonn always had your back and I remember that day he was furious. 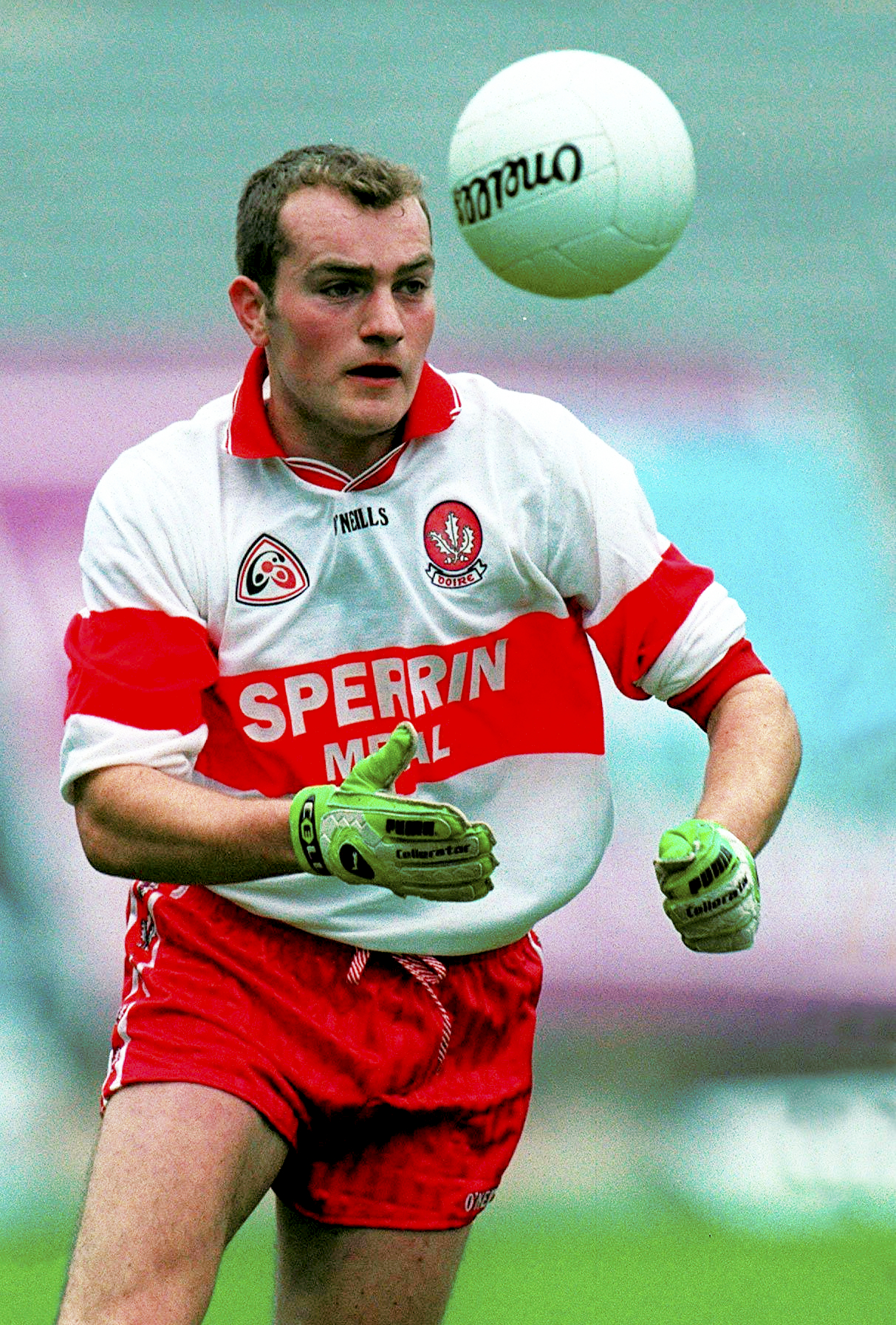 "He ran straight in to the umpires when it happened, and he was well worked up over it, he definitely had my back like.

"Eamonn, God rest him, was a man for backing his players.”

Derry were forced to take the new qualifier route, dispatching Antrim, Laois and Cavan before drawing Tyrone again in the All Ireland quarter final, where they exacted their revenge before meeting Galway in the now infamous All Ireland semi-final.

Crossan's season came to a disappointing end personally, he was taken off before half-time.

“I was disappointed that I'd been taken off just before half time surely.

"You know personally I was gutted at the time, and then I look at Eamonn Coleman's track record and I just have to say that he had to make the call.

“He was a real Mr Motivator. He knew how to get players going, and all the boys just loved him. And so you don't hold grudges with a man like that.

"As a player you have to take those things and move on.

"I was back in with Derry the next year anyway, it was done and everyone moved on.

“I just remember after the game feeling more for the boys around me than I did for myself. 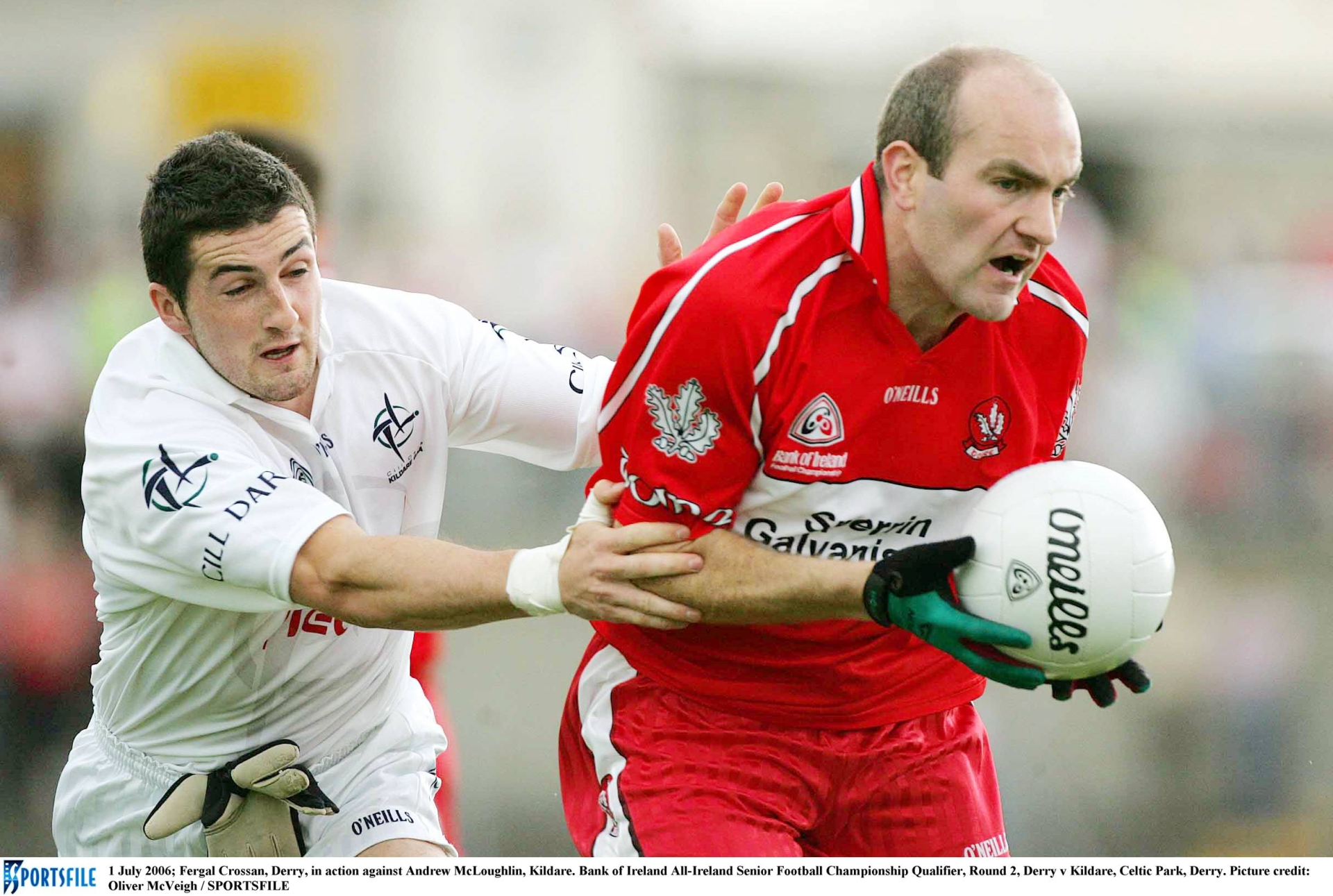 "It's a funny one but you just look around you and feel for men like Anthony Tohill, wondering was that his last run out at Croker, but I never even thought about it for myself because you're young and you think I've plenty more years yet.

“But those older players, the ones you look up to, then you think God, that's not how you want it to end for them.

"Even looking back to my minor career, boys like Johnny McBride. He was captain of our minors and he was a serious leader.

"God I looked up to him, he just controlled the dressing room and he was unbelievable. What a warrior he was.

“I saw that type of presence again in Henry Downey when I came into the Derry set up in 1998 – men like that were unreal in the dressing room.

"At club level too then, I was lucky to have played with a leader like Gavin Conwell – he was our inspiration as far as the club was concerned.

"I'll tell you when you are in the changing rooms with Gavin Conwell you'd be inspired.”

The Crossans have inspired the very soul of the GAA in Craigbane for as long as it's existed.

None more than Gerry.