The Limavady hills pulsed with the sound of music and happiness over the weekend. 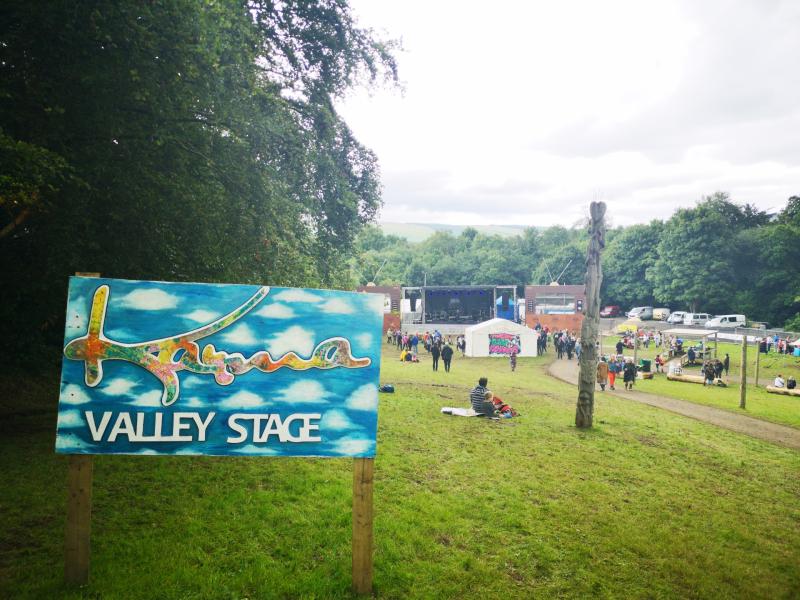 The Karma Valley Stage at the 2022 Stendhal Festival.

A sea of tents, camper vans and cars sit juxtaposed on the hills between Limavady and Drumsurn. Over the hill you can just make out the slow spin of a Ferris wheel.

Inquisitive cows poke their heads over fences as vehicles wind past, navigating the tight corners of Ballymully Cottage Farm to the designated car park among those hills.

Line after line of parked cars span the hillside like the starting grid at Silverstone, as families, couples and groups of friends open the boot to unload the necessary cargo.

Fully flexed and ready to rock after two Covid-hit years of logistical gymnastics, the festival is back, unabridged and unencumbered.

Inside, a purple circus tent draws the eye next to the sparkling fun fair. The Stevie Martin Stage is already bouncing as Trú's set bursts into life. 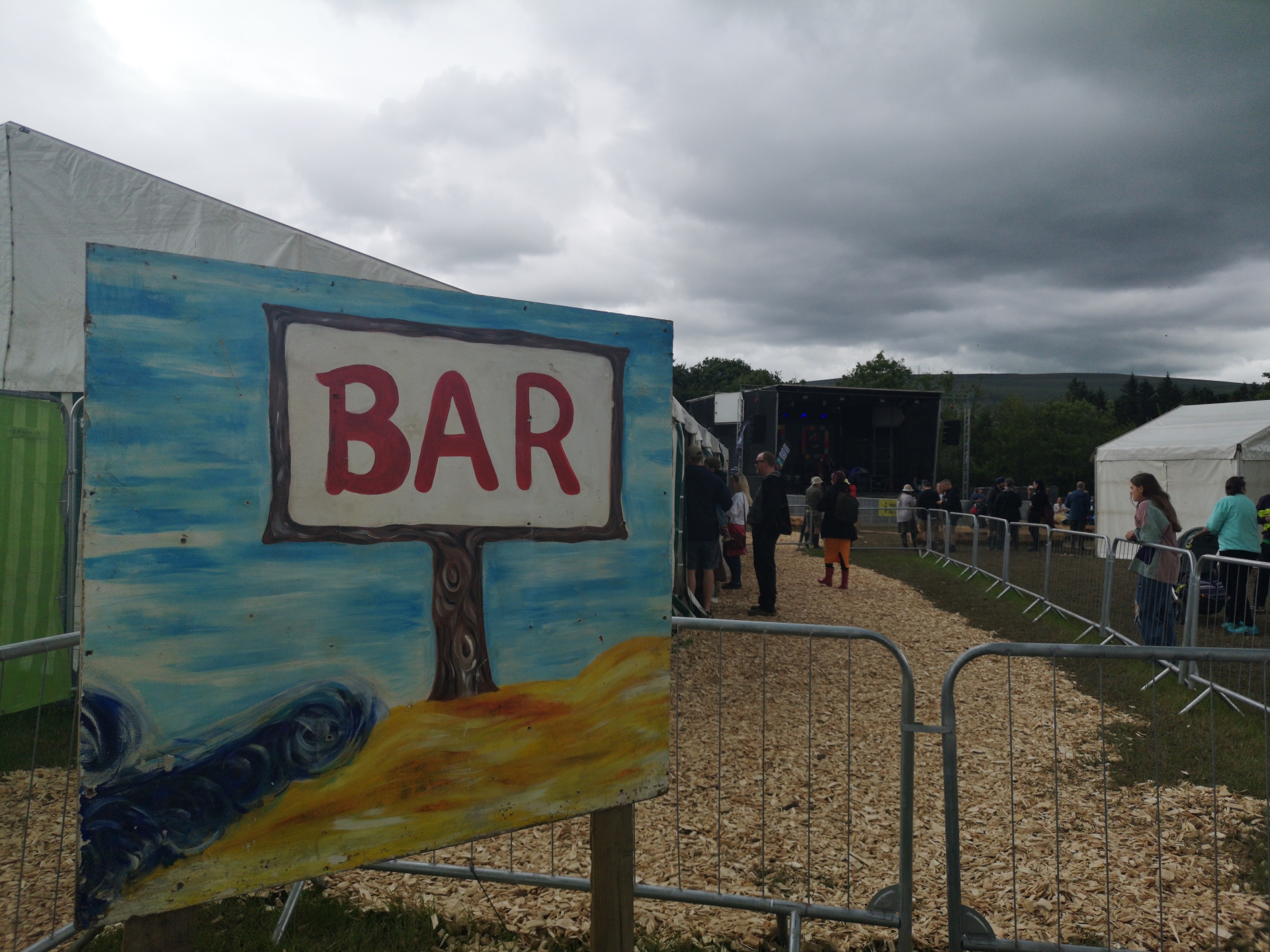 To its left, a tropical-looking sign with 'Bar' on it stands out against the threatening grey clouds that swirl overhead.

Through the trees, the NI Opera holds court on the Karma Valley Stage, their light piano tones perfect for the tender heads of those on their third day at the festival.

Their rendition of 'Somewhere Over the Rainbow' is almost a dare to the dull sky above the chairs and picnic blankets dotted up and down the sweeping hill in front of the stage.

Around the site, stripped logs are placed as seats around the grass, matted by three days of excited, happy footfall.

Coming down the pathway on the hill is a tall man with long hair and a beard, sporting a round pair of sunglasses, a trilby hat and an orange hi-vis jacket.

He is walking hand-in-hand with two blonde women, each balancing a crown of flowers on their heads and dressed in brilliant technicolour.

They settle for a spot close to the perimeter fence next to the stage and are gradually joined by the rest of their group.

“This is the third time for me; there's my da over there with his hands in the sky, so it's going well,” says the man, whose name is Cormac.

“We've been here since Thursday, ready to go. I got out of work as quickly as I could and the craic has been good.

“I had a wee go on the carousel ride there, and that kept me going.” 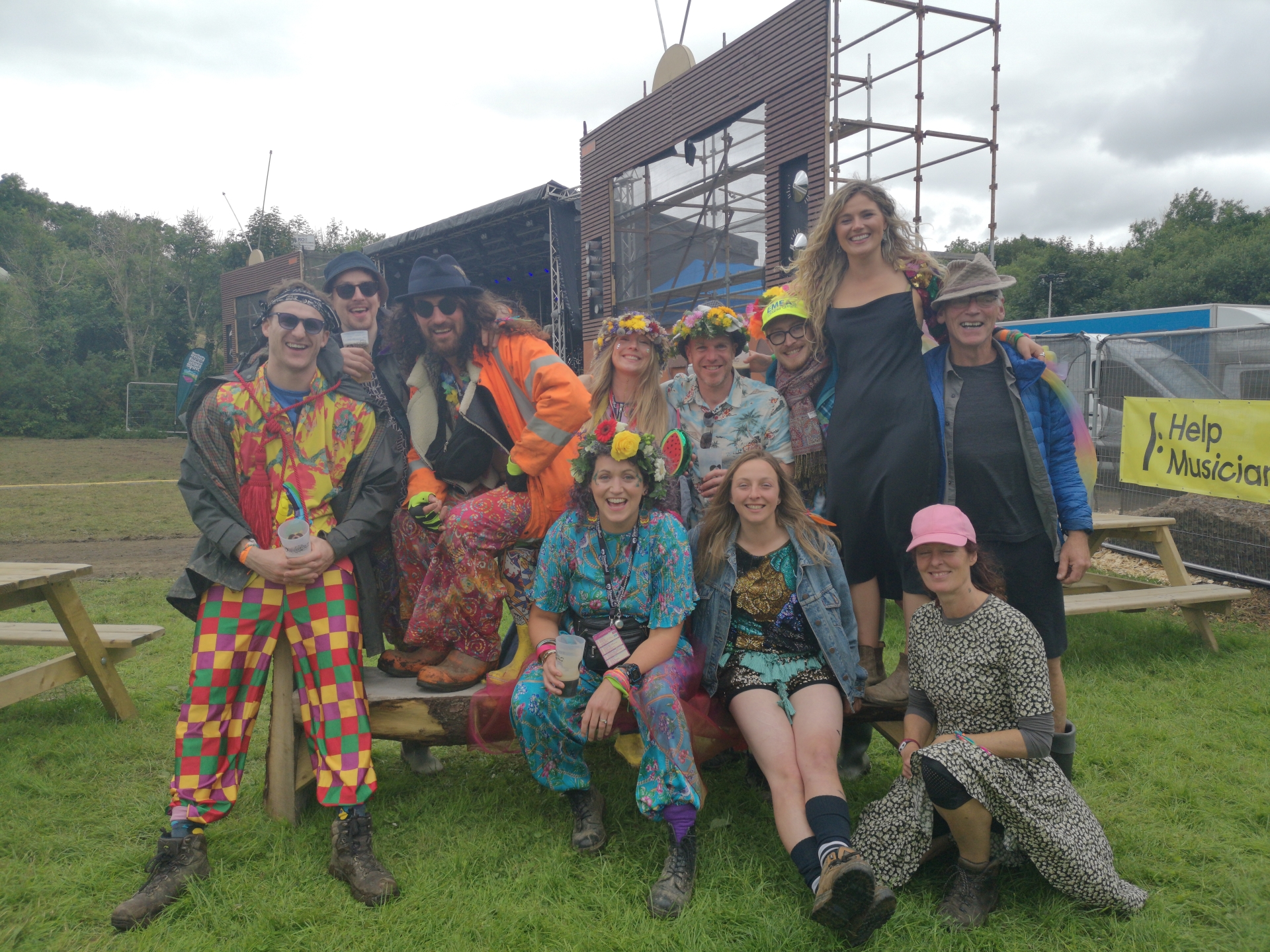 They wish it could be Stendhal every day. A group of festival goers living their best lives.

“The spinning really helped actually, and a wee gravy chip will sort out anything,” adds Ana, perched beside Cormac against the metal fence.

The group say they had no one in particular in mind when booking to see the festival, but mention Sister Sledge as one to look out for.

“They play all the disco hits,” says Lena, originally from Switzerland and coming to the festival via Killyman, County Tyrone.

Cormac leans back, grinning. A man in his element.

“This is my perfect type of normality here. I wish this was every day, lying up in a field somewhere,” he said.

His friend Thomas tells him the word 'normality' hasn't been in his vocabulary since he was born, and with that I leave them to enjoy their day.

About half an hour later, the group are spread out in front of the stage throwing a tennis ball around and cheering every catch. Living their best lives. 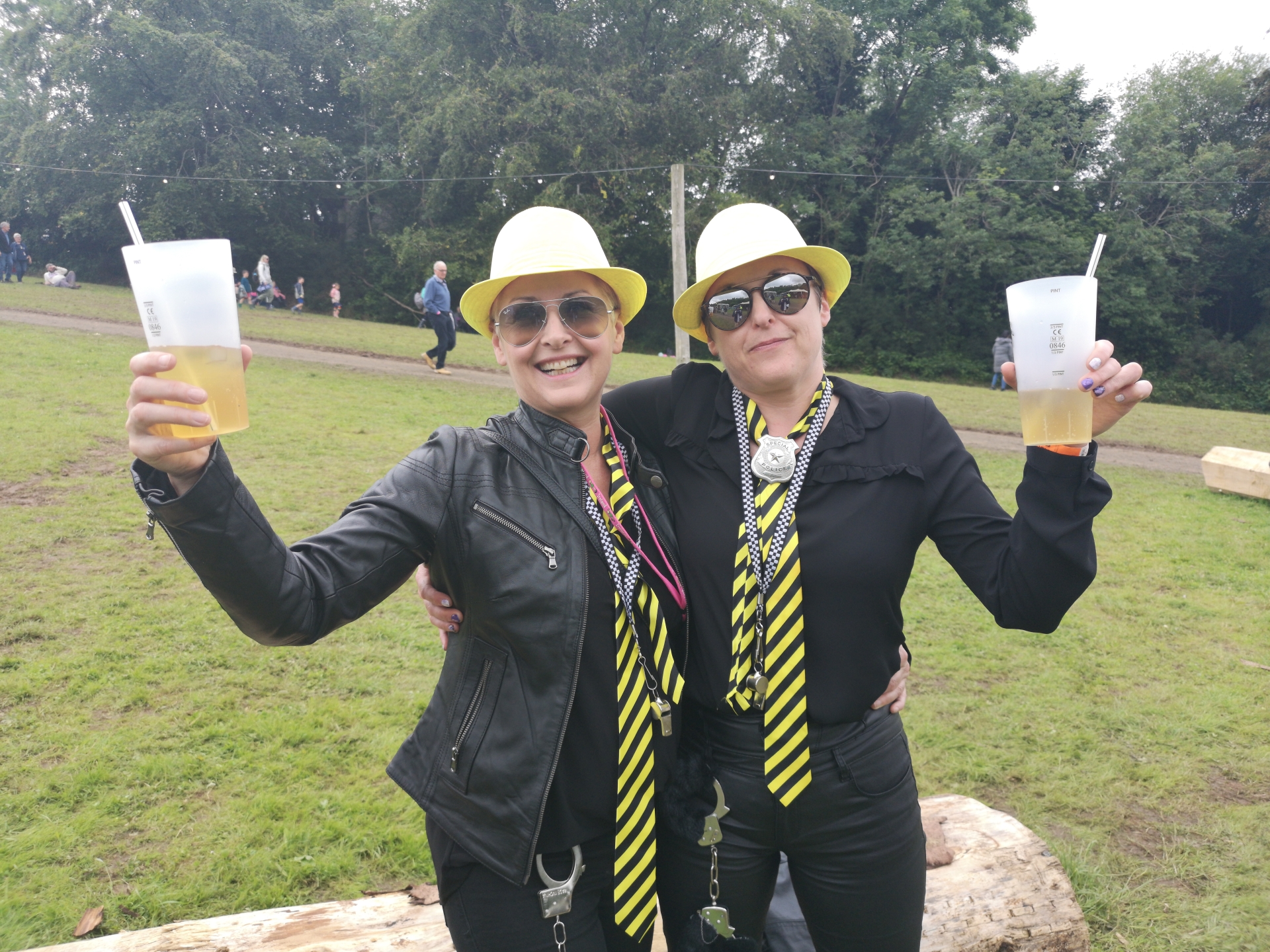 Terri and Mary from Derry enjoying the early stages of Saturday's line up at Stendhal Festival.

Veteran socialist Eamonn McCann makes his way through the crowd, stopping for occasional photographs with admirers as the sun begins to break through its clouded blockade.

Parents are negotiating the growing crowd with mini-trailers in tow, carrying children and all their accompaniments.

A topless man in his 50s is bopping along to the on-stage Innishowen Gospel Choir. Entertainers in stilts parade up and down the path to wide-eyed stares from awed children.

Two young girls hold a cartwheeling contest at the foot of the hill's natural amphitheatre. My one-year-old is keeping in with the earthy spirit of the day by attempting to eat the grass.

Families are meandering through the forest, later to be the setting for an Over 18s rave. Perched on one of the log seats near the stage, Terri and Mary from Derry tell me it's not to be missed.

Both are dressed in black shirts and jeans, with yellow trilby hats, matching yellow and black striped ties and round shades.

Whistles are draped around their necks and a set of handcuffs are ominously attached to each of their waists, with Mary wearing a sheriff's badge.

“We're here for Sister Sledge and the rave in the woods. Even last year, that was the highlight of our weekend – we like to dance,” says Terri.

In keeping with the laid-back, friendly atmosphere, the pair are in deep conversation with three people they have just met on the same log. 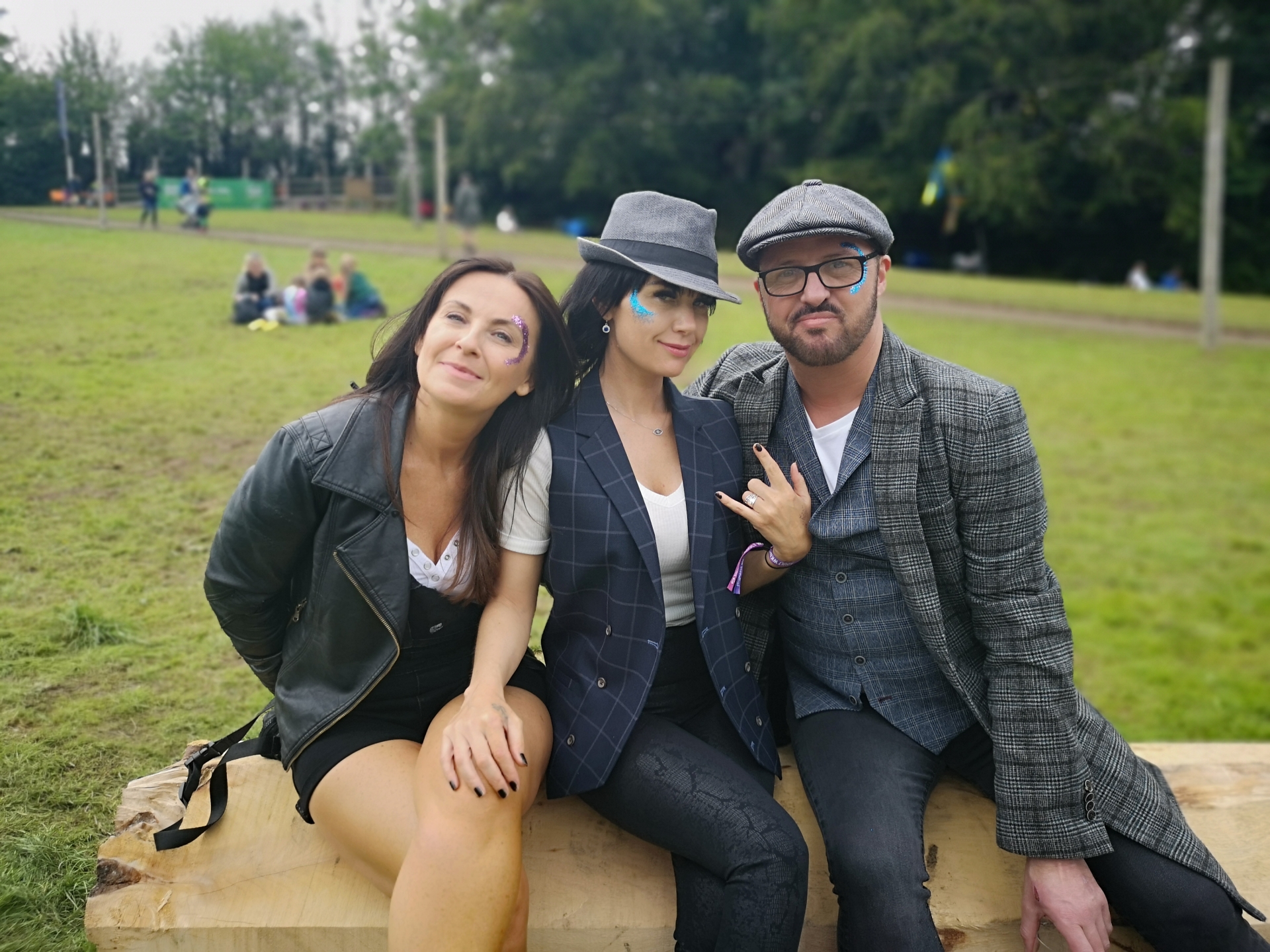 Mary, Carly and Hugh enjoying the festival's chilled out vibes on Saturday afternoon.

Sharply dressed, and with a curved line of face paint around their eyes, are Hugh from Coleraine, Carly from Castlerock and Mary from Ballymoney.

This is not Hugh's first Stendhal rodeo.

“I was here five, six years ago, my first festival, and then me and my mate Carly were here yesterday, he said.

“I was quite drunk the first time I was here, so I don't remember a lot about it, but I think it's busier in terms of there being more of it.

“In the evening it changes again; the kids go, people loosen up a bit and there's a lot more dancing and bigger crowds.”

Having not attended the festival before, Mary's first impressions are good.

“I love it, absolutely love it. It's really chilled out; easy come-easy go. I've not done fesitvals really, but this would give me the taste to go to more,” she said.

“It's very family-friendly, very chilled – it has a very nice vibe. It's the perfect atmosphere to bring your family and kids to at this time of the day.”

As if on cue, the hiss from a tin of hair spray draws everyone's attention, as a group of chilren recolour their hair for the day. 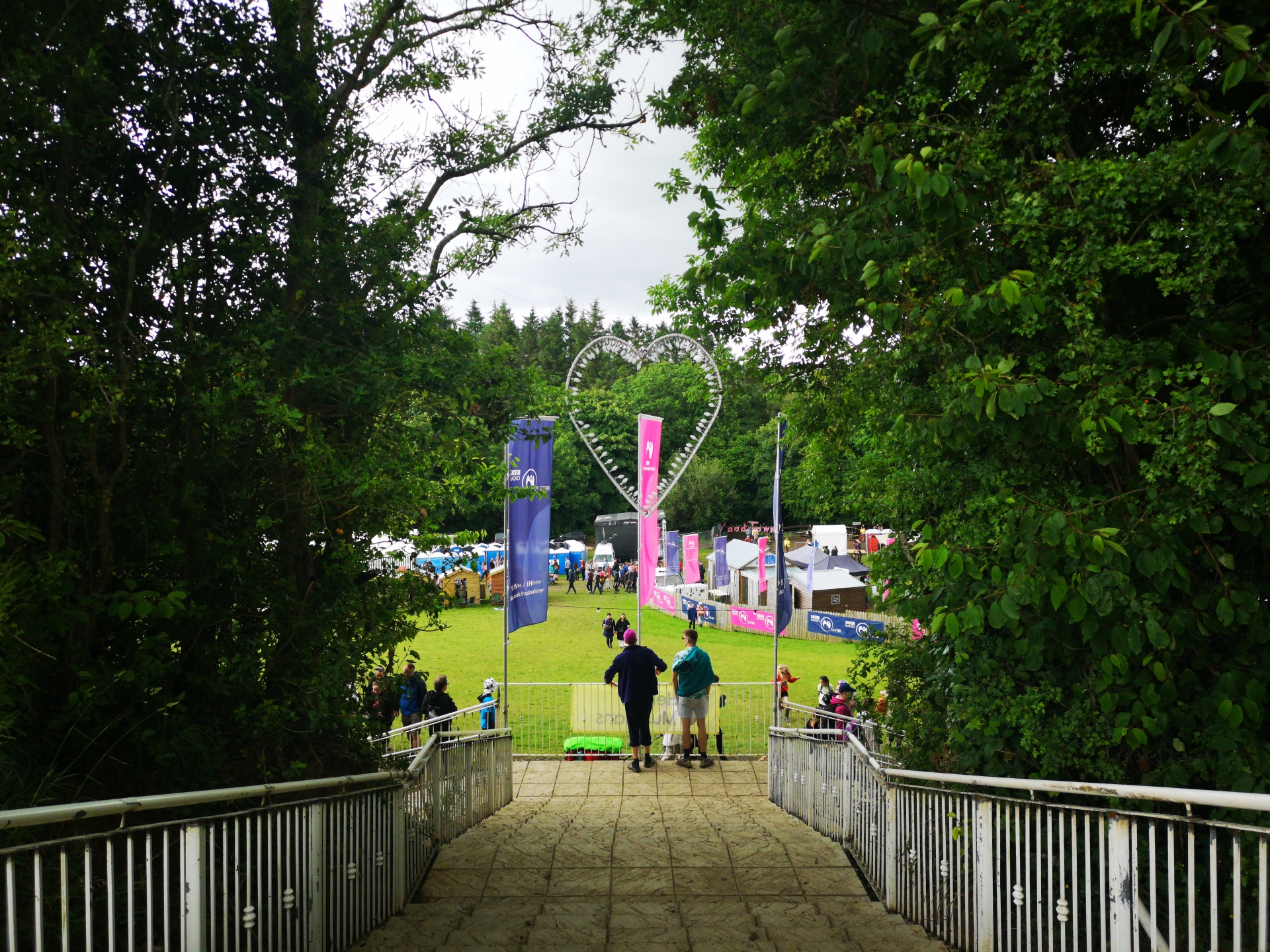 Follow your heart. The steps leading down to the Karma Valley Stage.

Another clambers up and down the bungee ropes holding the tented cover of the food court area in place as a ten-year-old in an acid house smiley bucket hat wanders past.

Day turns to evening. A samba band parade down the hill, leading crowds towards the stage. Chants of 'one more tune' at the end of their set are duly awarded.

Bubbles float through their air, catching the light of the sun as it glimpses through the clouds. Derry half zips and jerseys are worn proudly in the crowd.

The arrival of Sister Sledge on stage prompts a mass migration down the hill. Glasses are raised in the air as people lose themselves in the music.

With Glastonbury and Belsonic playing out last week, and now Stendhal this week, festival season is in full swing, with an already romantic notion enhanced by an absence that made hearts grow fonder.

The view from the top of the hill as we make our retreat is one of joy. Happy, dancing people embracing the music as the sun sets over Binevenagh.

One last glance to the forest, as we make a mental note to put the woodland rave on the bucket list for next year.