Who was Kathleen Thompson?

Why does her death matter? 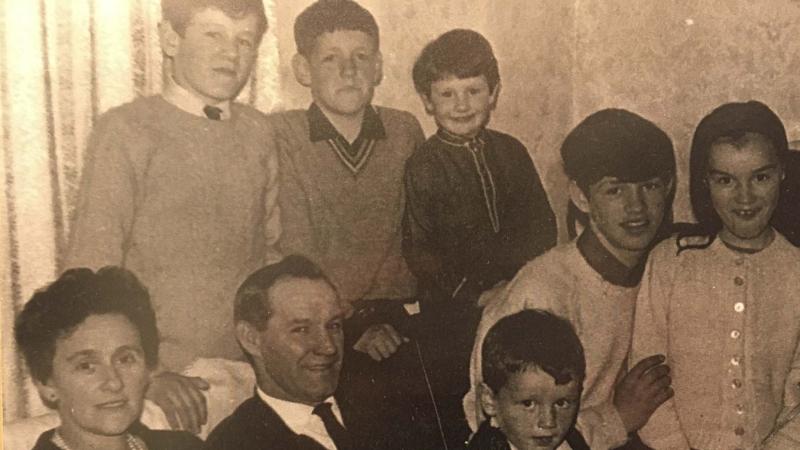 Kathleen Thompson with her family.

The Inquest into the death of Derry's Kathleen Thompson ruled this week that Soldier D was unjustified in firing the shots which killed the mother-of-six, in Derry.

Kathleen's daughter, Minty Thompson, said her mother had been “vindicated” by the findings of the second inquest into her death. She was speaking in the wake of Wednesday's publication of Judge Sandra Crawford's findings into the shooting of her mother, at their home in Rathlin Gardens, in Creggan, on November 6, 1971.

Mrs Thompson was killed by a bullet to the chest, fired by Soldier D, who fired two bullets into her garden.

Five years ago, Sara asked: 'Who was Kathleen Thompson and why does her death matter?' 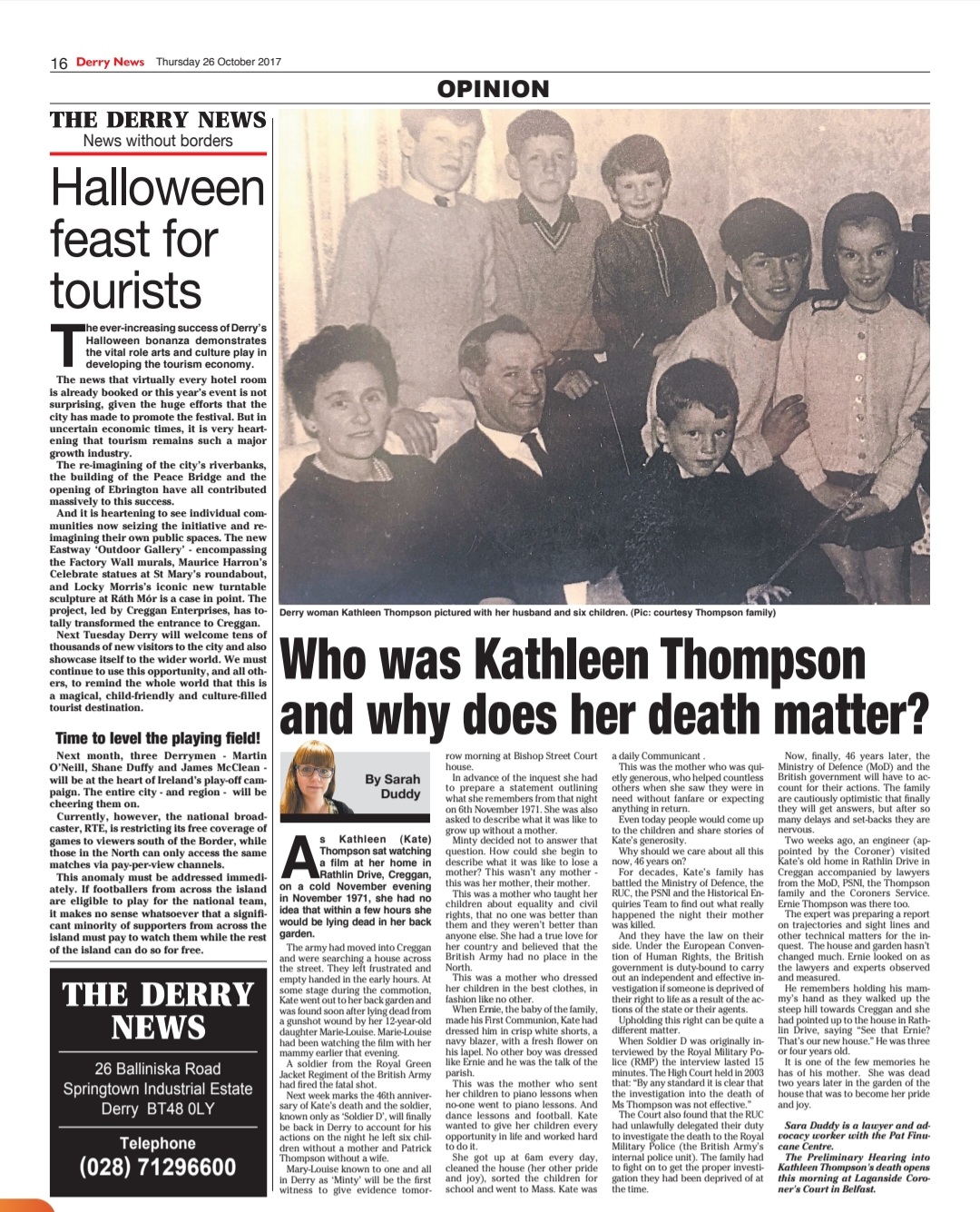 Who was Kathleen Thompson and why does her death matter?

"As Kathleen (Kate) Thompson sat watching a film at her home in Rathlin Drive, Creggan, on a cold November evening in November 1971, she had no idea that within a few hours she would be lying dead in her back garden.

"The army had moved into Creggan and were searching a house across the street. They left frustrated and empty handed in the early hours. At some stage during the commotion, Kate went out to her back garden and was found soon after lying dead from a gunshot wound by her 12-year-old daughter Marie-Louise. Marie-Louise had been watching the film with her mammy earlier that evening.

"A soldier from the Royal Green Jacket Regiment of the British Army had fired the fatal shot.

"Next week marks the 46th anniversary of Kate’s death and the soldier, known only as ‘Soldier D’, will finally be back in Derry to account for his actions on the night he left six children without a mother and Patrick Thompson without a wife.

"Mary-Louise known to one and all in Derry as 'Minty' will be the first witness to give evidence tomorrow morning at Bishop Street Court house.

"In advance of the inquest she had to prepare a statement outlining what she remembers from that night on 6th November 1971. She was also asked to describe what it was like to grow up without a mother.

"Minty decided not to answer that question. How could she begin to describe what it was like to lose a mother? This wasn’t any mother - this was her mother, their mother.

"This was a mother who taught her children about equality and civil rights, that no one was better than them and they weren’t better than anyone else. She had a true love for her country and believed that the British Army had no place in the North.

"This was a mother who dressed her children in the best clothes, in fashion like no other.

"When Ernie, the baby of the family, made his First Communion, Kate had dressed him in crisp white shorts, a navy blazer, with a fresh flower on his lapel. No other boy was dressed like Ernie and he was the talk of the parish.

"She got up at 6am every day, cleaned the house (her other pride and joy), sorted the children for school and went to Mass. Kate was a daily Communicant .

"This was the mother who was quietly generous, who helped countless others when she saw they were in need without fanfare or expecting anything in return.

"Even today people would come up to the children and share stories of Kate’s generosity.

"Why should we care about all this now, 46 years on?

"For decades, Kate’s family has battled the Ministry of Defence, the RUC, the PSNI and the Historical Enquiries Team to find out what really happened the night their mother was killed.

"And they have the law on their side. Under the European Convention of Human Rights, the British government is duty-bound to carry out an independent and effective investigation if someone is deprived of their right to life as a result of the actions of the state or their agents.

"Upholding this right can be quite a different matter.

"When Soldier D was originally interviewed by the Royal Military Police (RMP) the interview lasted 15 minutes. The High Court held in 2003 that: “By any standard it is clear that the investigation into the death of Ms Thompson was not effective.”

"The Court also found that the RUC had unlawfully delegated their duty to investigate the death to the Royal Military Police (the British Army’s internal police unit). The family had to fight on to get the proper investigation they had been deprived of at the time.

"Now, finally, 46 years later, the Ministry of Defence (MoD) and the British government will have to account for their actions. The family are cautiously optimistic that finally they will get answers, but after so many delays and set-backs they are nervous.

My mother was a 'totally innocent woman' - Minty Thompson

"Two weeks ago, an engineer (appointed by the Coroner) visited Kate’s old home in Rathlin Drive in Creggan accompanied by lawyers from the MoD, PSNI, the Thompson family and the Coroners Service. Ernie Thompson was there too.

"The expert was preparing a report on trajectories and sight lines and other technical matters for the inquest.

"The house and garden hasn’t changed much. Ernie looked on as the lawyers and experts observed and measured.

"He remembers holding his mammy’s hand as they walked up the steep hill towards Creggan and she had pointed up to the house in Rathlin Drive, saying “See that Ernie?  That’s our new house.” He was three or four years old.

"It is one of the few memories he has of his mother.  She was dead two years later in the garden of the house that was to become her pride and joy."