Rev John Kirkpatrick has been awarded an honourary doctorate. 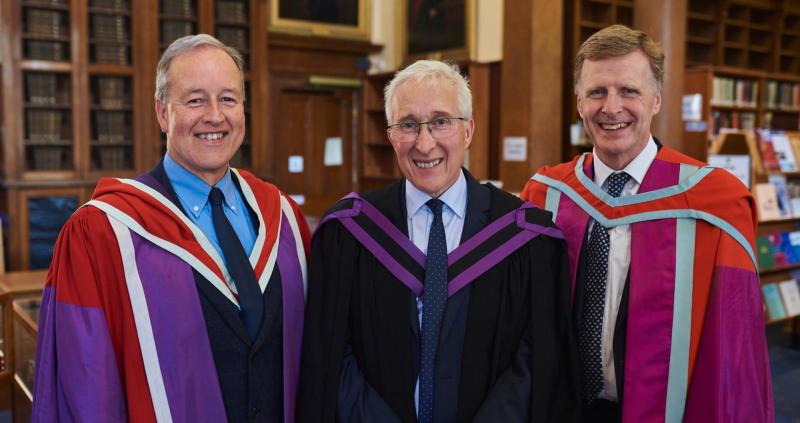 Dr Kirkpatrick, who is minister of Portrush Presbyterian Church, was honoured in recognition of his nomination as PCI’s incoming Moderator ahead of next week’s General Assembly when he takes office.

In a sign of the gradual return to the familiar routine of previous years, Dr Kirkpatrick joined family and friends of those who had studied at Union Theological College in Belfast for the annual graduation ceremony, where they received their degrees from the PTFI, together with certificates of competency for ministry.

The PTFI awards degrees by the authority of its Royal Charter, which was granted by Queen Victoria in 1881 and renewed by the Queen in 2021.

The award to the Moderator-Designate is made in recognition of their nomination to the General Assembly as Moderator.

This year’s citation was delivered by Dr Desi Alexander, Senior Lecturer in Biblical Studies at UTC, who spoke of how his and Dr Kirkpatrick’s paths first crossed.

They met at Greenmount Agricultural College were where the future Moderator was on a placement studying farm management. “I recall you riding a motor bike and wondering how you managed to wear a helmet because in those days you had considerably more hair than you have today,” Dr Alexander said.

He spoke of Dr Kirkpatrick’s life growing up, how he had encountered God aged nine and how his time at Greenmount, when aged 19, his life “was turned around as you discovered afresh God’s love and grace in a most personal way.”

Having left the agri college in 1979 and completed a degree in Social Science and Environmental studies, Dr Alexander described how the Moderator-Designate felt God’s call on his life to full-time ministry which led him, aged 25, to Union Theological College in 1981 and his ordination as Assistant Minister Megain Memorial and Mersey Street Presbyterian Churches in east Belfast four years later.

He also spoke of his first call as a minister to Garryduff Presbyterian Church outside Ballymoney in 1987 and his move to Portrush Presbyterian six years later where he has served for nearly 30 years.

“As someone who has marinated himself in Scripture, you have a burning passion that others should be steeped in the life-transforming Word of God. Your ministry has been marked by biblical teaching that seeks through the Holy Spirit to be life changing,” Dr Alexander said.

“All who listen to you quickly sense that you have a passion for biblical preaching that addresses the needs of contemporary people. Pastoring in Portrush is but one part of your ministry. Your vision for the kingdom has extended far beyond the strands that stretch out to the east and west of Portrush.”

Dr Alexander spoke of Dr Kirkpatrick’s role in developing links between PCI and reformed churches in central and eastern Europe after the Iron Curtain fell.

His chairing of the European area for the World Alliance of Reformed Churches from 1995 to 2002 and his leadership of the New Horizon Christian festival for seven years, encouraging Christians to grow in their faith.

There was also Dr Kirkpatrick’s well-known interest in motorbikes. “Most young men grow out of this, but you have remained young at heart. However…it is not the machines that primarily interest you, but the people,” Dr Alexander said.

“Since 1994, you have been Race Chaplain to the Motor Cycle Union of Ireland. Motor biking and Christianity don’t always go together in the minds of most people. Yet you have sought to build a bridge to many who might not see themselves as regular church members.”

In conclusion Dr Alexander spoke of the new Moderator’s love for his children and grandchildren – and his wife Joan, “In giving thanks to God for the opportunities that have come your way, John, I know that you would want to highlight the vital role that Joan has played in shaping and sustaining your ministry.

"This honour tonight is one that you will share with Joan, your whole family and many others. All of us tonight are thankful that from an early age, John, your life was and continues to be transformed by the unmerited, dynamic grace of God.”