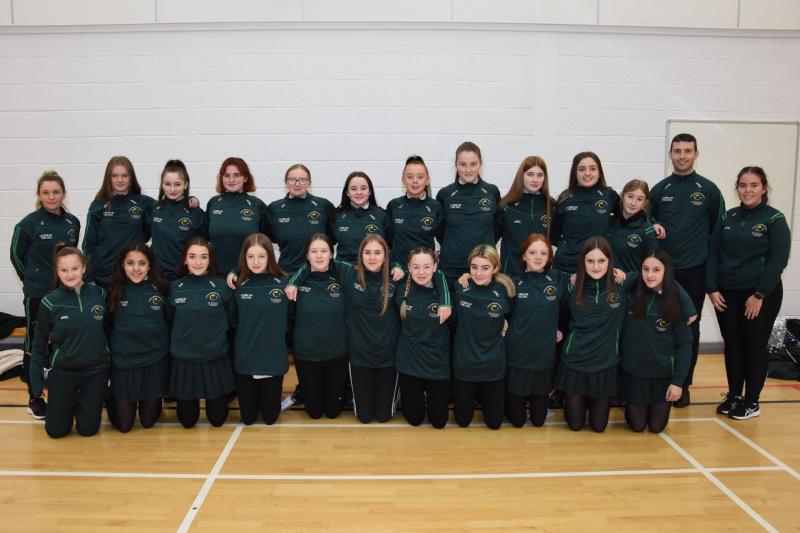 St. Cecilia’s U16s will attempt to create history by winning this year’s Erne Cup for the first time, just over two years since playing their first game together as a team.

This coming Thursday the girls will meet Rosses Community College in their first ever Ulster final, and excitement is high after a thrilling road to the final which has highlighted the determination and belief in the team.

Coached by Brian O’Donnell (Glenullin) and Ciara McGurk (Steelstown/ Sean Dolans’), the girls just don’t do boring games in this competition, having come from behind against Lismore Comprehensive and Mag Ene, Bundoran to make it to their first final.

That quarter-final game against Lismore was particularly memorable as the girls scored four goals in the last five minutes of the game to win by a point – an incredible comeback at any age or level. It has been a thrilling journey for everyone involved.

“We only started gaelic in the school a year before Covid, in 2019,” Head of P.E Gemma Thompson explained. “Brian O’Donnell was the brains behind it. He came to the principal because he knew Sean Dolan’s were trying to build up the girls’ game.

“The quarter-final was such an exciting match. We really wanted to beat Lismore because back in 2019 we played them in the semi-final and they beat us by a point so going into the match the girls were really up for it.

“The same thing happened in the semi-final. We were getting beat, but we started to bring it around. We were leading by 8 points and got a player sinbinned for 10 minutes and they started coming back at us. Myself and Brian O’Donnell didn’t know what the score was when the final whistle went. We ended up winning by just a point. Any match that we played had literally been nail-biting.”

As fate would have it, St. Cecilia’s now face the only team to get the better of them in the group stages in Rosses Community College. But hopes are high that with a longer game scheduled, the girls can come out on top on this occasion.

“It’s a very young team,” Gemma continued. “The majority of these girls are only 16 next year. They have really come on. The majority of girls are playing for clubs around the city; Pearses, Doire Colmcille, Steelstown and Sean Dolan’s.

“They have kept us on our nerves but the games have been very exciting. They are really up for it. They took four days off over Christmas, but we have trained right across, every Sunday, Tuesday and Thursday so their commitment has been brilliant. There has been a great buzz about the school and the community too. They are going to have a tough match ahead of them, but when they beat us it was only a 10-minute match and our girls held their own against them, so it’s definitely going to be exciting.”