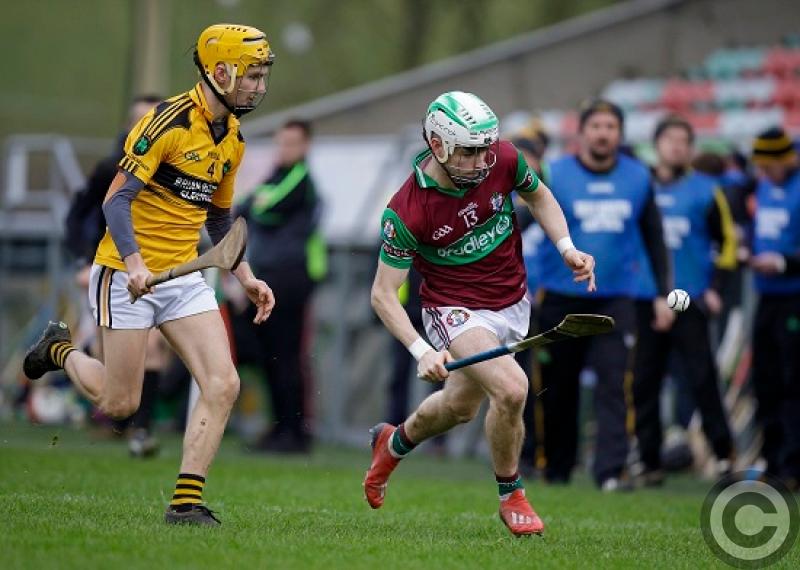 Dara Mooney on the ball for Coleraine. (Pic: Fintan McTiernan)

A three-goal blitz in the first-half from Conahy Shamrocks proved enough to see off the challenge of 13-man Eoghan Rua as the Kilkenny champions booked their place in the All-Ireland JHC Final.

The Shamrocks rippled the Coleraine net within 25 seconds of the throw-in. Veteran Kieran Mooney collected Tom Phelan’s hand pass and fired home only the second goal the Derry champions had conceded in their current championship campaign.

Sean Leo McGoldrick led the Eoghan Rua revival with three points but they were rocked again on 15 minutes when James Bergin caught another Phelan pass and hammered past Kevin McCarry and when Bergin netted again on 21 minutes, the situation looked ominous.

Coleraine responded well but their early second-half momentum was brought to an abrupt end on 41 minutes when half-forward Niall Holly was dismissed and the Derry side suffered a further blow seven minutes later when captain Ciaran Lagan received his second yellow card.

A late Ruairí Mooney goal glossed the scoreline a little but Eoghan Rua were second best throughout the afternoon.