Get yourself into a Derry Girls state of mind! 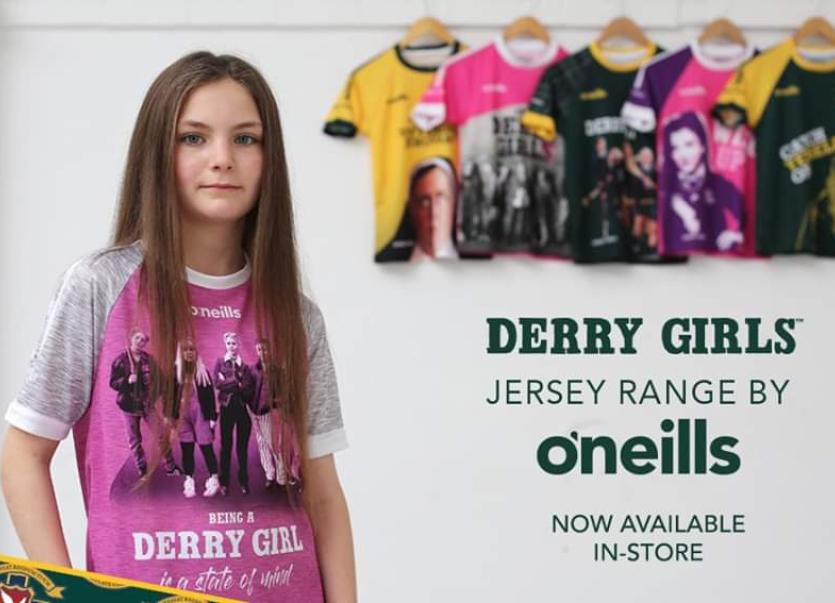 Being a Derry Girl is a state of mind and now fans of the television show can say it loud and proud with the ultimate statement T-shirt from Ireland’s leading sportswear manufacturer.

The company has been inundated with orders for its signature jerseys featuring catchphrases from the Channel 4 series. The jerseys sporting well-known Derry Girls’ punch lines such as ‘Catch yerself on’ and ‘Wise Up’ are being worn by fans across the globe. There is even a Derry Hurls jersey.

Kieran Kennedy, Managing Director of O’Neills Irish International Sports Company Ltd, revealed that Derry Girls is one of their top-selling products since being launched in August.

Just four months after the runaway success of the collection, O’Neills have now released the new addition featuring that memorable quip, ‘Being a Derry Girl is a state of mind’.

The O’Neills jerseys are made by real-life Derry girls in the city’s last surviving shirt factory. O’Neills saved it from closure earlier this year, hiring 20 long-serving machinists based at the former Victorian railway building on the banks of the River Foyle in the Waterside area.

Fans just can’t get enough of the GAA-style jerseys emblazoned with wisecracks from the TV series and O’Neills has responded with one of the most iconic lines scripted at the end of the second series when ‘the wee English fella’ tells his cousin Michelle he’s returning to London having never fitted in with the rest of the gang in Derry.

The new Derry Girls’ top featuring a pink and marl grey colour way, is likely to prove just as popular with fans and it’s available in both adult and kids’ sizes. The show has gone global since it aired on Netflix, attracting a legion of followers with its witty one-liners and humorous take on life for a group of teenage pals growing up in Derry during the 1990s.

Kieran Kennedy said that after the phenomenal response from customers visiting the seven O’Neills retail stores across Northern Ireland and its website, the company expects another surge in sales in the lead-up to Christmas. “The level of demand has been remarkable to date. We’re delighted that Derry Girls’ fans at home and abroad have also taken the O’Neills jerseys to their hearts, especially when they are made in Derry, sustaining local employment and keeping the city’s centuries old stitching tradition alive and well.”

O’Neills will be holding a special event for the new ‘state of mind’ jersey at their Derry superstore in Waterloo Place on Sunday, 24th November, to coincide with the annual switching-on of the Christmas lights which attracts thousands of visitors into the heart of the Walled City. There will be in-store entertainment and special promotions throughout the afternoon.

A third series of Derry Girls has been commissioned and the O’Neills team will be on standby to see which hilarious new wisecrack will have viewers in stitches so they can start stitching their next winning sportswear line too!

O’Neills employ over 900 people on the island of Ireland producing a wide range of sportswear and accessories including 700 staff at its manufacturing facility in Strabane, Co. Tyrone and 200 staff in Walkinstown, Co. Dublin.

For more information visit your local O’Neills superstore or the website, https://www.oneills.com/gift-ideas/popular/derry-girls.html