Derry were ahead on the scoreboard for the bulk of the contest, only for Donegal to hit the right notes and win it in injury time 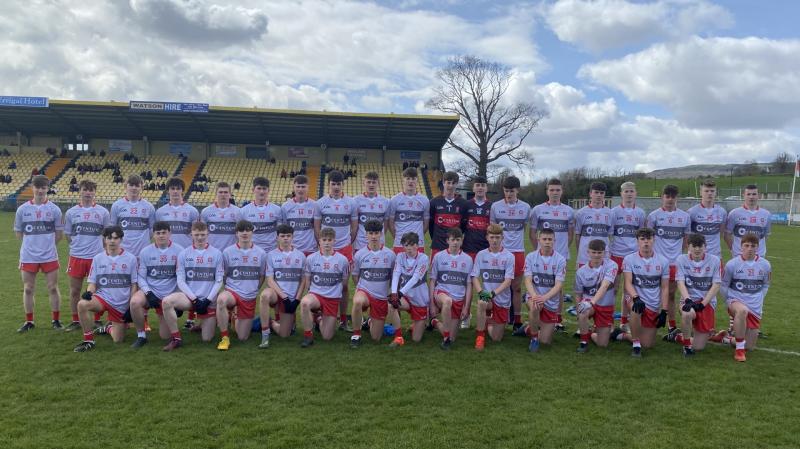 A point in the third minute of injury time from Martin Coyle gave Donegal a narrow win over Derry in their Buncrana Cup (U-16) opener at O’Donnell Park.

With Paddy Campbell's Derry four up early in the second half, it looked as though Donegal had it all to do, especially with visiting goalkeeper Karl Campbell in inspired form.

However, three late points from Danny Browne got Donegal back into the contest as Campbell saved a penalty from Dylan Mulholland and tipped the rebound over the crossbar.

Derry managed to level through a point from Michael Walls to make it 0-8 to 0-8. They were denied a goal late on with Daniel McDaid in the Donegal goal saving from the same player, it was to be Donegal’s day. They will take on Tyrone and Mayo in their other group fixtures.

Under the stewardship of former Aodh Ruadh manager Barry Ward for the first time, Donegal were 0-4 to 0-0 down with only eight minutes played as the match settled, with Tommy Rogers, Patrick Birt, Oisin Doherty, Charlie Mulholland and Rory McGonigle all scoring for the visitors.

On 14 minutes, the home side got on the board through Eoghan Scott and then, like the London buses, another score came from John James Sweeney. An effort at a point from Tiarnan Ward fell short and Derry had a lucky escape as the ball hit the butt of the post.

Despite chasing to begin with, Donegal’s position would've been a lot better had it not been for seven first half wides from decent positions and Ward got in to work a decent chance for himself only for Campbell to save.

Derry weren’t creating that many chances, although they were certainly economical - they only kicked one first half wide - with Birt’s free three minutes before the break making for a 0-5 to 0-2 lead. Then, Campbell in goal made an even better stop from a rasping shot from Browne and Derry were three up at half-time.

Cathal McKaigue pointed to make Derry’s lead a four-point one early in the second period before Donegal were awarded a penalty by match referee Mark Loughran when Philip Doherty was taken down by Fintan McIvor on 39 minutes.

Goalkeeper Campbell was equal to Mulholland’s penalty and was up on his feet again to get a touch on the Buncrana player’s rebound. When Tiarnan Ward scored soon after, Derry’s lead was cut to 0-6 to 0-4.

Derry, though, looked as though they’d keep Donegal at arm’s length, with Caoimhin Wray scoring. Browne’s three points, along with a free from Ward, meant the hosts stayed in the match. Coyle made sure they won it.

Challenge match
Afterwards, the remainder of both panels contested a challenge match, with Donegal running out winners on a 4-5 to 1-7 scoreline.

Kieran O'Kane scored two early goals, before a third was tucked home soccer style by Darragh Hennigan for a half-time lead of 3-1 to 0-3 for Donegal, with Martin Coyle pointing. Derry’s scores came from a brace from Joseph Feeney and Marcas Ó Mianain.

Derry opened the second period with a couple of scores, courtesy of Luke McElkennon and Ó Mianain, with Oisin Doherty, O’Kane, Thomas Roache and Hennigan replying to ensure a 3-4 to 0-4 Donegal lead. McElkennon and Feeney cut the gap but Hennigan slammed home a close range goal two minutes from time. Darragh McGonigle goaled for Derry with the last kick.