Banagher pull clear in the second-half against Coleraine

The sides were level eight times during the first half 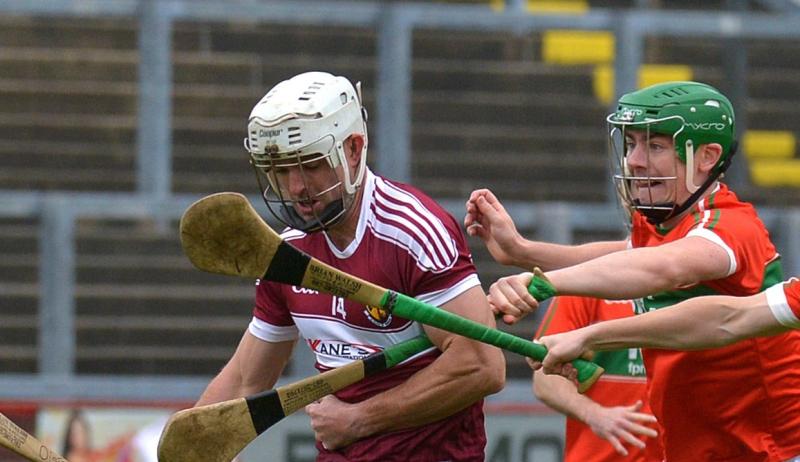 Banagher pulled clear against Coleraine in the second half to begin their championship with an away win on Saturday.

Banagher 0-21
Coleraine 0-13
The game was level eight times during a first-half where there was never more than a single point between the teams before a Sean McCullagh point put Banagher into a slender interval lead, 0-9 to 0-8.
A 34th minute Niall Holly point levelled matters for the last time as a wind-assisted Banagher, with Brian Óg McGilligan now stationed at full-forward, scored five points in as many minutes to take a commanding 0-15 to 0-11 lead.
Coleraine defended well throughout, with Paul Roantree and Pearse Dallas making a series of interceptions in the first-half. Goalkeeper Leo Passmore's wind-assisted puck-outs landed deep in Banagher's defence and set the tone for a battle at the other end of the pitch. But aside Anton Rafferty's long-range effort, they were limited to the magic of Sean Leo McGoldrick for scores against an equally stubborn Banagher defence.
The sides were level, 0-3 each, at the first water break, with Coleraine playing with the aid of the wind. As the second quarter began, both teams were off target with their shooting and it was Banagher who needed to be wary of Passmore's long clearances. On one occasion it dropped into their full-back line and needed Oisin McCloskey's positional sense to sweep up any glimmer of a goal chance.
Three times Sean Leo gained possession in the same pocket of space on the right wing and he arrowed between the posts. Banagher always did enough to stay in touch with scores from Ciaran Lynch, Sean McCullagh and a '65' from Niall Biggs.
The pick of the first-half scores was a Ciaran McGoldrick effort after linking with his brother Sean Leo who played the perfect pass.
Within 18 seconds of the restart, Liam Eoin Campbell had the ball over the bar to put Banagher 0-10 to 0-8 ahead, but back came the home side to level matters. Sean Leo's point was followed by a fine effort off his left side by Niall Holly.
The first game of last year's championship finished level between the teams, but Brian Óg McGilligan's influence at full-forward began swing the game. His point was followed by a Mark Lynch effort and an monster effort from well inside his own half from Oisin McCloskey. Banagher dominance continued when Ciaran Lynch thumped over the bar after winning the resultant puck-out.
The overworked Coleraine defence could do little to stem the tide as Banagher pushed into a six-point lead (0-18 t0 0-12) by the 44th minute.
Coleraine did have a goal chance when Dara Mooney was through, but he was hauled down by Conor Campbell at the expense of a free. Sean Leo drilled the close range free, but it was blocked on the line and with it went any chance of a comeback as Banagher ran out comfortable winners.