Dungiven back up last season's U14 title with victory over Glenullin

Glenullin hit the game's opening score in the first attack 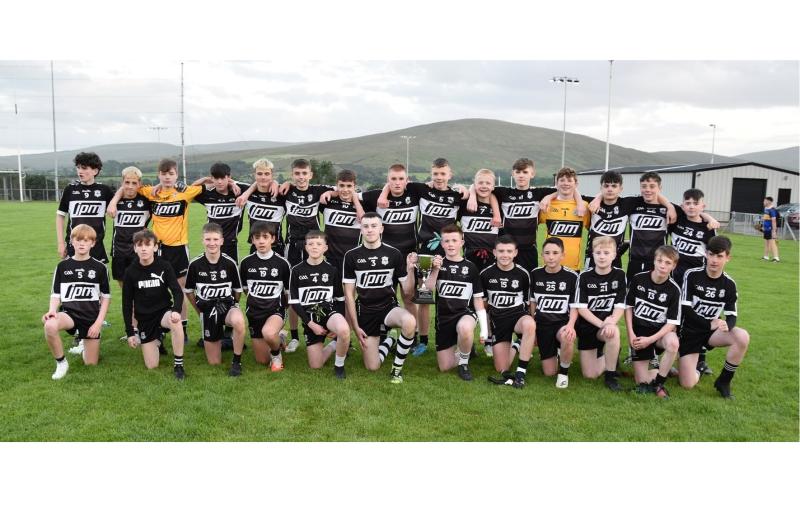 After conceding an early goal, Dungiven ran out comfortable winners against Glenullin on Friday night.

BA MULLAN AND SONS U16 B1 FINAL

Dungiven 2-13
Glenullin 1-4
What a difference a year makes, when these teams met in the U14 final last October it was a mini classic with Dungiven winning by a point.

The big crowd at Fr McNally Park were anticipating more of the same but it turned out to be a rather one sided encounter.

Dungiven were simply brilliant, always taking the right options and showing a maturity far beyond their years.

For Glenullin it was one of those games that nothing went right, they repeatedly lost their own kick-outs, fumbled possession and got turned over time after time despite a dream start.

Led by William John Bradley, they did show what they were about in the final quarter. Despite victory being long gone they left nothing on the field.

Glenullin’s dream start came about in the opening seconds. Bradley won the throw-in and they moved smoothly with Eddie Kilmartin placing Oisin Bradley who chipped the ball to the net, with the first Dungiven player to touch the ball was goalie Cahir McElhinney when picking the ball out of the net.

Within two minutes it all went wrong for Glenullin. As centre half John Paul Leadon intercepted a Dungiven attack he crashed into the fencing, injured a knee and his night was over.

The winners led at half time by 1-11 to 1-0 and it could have been worse for Glenullin as Dungiven got nothing from two penalties.

In the 21st minute Dara McGonigle’s first effort came off the bar. Ten minutes later Glenullin goalie Frank Bradley saved McGonigle’s low shot comfortably. It was not the only time that the young' keeper handled difficult situations with confidence.

After going behind in the opening seconds it took Dungiven just seven minutes to draw level through points from Padraig Haran, Sean O'Kane and Darach McGonigle.

With corner forward Mikey Harkin winning loads of possession in his free role Glenullin just could not get hands on the ball often enough. Dungiven’s running game forced Glenullin to concede frees and coming up to the first water break an opportunist goal from Cahir Murphy left Dungiven 1-5 to 1-0 in front.

On the resumption Murphy and Haran capitalised on the ball winning ability of Kevin Barry Mullan and Patrick O’Kane at midfield to open up a seven point gap. Such was the extent of Dungiven’s dominance that Glenullin had to wait until the 23rd minute before they even recorded a wide.

By half time, it was over as a contest with the winners 1-11 to 1-0 in front. Kevin Barry Mullan kicked two superb frees from the ground and overlapping wing backs Darragh O’Neill and Michael McVey also raised white flags.

Dungiven won the throw-in and a scintillating move ended with a Padraig Haran effort that just skimmed the bar. Glenullin got their second score a full 36 minutes after their first when Conrad Mullan converted his own free.

Dungiven countered swiftly with Darach McGonigle hitting the woodwork for the third time in the game and Padraig Haran lobbing the ball to the net for a 2-12 to 1-1 lead.

As Dungiven sat back Glenullin’s William John Bradley began to boss the midfield area but they just did not have enough in attack to take advantage of the possession won. Kevin Barry Mullan’s free 20 minutes from the end was the winners' last score.

With full back Padhraic O’Neill breaking up a string of Glenullin attacks, Dungiven made scoring difficult for the opposition. A brilliant point from Eddie Kilmartin just before the second water break left the score 2-13 to 1-2.

The last two scores of the game came from William John Bradley one from play and one from a free. They had chances to close the gap further but all the confidence they had shown in earlier rounds deserted them in this one sided encounter.