The final Tour de Force - a tribute to Karl McAuley

Friday will be the last ever Derry U16 final 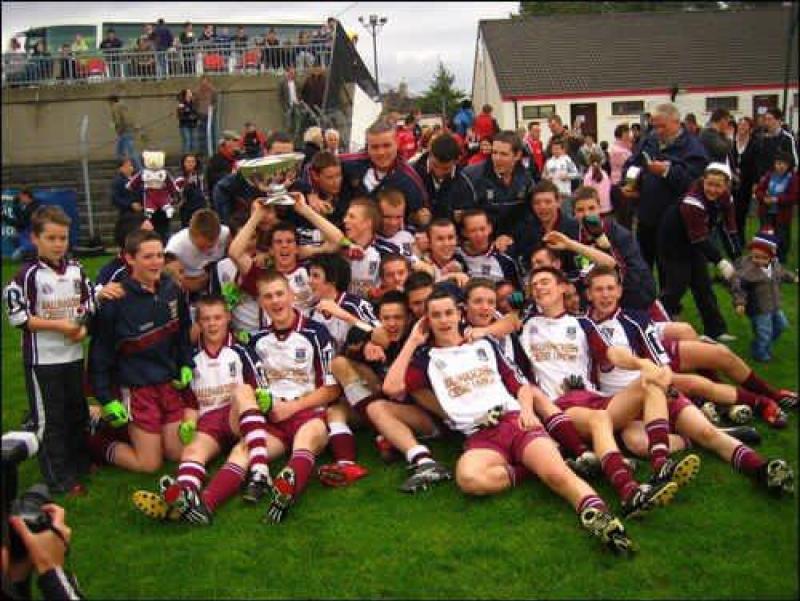 Ballinasscreen celebrate winning the 2006 U16 title.

For the last 12 years, Danny and Rosaleen McAuley, their sons Gavin and Shaun, have presented a special trophy to the Man of the Match from the U16 football final in memory of their late son and brother Karl.

Just over a year before his tragic and untimely death, Karl dragged Ballinascreen to the 2006 title, overturning their U14 final defeat at the hands of Banagher two years earlier.

The restructuring of the age grades, away from U16, means the rescheduled 2020 meeting of Lavey and Dungiven will be the last time a trophy will be presented in Karl's honour.

Fittingly, Friday's showdown will be played at Ballinascreen, but his legacy won't end there. A banner placed prominently along the new walking track at Dean McGlinchey Park will keep his memory burning brightly.

Either side of Karl's photo are images of his Ballinascreen jerseys, football and hurling. His hurl and boots, as well as his distinctive helmet are also pictured.

The generations that follow, those too young to remember his performances in the maroon and white, will be forever reminded of Karl.

The banner to be erected at Dean McGlinchey Park.

He epitomised sport. His jovial character made a team more than about training and games. On the flip-side, you'd want him in your corner when the chips were down.

Step back in time. With seven minutes of the 2006 U16 final remaining, Gavin O'Neill's penalty levelled matters and it was time for someone to stand up and be counted. Ballinascreen had that somebody. His name was Karl McAuley.

After powering upfield, he laid the ball off to Carlus McWilliams and one pass later Dean Flanagan slotted the ball beyond goalkeeper Daryl McDermott for the game-defining goal.

Ballinascreen captain on the day was Karl's best friend Alastair Clerkin. They grew up a mile apart, were in the same class at the nearby Straw Primary School and soldiered together on the same football teams.

Ironically Alastair's son was born on the anniversary of Karl's death. Alastair would place flowers on Karl's grave and is still a close friend of the family. Shortly after Karl's death, Alastair's mother Bernie left a statue at the grave of two warriors battling for a high ball, which inspired the design of the model handed out to the dozen who followed in Karl's footsteps as Man of the Match.

It helped Karl's spirit stand the test of time. The Mid-Ulster Observer's report described his 2006 final midfield performance as a 'Tour de Force'.

The year after Karl's death, Derry minors' first trial was at Ballinascreen where had been tipped to play a starring role and nail down a place on the panel. There was an impeccable minute silence in the club's hall before an army of nervous and excited trialists embarked on a morning of football.

But for that minute, there wasn't a sound. And there will be a lump in every Ballinascreen throat on Friday night when the final U16 Man of the Match follows in Karl's footsteps.

He played 'around the middle' for Ballinascreen teams, somewhere he could shape a game from. Those who knew him best, coached him and played alongside him tipped him for a long career.

“Karl was brilliant that day,” Clerkin recalls of his 'box to box' U16 final performance.

“He was just everywhere and making things happen...he covered every blade of grass.

“He would've been very consistent, but in that game, he was on a different level by his own standards. It was one of those games when he stood up and dragged the team with him.”

It was fitting that Karl's spadework made the difference, in the pressure cooker of the closing stages. Clerkin paid him the highest compliment, calling him a 'big game' player. A 'championship man'.

Martin Boyle, who coached that U16 team with Mickey O'Neill and Jerome Bradley, said how Karl, in his 'finest hour', simply 'dragged' his side to victory by 'refusing to accept' a defeat that was staring them in the face. 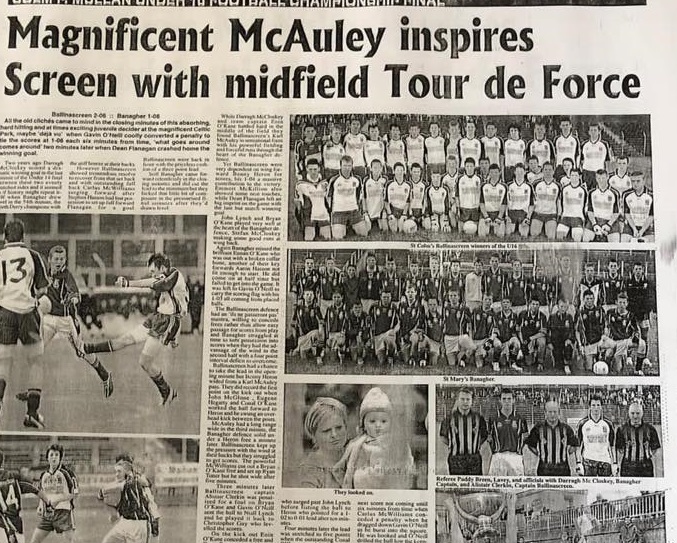 The Mid Ulster Observer match report from the 2006 U16 Final.

Outside of the white heat of battle, Karl didn't take himself too serious. At training, many would've been on the receiving end of his jokes. Then, as if flicking a switch, he'd put his game face on and deliver by the bucketful, when it mattered.

“He was there primarily for the craic and to enjoy himself and he was quite good at football as it happened,” Clerkin adds.

“He'd still be playing with all the lads he grew up with...you miss the craic you would've had with him.”

Martin Boyle was in 'no doubt' he'd have blossomed into a 'mainstay' of the club's senior team.

The Kilrea team, led by James Kielt, who went through their entire club underage careers unbeaten overcame Ballinascreen in the 2003 Féile final.

“He was our best player that day at corner back and he was a year young,” Boyle remembers.

Boyle is now the Derry minor manager, a team that includes Matthew Downey and Dan Higgins, the last two winners of the U16 final Man of the Match.

“I told them just how special an award it is as Karl was such a special person and sportsman.”

Like Clerkin, Boyle echoed Karl's off the pitch qualities.

“Karl made a lasting impression on everyone fortunate enough to come into contact with him,” Boyle said. “In a team environment he was a dream, brilliant for morale and craic among lads.”

At school, he played on St Colm's U16 Derry championship winning team of 2005, their first in many years. When asked for a memory of Karl McAuley, their coach Ciaran Meenagh looked back on their Ulster clash with St Paul's Bessbrook.

St Colm's were leading by two points, as the game ticked into the last 10 minutes in a foggy winter afternoon. After an off the ball incident, the game ' boiled over'. Meenagh points to it as a 'scary' moment for a 'typical' 16 year-old.

But not Karl, who won the hop ball, kicked two late points and alongside Anton Kelly, the pair stemmed the tide.

“It was just indicative of his character and his backbone,” Meenagh states. “He was tough and had a savage temperament...he would have gone far...I’m sure of that.

“He was just a super lad altogether, what a character. He had a brilliant heart on the field of play.”

The McAuley family will feel Karl's loss more than anyone. They'll miss him every day. But, tucked amongst those emotions, they can take strength from how he rubbed off o others.

Those who competed with and against him on the playing fields of Derry and beyond held him in the highest regard.

It's fitting the last piece of the history from the Derry U16 football championship will be the presentation of Karl's award, the final Tour de Force.

That's his legacy. He will never be forgotten.

THE KARL McAULEY MAN OF THE MATCH WINNERS