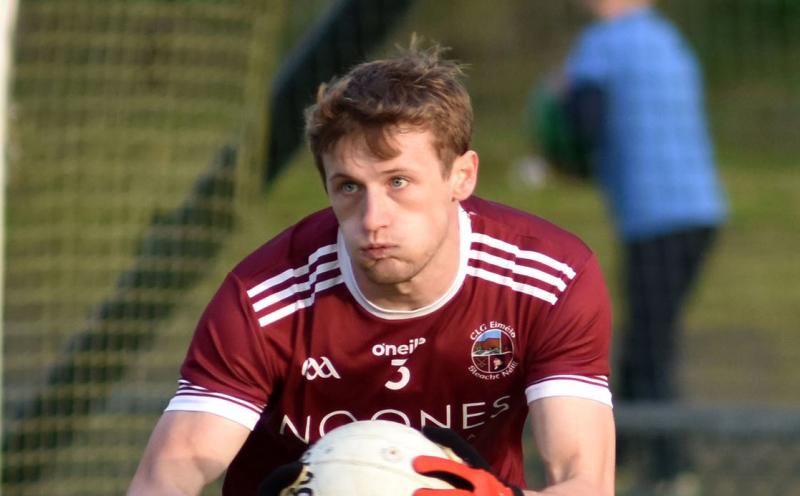 Brendan Rogers questions whether some GAA players should be professional, but admits it would create a 'grey area' between club and county.

The Slaughtneil dual star feels 'at least' a semi-professional route at county level would close the gulf between the chasing pack to the top teams.

Last week's change of direction to take away inter-county GAA players' status as 'elite', meaning they cannot continue to play like their counterparts in rugby and the Irish League.

County players' levels of preparation have increased massively year after year. Many are – like Rogers – working from home, but not every player can self-isolate to the level that their professional counterparts can.

“That's the point where the GAA is at,” states Rogers. “I would be all for at least the semi-professional idea of GAA, given the time and hours given to it.”

Rogers is friendly with 'one or two' of the Ulster rugby squad and they have compared training loads.

“He would ask me about what we are doing at inter-county, he would have an interest,” added Rogers, the holder of 13 Derry and six Ulster senior medals, in both codes for Slaughtneil.

Since being handed his inter-county debut, club and county seasons have just ran into each other.

The rugby fraternity are in disbelief at the levels GAA players are going to, even to a point of laughing and telling Rogers he is missing out.

In a different sport, the same level of commitment would be earning players a 'decent living'.

“You wouldn't have to worry about work and you'd get the rest you would need,” Rogers adds. “That where the sickener comes in and you ask 'why aren't we professional' to a degree.

“We are saying there is not the money for it because there isn't enough gate or sponsor revenue. I am just not so sure.”

Much of Rogers' success has come in the maroon and white of Slaughtneil. When asked if allowing the GAA to go down the pay for play route would be 'dangerous' for the association, he acknowledges there would be various aspects would need ironed out.

“There is a grey area there, in that you would have to be realistic to the demands of a county player,” Rogers states. “If you are getting paid to play for the county, they will be saying you're not allowed to play for the club any more.”

That's the concern. But Rogers points to rugby's tiered system allowing players on 'certain contracts' to return to their clubs.

In GAA terms, Rogers outlines that professional players wouldn't be able to play for their club, semi-professional would only play in the club championship, with other inter-county panellists playing all their clubs' games.

“That would bring friction, it might affect the club,” he admits.

It could lead to some players not wanting to play for their county, while on the other side of the argument Rogers feels players would commit to their county 'for a long time' because of the money involved. No longer would players opt out of inter-county for a season and return the following year.

“It would be (a case of) 'if I dip away this year, I ain't going to get a contract ever again' that would be the psyche of it, it would change.”

With Dublin's runaway train winning the last six All-Ireland senior titles, Rogers' logic is that the top teams won't get any more elite. However, but with a better chance to prepare like the top teams, the chasing pack would eventually catch up.

“Someone from Leitrim might have to travel to Dublin all the time for work and back to Leitrim to train,” he offers.

“Can you imagine them taking three or four hours of their day travelling and the time spent training. You'd soon notice a difference in a team, if they were making that sort of change. They'd have so much more time to improve and they would get a professional in to train and coach them, to get them tactically ready.

“The dynamic would change a lot. It may not be in the first year or so, but if you were to take a 10-year span, things could change dramatically.

“Are Dublin or Kerry going to change much as a result? Hand on heart, probably not because there are so many of them having half days and a semi-professional lifestyle.

“You would find, if the other guys were treated the same, they might get the same result to an extent. You'd be looking forward to a level platform, that was clear, and everybody got to play from it, you might find the gap might close quite quickly given that Dublin spent 10 or 15 years getting to where they are.

“If other counties had the same time with the same backing and development, you'd wonder where it would take them. There is no saying that Dublin is going to stop, but the progression from bottom to top, you'd have to imagine, would be a lot greater than the top getting more elite.

“There has to be a plateau somewhere...even at elite level. Barcelona and Manchester United, and all those teams, lose their elite (years of dominance) at some stage or another. They may not winning, but they go back to third or fourth."