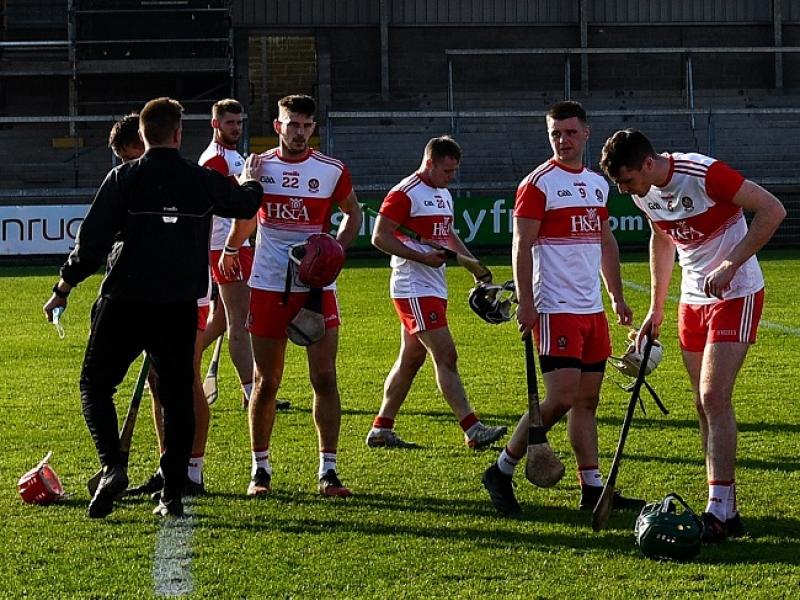 CHRISTY RING CUP ROUND 2A

Despite losing Paddy Kelly to a second yellow card after 50 minutes, a ravenous Derry side - built on a tremendous defensive effort - led 0-12 to 0-9 and were well worthy of it.

Less than two weeks after losing to Down in the Division 2B promotion final, Derry were 0-5 to 0-1 in arrears after 16 minutes and looked in deep trouble.

In the reshuffle from the league, Richie Mullan played as the sweeper.  Eamon McGill went to centre back, Brian Óg McGilligan picked up Daithi Sands and John Mullan went to corner-back where he picked up Ronan Costello before switching to Daithi Sands at half time.

It allowed Conor Woods to play as a sweeper for Down and with Cormac O'Doherty playing as an out and out midfielder, Derry's attack never looked like breaking loose.

Mark Craig began to come into the game and by half-time Derry had pegged the gap to two points, 0-7 to 0-5.

The Oakleafers put O'Doherty to full forward at the break, brought in Eoghan Cassidy to midfield and added Fintan Bradley to their attack.

A monster Conor Kelly point levelled matters within two minutes of the second half and as they trotted off for the second water break, they were again tied, this time at 0-9 each.

Even after losing Paddy Kelly, Derry's defence continued to have the upper hand.  Richie and John Mullan were excellent.  With every interception and Down wide, Derry grew in confidence,

Derry had one foot in the semi-finals, before the game swung in the blink of an eye.  When Matt Conlan found Donal Hughes in space, the latter lashed the ball off goalkeeper Kelly's hurl and into the net.

The energy Derry expended to get back into the game was all gone and the Down momentum swung into action.  Hughes and Paul Sheehan added points as Down went three points clear.

Brian Óg McGilligan, now at midfield, blazed over the bar with a glimmer of goal on and even when Conor Woods stretched the gap to three, Derry came charging again.  McGilligan, Odhrán McKeever and Richie Mullan were all involved in the move, but somehow a tame shot was saved by goalkeeper Keith and Down held on for victory.

Down now advance to the semi-final, with Derry now in Sunday's qualifier draw (8.00) with Sligo, Offaly and Roscommon.