Slaughtneil attacking power a nut too difficult to crack

Kevin Lynch's set for another clash with the champions 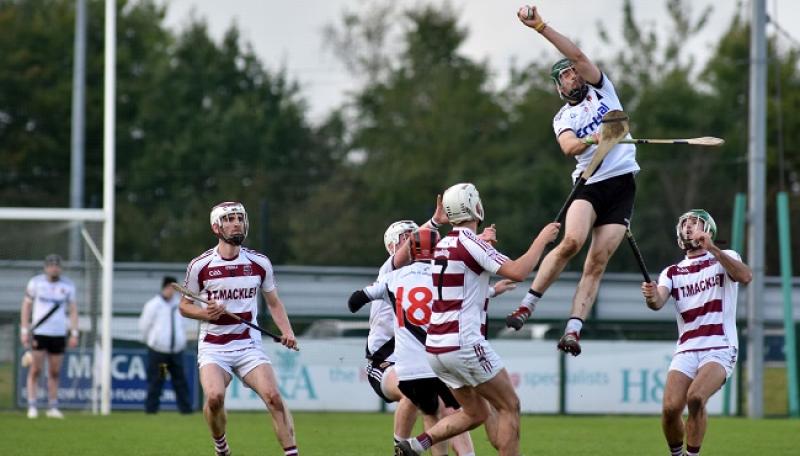 It went on for an eternity.

Following Conal McCloskey's leg break, the 2014 final seemed like it would never end.

And in the absence of referee Garrett Duffy's stoppage time being communicated to the fourth official's board nobody in Owenbeg knew how long was left.

Kevin Lynch's had time to save the game with points, but in the bedlam of injury time, goal was very much on their minds. Ball after ball rained on the Slaughtneil defence. Hand after hand, they fielded it and cleared their lines.

A year after smashing through the glass ceiling of beating the Lynch's, they were determined that it wasn't a once off. It was a changing of the guard.

The following year, it took extra time for Slaughtneil to see off the Dungiven men's challenge and since then, Banagher and Slaughtneil have closed them out of the battle for the Fr Collins Cup, one they have not held aloft since 2011.

In 2018, at the end of an epic encounter in a Ballinascreen cauldron, Richie Mullan – who put on an exhibition of free-taking – missed a late free as Slaughtneil edged home by the narrowest of margins.

Last year, Slaughtneil looked deep inside themselves when Tiarnán McHugh's powerful shot found its way to the net just seconds after half time. An upset was on the cards, but Michael McShane's men wrestled back the pendulum in their favour, before steering their way out of the storm.

“Our boys know what they have to do,” said Lynch's manager Geoffrey McGonigle after their semi-final win over Ballinascreen.

“They have to try and beat the best team in Ulster, so if that's not motivation, what is?”

Goals from McHugh and Odhran McKeever put them in a commanding lead they let slip against Swatragh in the first game of the season.

In their win over Banagher they needed a late burst to get over the line.In their semi-final win over Ballinascreen, they cut loose and made hay in the room afforded to them.

McKeever went through two markers in a first half that saw McHugh bag a fifth goal in four games. Niall Ferris was the player who tied all the pieces together.

McGonigle has structured his side around the Kelly brothers in defence. Paddy was one of the best players in last year's final and he remains at full back, with his younger brother Conor now in the number six jersey. Behind them, Sean takes over from BJ Lagan in the goalkeeper jersey.

From last year's decider, Niall Smyth makes way for Ciaran Steele in defence and the only other likely change will see Darragh McGilligan get the nod in attack with the unavailability of Corey O'Reilly this season.

Padraig O'Kane has been used from the bench and has an uncanny knack of finding the net.  O'Kane, McGilligan and midfielder Eoghan Cassidy were all part of the Derry Celtic Challenge winning squads, coached by Ryan O'Neill, and are the latest of Kevin Lynch's recent production line.

Goalkeeper Seán Kelly and Richie Mullan have three minor championships and two Ulster titles, with another six of their semi-final winning team have at least one minor medal in the club's recent dominance under the eye of Kevin Hinphey.

They come up against Slaughtneil, who have all won minor championships on their rise to the top of the tree. Under Michael McShane, they developed as a team.

In the semi-final against Swatragh, it was their use of the ball that stood out. Their first three balls went via Gerald Bradley and with 1-2 on the board, they could've easily had another two goals.

When the 'Swa tried to close off the middle, Slaughtneil went around the edges with a inch perfect short game and went over the top.

Their third option was raw pace in the form of Brendan Rogers. Lurking on the wing, he took off and tore Swatragh asunder.Sunday will be different.

Kevin Lynch's won't afford them the same space and it will come down to how well Slaughtneil can adapt.Their sweeper system of last year, with three inside forwards and two link forwards, with Mark McGuigan and Brian Cassidy's workrate has been parked.

It has been the traditional two lines of three, with Cormac O'Doherty foraging around midfield.Against 'Screen, the half forward line were too close and choked their room for the McGuigans – Jerome, Sé and Mark – to operate in. When they opened it, they went to town.

If Slaughtneil adopt the same formation, it will prevent Liam Óg Hinphey from plonking himself between Conor and Paddy Kelly to mop up ball.

Kevin Lynch's big advantage is now having Seán Kelly in goals and he can act like a sweeper 'keeper, like Oisin O'Doherty does at the other end. If the Lynch's are forced to go man for man, Kelly's alertness off his line will come into play.

The last two years were terrific encounters.  A smaller crowd will take from the occasion, but this year's version will follow a similar trend. Little has changed. Slaughtneil's attacking unit, if anything has got more potent and it points the way towards an eighth successive title.

1 – Sean Cassidy v Tiarnán McHugh – In the last two games between the sides, Tiarnán McHugh has proved to be a handful for Slaughtneil’s defence. He has five goals to his name and had a hand in two others during the season. This will be an area Michael McShane will be keen to come out on top of. He did move Shane McGuigan back during last year’s final, but it would upset their defensive balance.

2 – Chrissy McKaigue v Thomas Brady – This was a fierce battle in last year’s final and Brady fits the bill to once again go man to man with McKaigue. In their games with Dunloy, his ability to impose his game on Paul Shiels put Slaughtneil in the box seat to victory. Both McKaigue and Brady are ultra competitive and will test each other to the full. The Lynch's will hope he recovers from his knock in Sunday's football clash with Loup.