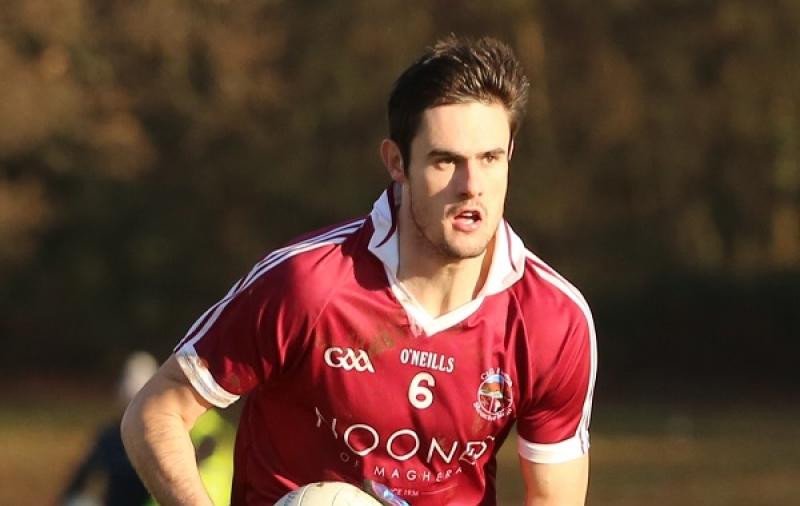 Christopher McKaigue and Kevin O'Neill are in charge of Desertmartin

The lopsided junior championship begins this weekend with Group A kicking into action. Desertmartin and Craigbane have dropped from intermediate, to be paired with 2016 junior champions Magilligan. Also in the mix are Moneymore and Drum, who have lost the last two junior deciders.

In an interesting subplot, Derry senior captain Chrissy McKaigue and County Chairman Stephen Barker will be in opposing camps.

Ballerin have been paired in the other section with Doire Colmcille, Ardmore and Sean Dolan's who have struggled to find any kind of form in recent seasons.

James McGrath returns as Craigbane boss, but points to a lack of action in what he describes as a 'trying season' for the players.

They learnt a tough lesson against Tyrone side Naomh Eoghan, an amalgamation of Dregish and Newtownstewart. It was their first game since February 26.

Lee Moore returned from Australia but transferred to Dublin club Thomas Davis to train. He is back with his native Craigbane but is on the injured list. He is joined by Bliain Gormley, who made had initially made it back from a gruelling injury.

John Kerlin has returned from Australia, but like the rest of the squad is lacking game time.

Craigbane have brought through underage talent in recent seasons. Fergal Mortimer in attack is an important player and will be joined this year by Jude Óg Moore and Jude McLaughlin, who has been their main man in attack.

Brian Rainey remains as as experienced player, who has coached many of the players coming up through the ranks. In defence Naoise Ó Mianáin, Oisin McCloskey and Conor McLaughlin have made it though and will line out in front of goalkeeper Conor McGuinness.

They face Magilligan this weekend, who have former Derry underage player Shane Kealey from Faughanvale in charge, with another 'Vale man Kevin Morrow and Eamon McLaughlin.

Kealey hails the quality of the panel, while he lamented how small it is. It looks like they will be without Colly Mullan who ended up on crutches after an injury at training. A knee injury has also kept Ciaran O'Hare out this season.

After 'a good preseason', Kealey has struggled to get challenge games and the latest lockdown after the recent Covid-19 cases in the local Limavady area hampered their progress further.

The Joe Brolly Cup won't be won or lost on Friday night, but the loser will be on the back foot as one team from the group will drop out the race.

There shouldn't be much in it, but Craigbane should come through.

There is a local derby on Friday night, with Desertmartin and Moneymore crossing paths.

Both clubs have new managers. Cookstown's Jason Quinn is at the helm in Moneymore, with clubmate Daire Cummings along with him.

They were dealt a blow with goalkeeper Liam Macinnes sustaining a broken leg in training, leaving Derry Chairman Stephen Barker and Padraig Donaghy vying for the number one jersey.

Rory Young hasn't committed this season and while Paudie O'Neill is back out helping with training, it's uncertain if he will return to the action on the pitch.

Quinn reckons their team this weekend could have '11 or 12' players under the age of 24. Oisin O'Neill, Cian O'Neill and Abban McCloy have broken into the team in recent years. This season Deaglan Mallon and Lee Colville have joined the panel.

Desertmartin brought in Slaughtneil duo Kevin O'Neill and Chrissy McKaigue as their managers, who are assisted by Danny Murray and Ciaran Higgins.

The Saffrons have dropped down from the intermediate grade and outside of Ronan McGuckin's serious ankle injury sustained early in the season, O'Neill report a clean bill of health including Enda McGuckin who has had injury problems.

Gavin Donnelly and Eunan McElhennon made their debut last season, with Callum Ormsby coming into the fold this year.

In a group where one team will drop out of the championship, there will be a certain bite to all the games. Desertmartin should come through this one.