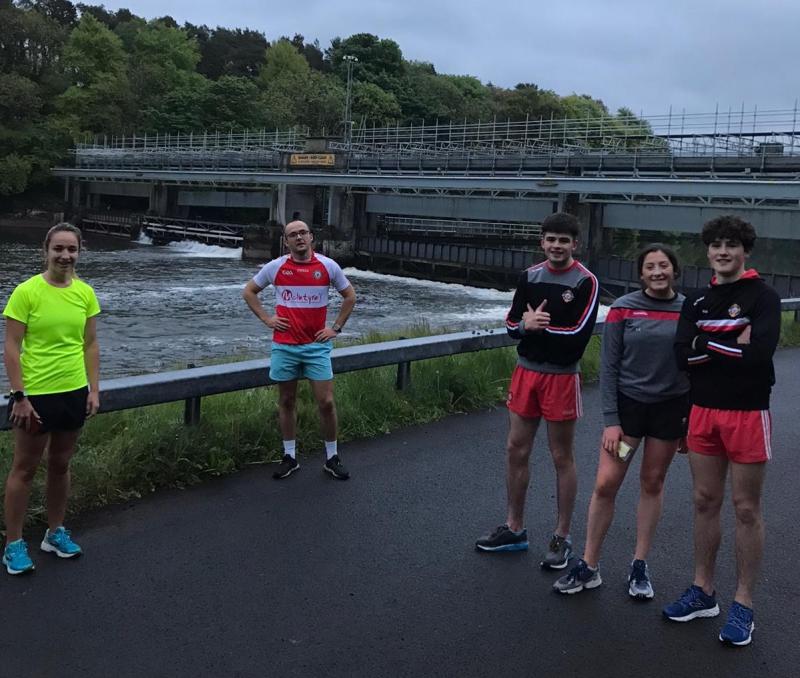 At six o'clock on Sunday morning, when most of County Derry were grabbing the last few hours of kip, the Kilrea community were bursting with pride.

Their 1,000km 24-hour relay exceeded all expectations. The late Brian Calvert would've had a glint in his eye. His children jogged along Church Street towards the town's Diamond to a ripple of applause from the socially distant well-wishers.

Covid-19 dictated the magnitude of their welcome. Below the surface, was a community united by a buzz and togetherness that will never be forgotten. It knew no boundaries. Pearses now overseas, also ran, walked and put their hands in their pockets. All in the name of the chosen charity - the NI Chest, Heart and Stroke Association.

Last year, a sudden heart attack took Brian from a community he was a cornerstone of. Not only was he Kilrea's U16 football manager, but his 17-years as an instructor at the local Woodhall Outdoor Pursuits Centre shaped the lives of many.

Three-years ago, Brian cycled around Ireland with his friend Randal McAllister in memory of Randal's daughter and to raise money for two cancer charities. It was an eight-day adventure, taking in 1,200km of Ireland's testing hills and plains.

Last weekend's event in Kilrea, would've been something Brian would've been at the forefront of. Tommy Donaghy would not have been far behind him.

Tommy also passed away last year. He was a prominent clubman, a talented footballer in his day and embraced fitness in his later years. He was an avid runner around the town and when the club kitted out their Pearse Park gym, Tommy would train other men there, helping to keep them healthy.

An offering of themselves for the good of others and Brian Calvert and Tommy Donaghy's memories were honoured on Sunday morning. In a very fitting manner. The seismic response told it all.

It all emerged out of senior players Brian Óg McAlary and Karen Kielt's running exploits to maintain their fitness. An instinct to 'raise some money' transformed into a relay that just grew and grew.

The rest of the community – both at home and abroad – put their shoulder to the wheel and the distance quadrupled by the time the Calverts crossed the finish line.

The aim was to raise what later proved to be a modest £2,000. With every passing hour, the money was pouring in. At the time of writing, the Justgiving page nudged past £25,000, by the time gift aid is accrued.

Brian Óg and Karen were backed by the committee. And Kilrea's core did the rest. Step by Step. Kilometre by kilometre. Pound by pound.

Northern Ireland Chest, Heart and Stroke's mission statement is about leading the fight against the illnesses highlighted in their name. Kilrea have more than done their bit.

They are this week's GAA story of selflessness, but they are not on their own. The previous week, Coleraine pooled together for a 3,000km relay to raise money for the Samaritans and Christina Passmore's contribution deserves a special mention. 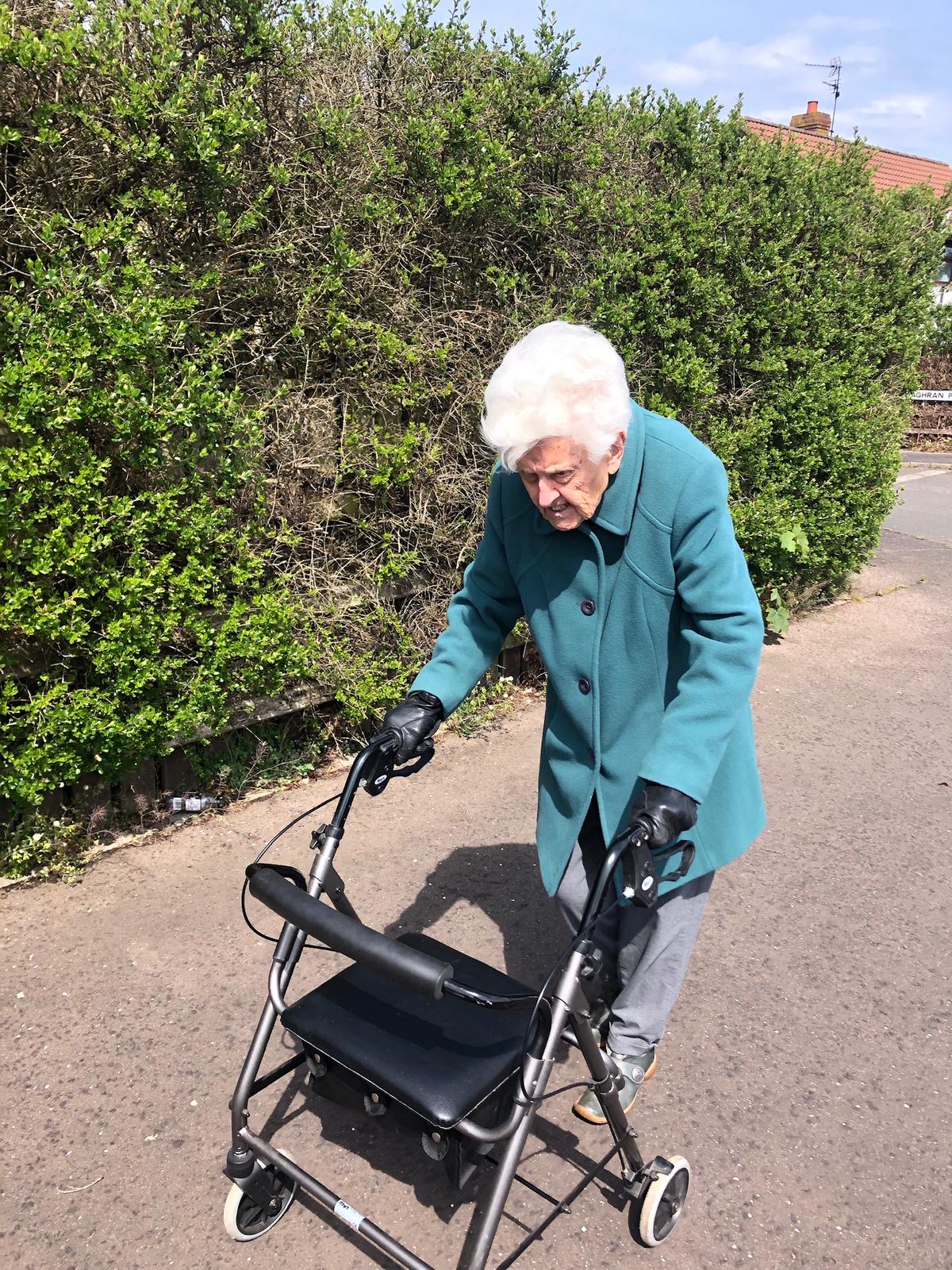 Christina Passmore does her bit in Eoghan Rua fundraiser

The GAA giving theme continued. It was impossible not to be touched by the Kildare man Dan McCabe's rendition of Mary Black's A Song for Ireland.

It will be the best four and a half minutes you will spend this week. His voice is staggering, but it accompanied photos from every corner of Ireland (and a few overseas) depicting GAA clubs' support during the current pandemic. Make sure you watch it.

We can all relate to it. Dungiven united to setup a community group within days of lockown. The same thing happened in Ballinascreen, with the local GAA club also donating their lotto proceeds.

“It was a chance for the club to contribute to the community during these difficult times, because over the years the community has played a massive role in the running of Ballinascreen GAC,” Mickey Boyle pointed out in an interview last month.

There was a photo of Ballyronan Marina Centre, which Loup were using as a base to mobilse their support for the local community in the surrounding area.

Along the shores of Lough Neagh, Ballinderry made their changing rooms available to healthcare workers to change on their way home from a shift.

In Ballymaguigan, a slick supply of food wasn't lost on the locals.

“Winning trophies can be very uplifting, but in these 'trying times' this is what the GAA is all about,” was a sentence from a handwritten letter. It was sent to the club by one of the club's senior citizens who was 'honoured' to be a member after receiving one of the hampers. 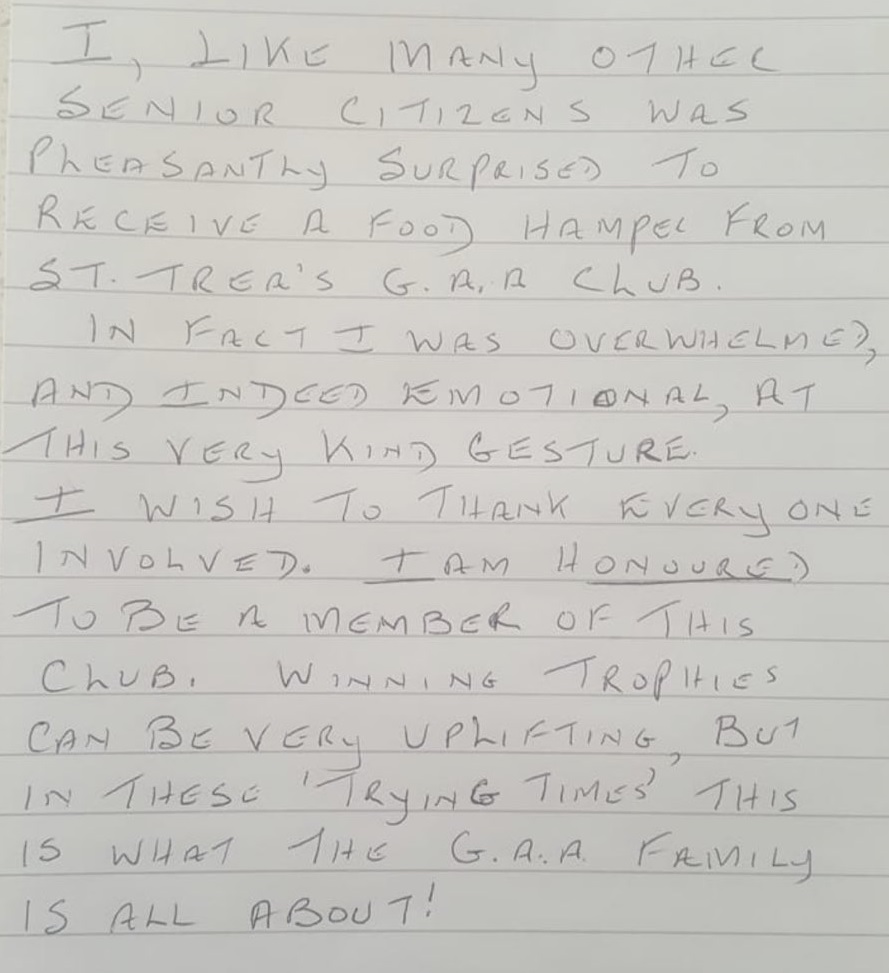 A letter sent to Ballymaguigan club

The GAA, the gift that keeps on giving. We complain about it and, no doubt, we will again. For now, it's time to soak up every drop of goodness it oozes.

And it's not all about money and gifts. It is about time. Within days of the lockdown, Dungiven began a skills competition to engage its younger members and only last weekend, they posted up a montage of their senior players' baby photos. It will generate laughter, slagging and craic. Three things we need plenty of at the minute.

Andrena O'Kane devised a skills challenge that tested the underage skill and gable walls of Banagher, one that other clubs adopted for their own.

On Sunday, former Derry coach Killian Conlan's son Dan was throwing dummies (using both feet) before pinging the ball off the back stanchion in the goals in their back yard, which hugs the boundary of Shamrock Park.

Off the pitch, Paul Gunning and his father Sean have been engaging 20 teams in Glen's online quiz. Noel McKenna has been doing the same in Castledawson. Derry's GAA's social media feed has had interviews with past players recalling moments in the red and white.

Ronan Rocks made one phonecall to a former county player and soon Mickey Sheehy was on the phone to his father chatting football.

I pinged a message to Joe Ó Muircheartaigh and a few days later my father-in-law Patsy Kennedy's phone rang on his 85th birthday. On the other side of the line Joe's uncle Mícheál, the broadcasting legend. You might as well have reached Patsy a million pound.

Tommy Diamond. Niall Mullan. Kieran Stevenson. Jim McGroarty.  Ciaran McNally.  Eugene Laverty. Kenny Bradley. Gerry McElhinney. Tommy McKenna. Colm Mulholland. Ten men I never spoke to in my life before, but in recent weeks they have lifted the lid to our readers on their memories. And they loved doing so.

With no sport to attend and people getting fed up with the inner workings of Covid-19, nostalgia is the welcome solace.

And, if Kilrea and other clubs' community spirit are signs, then the GAA will be a better place when the balls start flying around the pitch again.

- Lavey artist paints a picture of where we want to return to. More...