Christine Chivers depicts the scene we are all missing during lockdown 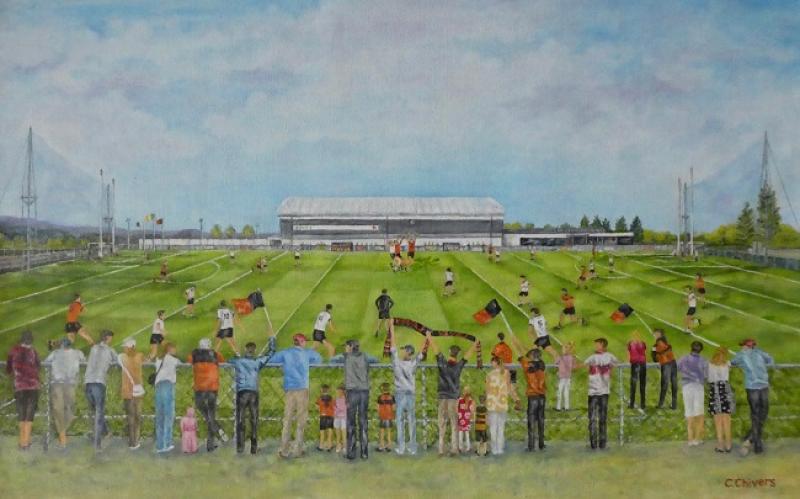 Christine Chivers, wife of Lavey Chairman and mother of midfielder Damian, has put her time and talent to good use during the sporting lockdown.

A former art teacher, Christine's weekly schedule involved the school runs and looking after her grandchildren, while playing golf and helping around at Lavey club.

"The club gates were locked up and I missed calling in there every day. My husband, Paddy, is Chairman of the Club and could always have found an excuse to call in and attend to something or other."

In her new routine, she has been updating all the family photo albums.  After being inspired by Mary K Burke's photo of her son Damian in action for Lavey against Greenlough last season, she decided to paint this masterpiece, which called‘Love Our Club, Love Lavey’.

"I took some photographs of our clubhouse and top pitch to help with the overall composition. I was trying to capture the colour, excitement and special atmosphere of match days.

"The only part of the painting that is from an actual game is the high catch at midfield; the rest of the players and supporters are imagined, although I did model two of the younger supporters on Eimear and Aodhan, my grandchildren, who are under-age players and keen fans."

For an extended feature on Chrstine's art, grab a copy of next week's County Derry Post.