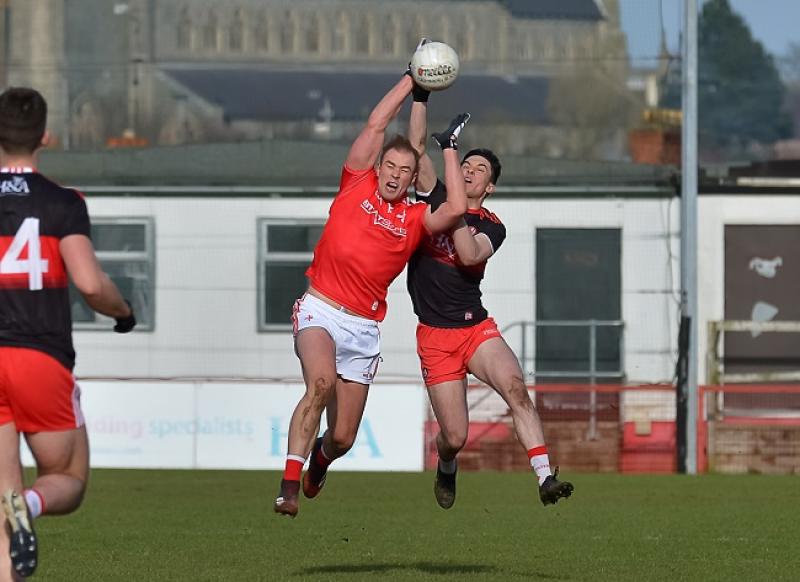 Goals from Shane McGuigan and Niall Loughlin saw Derry home after a scrap in Sunday's dour encounter at Celtic Park.

The win takes Rory Gallagher's men onto five points in the table, into third place on score difference behind Longford and ahead of Down and Offaly.

The Oakleafers head to Páirc Uí Chaoimh on next week to face leaders Cork before hosting Longford and travelling to Offaly on the last week of the campaign.

Derry, playing against the wind, went into a 0-3 to 0-1 lead with points from Shane McGuigan (2) and Benny Heron.

A McGuigan goal helped Derry into a 1-4 to 0-1 advantage by the eight minute, before Louth recovered to leave just a goal between the sides after 17 minutes.

In the seventh minute, Derry's dominance paid off. A kick-out from Lynch was won by skipper McKaigue. When the play developed forward, Niall Toner drew goalkeeper Craig Lynch before offloading for McGuigan to palm to an empty net.

Then came the talking point of the first half when Padraig Cassidy was unceremoniously hauled to the ground by Dermot Campbell but no penalty was given.

To rub salt into the wounds, Louth had the ball in the net seconds later.  Ryan Burns took advantage of a mix-up and intercepted Odhrán Lynch's pass to set up Declan Byrne for the easiest of goals and the sides were level, 1-4 each.

Derry led 1-6 to 1-5 at half-time but Burns curled over two frees to put them into the lead for the first time in the game.

McGuigan, who finished with 1-7, levelled matters before Shea Downey floated over the bar.

The home side eventually broke Louth's resolve with a Niall Loughlin goal.  The Greenlough man was making a first appearance since Derry's 2017 qualifier defeat to Mayo and he palmed home from a Toner pass.

Louth replied with two Burns frees and there was just the kick of a ball between the teams again before a curling McGuigan free sealed victory.

Gerard McSorley and Brendan Rogers were both dismissed on a second yellow cards, at different times, in the closing stages but it mattered little as Derry held on.

For full analysis, photos and reaction get a copy of Tuesday's County Derry Post.