Wasteful Derry dumped out of U20 championship by Antrim

Derry fail to score for 44 minutes 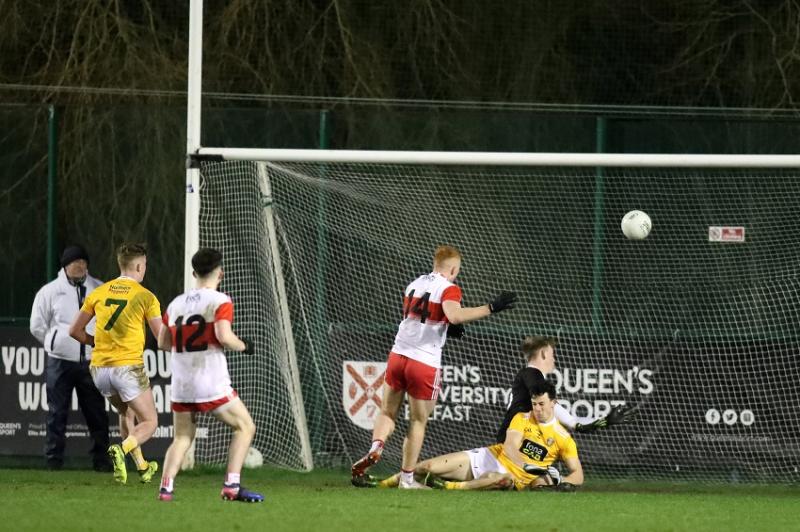 Michael McMullan reports from The Dub

Derry kicked themselves out of the U20 championship against Antrim in blustery conditions at The Dub on Friday night.

Mickey Donnelly's charges trailed a slick home side, that included members of his Lurgan Hogan Cup winning team, 1-6 to 2-1 at the break, thanks to an inspired performance from Pat Shivers. The Cargin man was stationed at full-forward and the Saffrons made the breeze pay.

Conleth McShane finished to the Antrim net in the third minute, at the end of a move started by Ryan Scullion's kick-out to Alex Doherty.

Antrim replied four minutes later with with a solo effort from Adam Loughran, who powered his shot past Scullion after picking up a Shivers line ball.

Derry hit the net again in the ninth minute when Jude McAtamney bundled over the line after McShane had a shot saved by goalkeeper Luke Mulholland.

It was Derry's last score for a staggering 44 minutes and four Shivers points had Antrim two points up at the break.

The Oakleafers began the second half brightly but squandered 1-3 in the first ten minutes, include McShane's missed goal chance after a defence-splitting pass from Conleth McGuckin.

Antrim lost goalkeeper Mulholland to an injury and Derry failed to capitalise on his replacement Gary Murray's struggle kicking into the breeze.

In the closing stages, Jude McAtamney blazed over the bar with a goal at his mercy.  Referee James Lewis, who didn't allow any free flowing play all evening, indicated six minutes of stoppage time, which extended into ten duo to further breaks in play.

Lewis sent off James Diamond on a straight red card for an off the ball incident that saw Marc McAfee dismissed on a second booking.

An Alex Doherty free was all Derry could muster and Antrim held on for a deserved win.