Emmet's need to rise to face the Kings of club hurling 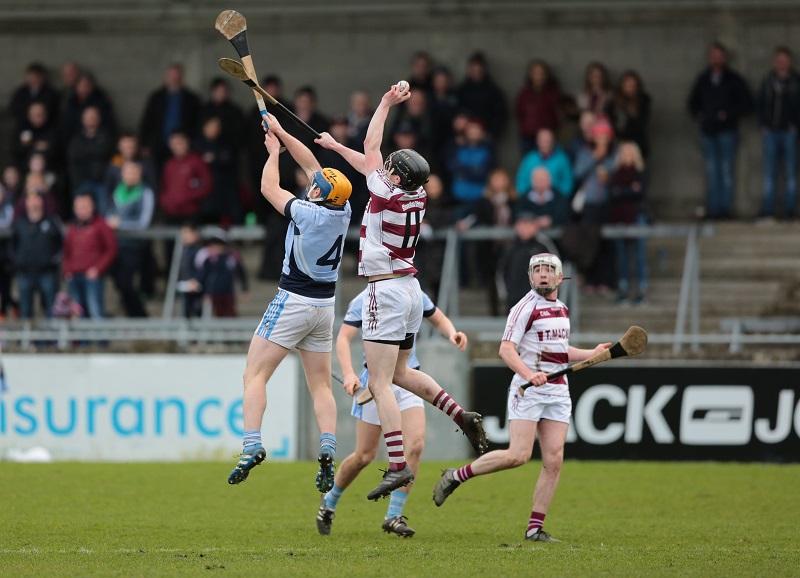 Brendan Rogers in action during Slaughtneil's defeat to Na Piarsaigh.

As Henry Shefflin revelled in the aftermath of Ballyhale's All-Ireland glory on St Patrick's Day 2015, Slaughtneil bolted from the bowels of the Hogan Stand to contest that season's club football decider.

On Sunday, Shefflin and Slaughtneil hurlers' supremo Michael McShane will lead their troops into battle for the right to return to GAA's Mecca later this month.

While Slaughtneil have been the story of the club scene, batting on two fronts in the latter half of the decade, Ballyhale added another title in March, their seventh All-Ireland, crowning them as the undisputed Kings of club hurling.

Not since two goals from James Stephens' Tadhg Dwyer in the 2017 Kilkenny semi-final have the Shamrocks lost a championship game. They have won all 16 games since.

After conquering Ulster for the first time, the Emmet's went down to Cuala by 13 points. Twelve months later they had Na Piarsaigh on the ropes before losing their footing and slipping out of the All-Ireland race by seven points, despite the Limerick champions going down to 13 men after half-time.

After their third Ulster success and a commanding performance against Dunloy in the decider, Slaughtneil are more streetwise, have developed into a better all round team and have been able to concentrate solely on the 'wee ball'.

With the calendar moved forward, preparations needed tailored. After the celebrations died down, the black smoke was blown out of the system before it was time to get back to the grindstone.

A trip for a challenge game against a Wexford select, was followed by a free-scoring clash with Antrim as McShane's side sharpened their focus. Their preparations continued with a game against Ulster junior champions Coleraine.

A long-term injury to Paul McNeill has robbed McShane of one of his key defensive cogs. Especially when a glance at the Ballyhale attack has two time all-star forward Colin Fennelly outside their top five scorers, though he has been central to their ability to carve out goal chances.

It's common to see him hunting down defenders in possession, something that has been the cornerstone of Kilkenny's success at senior level. They will meet their match this weekend. The Emmet's never lack desire.

It's the balance of Ballyhale's attack that provides the wow factor.

TJ Reid picked up an injury in their opening round win but amassed 3-68 across the campaign. Adrian Mullen, Eoin Reid and Brian Cody need watching, while the name of Eoin Cody (6-20) will also have figured when Slaughtneil formulate their match-ups.

Shane McGuigan could well see himself anchoring the defence, with Karl McKaigue keeping an eye on Ballyhale's goal-poacher Eoin Cody.

It was the Emmet's defence that excelled in their win over Dunloy, winning every individual battle with the confidence of goalkeeper Oisin O'Doherty back between the posts.

The surroundings of Newry, the scene of their best performance to date, will give Slaughtneil an advantage. They are unbeaten in championship action there, following their memorable All-Ireland football semi-final win over St Vincent's and emerging victorious in a war of attrition against Kilcoo.

A glance at the scorelines from Ballyhale's seven game path to Sunday's showdown points to a generous concession rate that will have no doubt struck a chord during Slaughtneil's scouting.

Likewise, there will be a concern over how much they squandered in the first-half against Dunloy. A similar story on Sunday won't cut the mustard.

The Shamrocks' defence has a Liam McCarthy winning theme to its spine. Centre-back Michael Fennelly (8) and full-back Joe Holden (4) hold Celtic crosses and the experience that brings.

Mark McGuigan is likely to tuck into midfield, if Gerald Bradley drops back to the sweeper role where he excelled against Dunloy.

Playing with a two man half-forward line would be a cause of concern for the Derry champions. Ballyhale wing-backs Evan Shefflin and Richie Reid have chipped in with points.

Shefflin also raids forward from defence and his uncle Henry may ponder the idea of pushing him up on Gerald Bradley.

Reid (Richie) missed the Leinster final due to a tour of duty in Lebanon with the Irish Army but was home on leave over Christmas. He is expected to take a place in the starting line-up, with brothers TJ and Eoin. His long deliveries into their inside attacking unit is another aspect of his game.

It all points towards a need for Slaughtneil's attacking unit to click. It's their toughest test of the club's history by some distance. But they have a knack of always delivering a performance. They thrive on adversity and their golden generation of slick hurlers have proven they can dine at hurling's top table.

Their performance against Dunloy was billed as the best in Michael McShane's tenure. They will need the same on Sunday...and more.

In their Ulster final win over Dunloy, McGuigan was a considerable presence at centre-back but still carried out a man marking job on Keelan Molloy. On Sunday, he could be tasked with picking up Ballyhale go-to man TJ Reid. McGuigan is strong in the air, is a big occasion player and his ability to create space as a footballer forward could help him hone in on Reid's ghosting game.

Reid has led the way on the scoring front for Ballyhale but he has stepped into the role of puppet master since Shefflin hung up his hurl. He can surge to the wing to offer himself as a puck-out target. His frees are unerring and Slaughtneil's tackling will need to be sheer perfection. However, Reid offers the Kilkenny giants so much more. He picks up ball from his defence and his vision for a pass can unlock defences.

Paths to the Semi-Final: