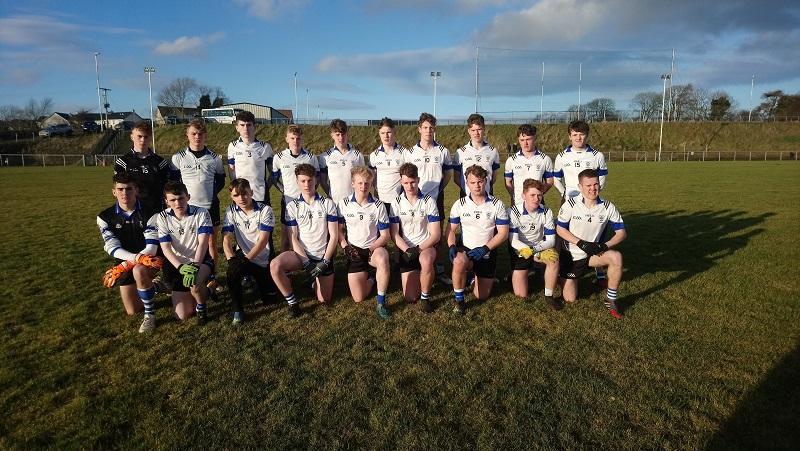 The Maghera team pictured before their defeat to Letterkenny

MacRORY CUP
U19 'A' Football

A 19th minute goal from Jack Alcron put St Eunan's on their way to a deserving win over St Patrick's Maghera at a blustery Banagher yesterday.

The Letterkenny side dominated the midfield exchanges and with a devastating counter-attacking game, they tore Maghera asunder in the second-half.

St Eunan's played into the wind in the first-half but Alcorn's goal, after Dylan Dougan's pass to the dangerous Shane Monaghan split the Maghera defence, gave them the impetus to lead 1-3 to 0-2 at the break.

Cahir Higgins scored both points for a Maghera team who were bossed by St Eunan's in virtually ever sector of the pitch.

Sean Kearney hit an early second-half point but it wasn't long before Letterkenny went on the rampage and Kieran Tobin went upfield to palm home a goal, created by Alcorn and Monaghan.

A 43rd minute goal from Shane O'Donnell, made by a lung-busting run by corner back Jamie Grant, put Eunan's 3-4 to 0-5 ahead.

Tiernan Higgins punched a cross-field ball to the net for a late Maghera goal but St Eunan's weren't finished. Once again full back Tobin went on a charge upfield and Monaghan grabbed the goal his play threatened.

In the final game of the group, Holy Trinity face St Patrick's Cavan on Thursday (6.00) on Clones' 4G pitch.

The top team qualifies for the McCormick Cup and an automatic MacRory quarter-final spot.

A win for Cavan would see them level on four points with Maghera and St Eunan's.  In this scenario, Maghera's score difference - currently +23 - should be enough to see them secure top spot.

A Cookstown win, would put Maghera and St Eunan's level on points, meaning the Letterkenny men would finish as group winners by virtue of head to head.