Young guns round off a highly successful year for Foreglen 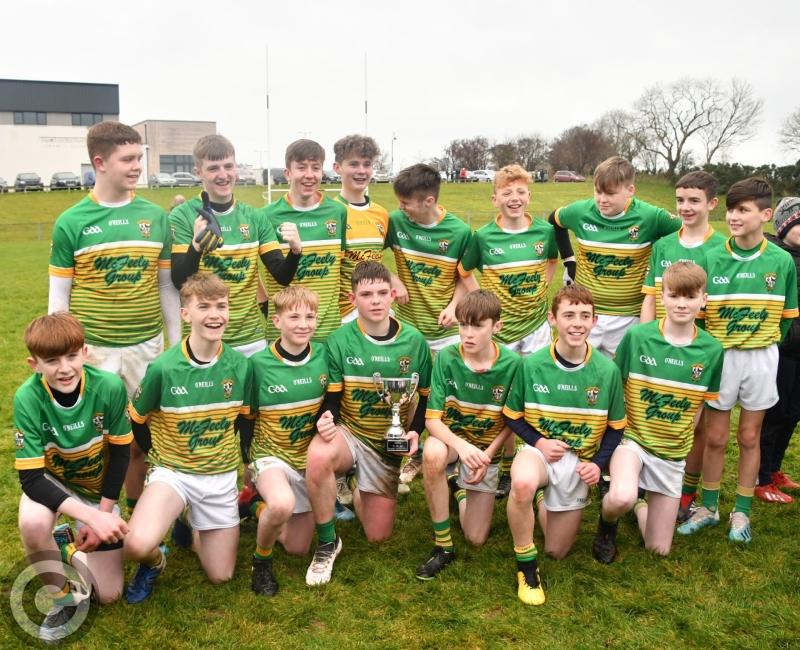 Foreglen completed the championship and league double with a five point success against Ballerin at freezing cold Banagher.

With dots of snow visible on the Sperrins the players battled through a hotly contested encounter with Foreglen worthy
winners.

It caps a great year for the club. Intermediate champions, U14 C league winners championship finalists and now the U16C double.

Remarkably all but one of Saturday’s winning team will be eligible for the U16 grade next year.

Five points in the first five minutes set the tone for Foreglen’s victory and while Ballerin did draw level they never really looked like finishing in front.

A lively first-half was followed by a scrappy second with too many stoppages and time wasting. With a seven point deficit to make up it was well nigh an impossible task but they did show resolve to close the gap to four ten minutes from the end.

A firm pitch which was slippery on top led to mistakes and mishandling but it was the winners who made least mistakes. Their half-back line was excellent with the trio of Paul Downey, Caolan O’Kane and Odhran Downey bottling up Ballerin attacks.

Shea Watson dominated midfield in a player of the match display and the lively Caimhin Hargan at full-forward gave the Ballerin defence a lot to think about. Half-forward Tiernan O’Connor showed skill and accuracy with five quality points.

Ballerin struggled to win kickouts from both ends against the sharper winners who stormed into an early five point lead. All too often the Ballerin players soloed the ball into a crowded defence and got turned over.

Ballerin lacked the cohesion of the winners but in goalie Adam Reid, centre half Peter Mullan, midfielder Ryan Doherty an half forward Conor Bradley they had very good footballers.

Foreglen’s accuracy in the conditions was commendable as they got to grips from the throw in. Ronan O’Connor, Caoimhin Hargan and Tiernan O’Connor had them three in front in as many minutes as Ballerin looked decidedly rusty.

Martin Brown with a brace of points, the second a superb effort from the left wing left the O’Brien’s five clear and some Ballerin
players hadn’t even touched the ball.

In their first attack Ryan Doherty set up the impressive Peter Mullan for a well taken point. In the seventh minute Ronan McCormick’s cross shot deceived the Foreglen defence and ended up in the net. The eighth score of the opening eight minutes fell to Ballerin’s Conor Bradley who levelled the game from a tight angle on the right to make the score 0-5 to 1-2.

Ballerin did not score again until ten minutes into the second-half. By that stage Foreglen had added another six points.
In the 12th minute Tiernan O’Connor a lively wing forward put Foreglen back in front.

After a blank spell Shea Watson converted a free after Ronan O’Connor was impeded. A brilliant point from Watson followed by Tiernan O’Connor’s 26th minute free left the winners five clear going in at half time. Prior to the whistle Ronan McCormick’s free came off a Foreglen upright and wide.

The second-half was a stop, start and free ridden affair with some players going do too easily.  The teams just adding three further points each in the half hour. Foreglen started where they left off with Caimhin Hargan dancing through to open up a six point lead on the restart.

After a Darren Robinson wide Ballerin had their best spell of the game. Ryan Doherty converted a free and than finished a long solo run with a fine point to leave four between the teams.

Ballerin kept pushing forward but they lacked cohesion in attack. Eleven minutes from the end Conor Bradley hit a superb point but that was soon cancelled out by a Tiernan O’Connor free.Both teams missed chances as tempers got frayed but Foreglen never really looked like getting caught.