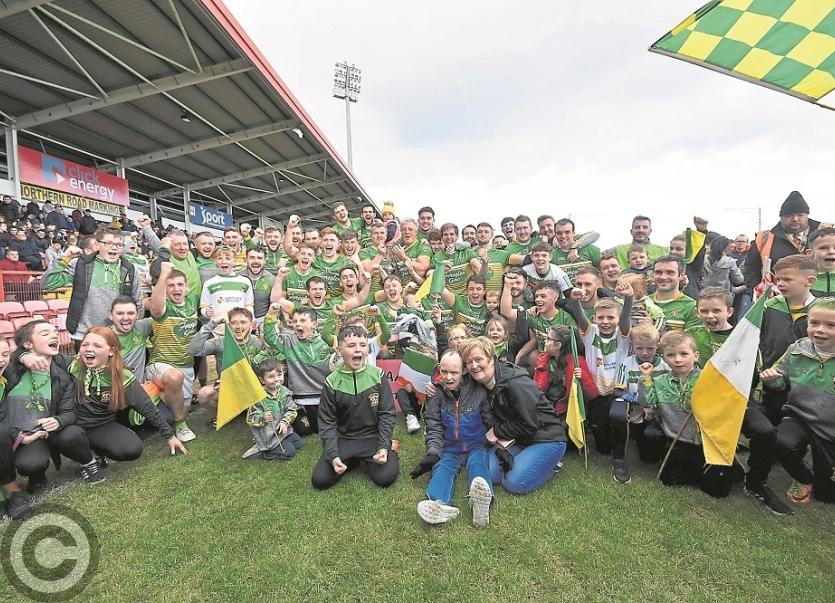 Foreglen will be back in action this weekend hoping for more reason to celebrate. (Pic: Mary K Burke)

Foreglen coach Philip Muldoon is happy for his team to take on the underdogs tag again as they prepare to face Monaghan champions Magheracloone on Sunday.
The O’Briens will travel to the lion’s den of Inniskeen full of confidence after making a mockery of the bookies and upsetting the odds to comprehensively defeat league champions and parish rivals Claudy in the championship final two weeks ago.
Their counterparts claimed county silverware the week previous, with a convincing performance of their own in a 2-17 to 1-12 victory against Donaghmoyne.
Foreglen’s opponents on Sunday come with an interesting back story. 13 months ago, a disused mine collapsed in the area where the club grounds were located. Two days later, two further sinkholes appeared, and a huge split broke the pitch in half and spread to the clubhouse and car park. The grounds were immediately shut down, and the misery was compounded a few weeks later when the club were relegated from senior football for the first time in 21 years.
This season they have made use of alternate venues as the work continues to re-establish their own home, with a GoFundMe page raising tens of thousands towards the project. The club – who have appeared in six of the last 15 Monaghan Senior Club Championship finals, with the most recent appearance in 2017 – have secured their position back in the senior ranks for next season, but first they must deal with the business of Ulster.
For Foreglen, it’s a familiar position. At the start of the Derry championship they were ranked as dark horses, but were few people’s out and out favourites. Bar a first round replay against Faughanvale they barely faltered on the way to the showpiece, but still there were few in their corner against Claudy. It mattered little as they held the Mitchel’s to one score – a free – in the second half to claim a 0-15 to 0-9 win. O’Brien’s coach Muldoon believes they can take serious confidence not just from the result, but from the nature of the performance.
“I think after the replay with Faughanvale, as the championship went on our confidence just got better and better and we’re going into this game now off the back of a big performance,” the Ballinderry man told the Derry Post. “My team talks are very brief before a game because we do the work in training. The boys know on the day what they have to do, who they’re marking, what the plan is for kick outs – it’s all organised.
“We’ll sit down this week and look at Magheracloone. There’s not a lot of information or videos out there but we’ll get our planning done and be ready for the challenge. It will probably be a case of giving it five or ten minutes and then making the switches that we need to.
“It’s bonus territory for us, and it’s unknown territory too. We know they’re going to be a very good, strong side and we’re expecting a tough challenge but it’s one that we’re all looking forward to.”
From the scenes on the pitch in Celtic Park after their victory two weeks ago to the social media posts from Foreglen clubhouse in the following days, the togetherness of the whole community has come to the fore. Even as a man not from the club, Muldoon said it was something special, and something they’d like to repay.
“After the final whistle I stood back and saw my two boys running onto the pitch in their Foreglen tops and I shed a tear. They’re a small parish, and I know a lot of them are the same, but in that clubhouse on the Sunday night, I’d never seen a crowd like it.
“We said to the lads last week that when it came to Ulster there was a choice to train a few times or put the heads down and give it a rattle. We want to set an example for the county and to be fair they’ve put the shoulder to the wheel for their community.
“It’s a day out for everyone to jump on a bus together and head down. Who knows what’s going to happen, but we’ll all be sticking together as a team and with the supporters and we’ll give it everything for them.”

FORGET ODDS
Despite all their difficulties last year, Magheracloone still managed to reach the senior championship semi-final, defeated by eventual title winners Scotstown. The enormity of the task at hand isn’t lost on Muldoon, but he insisted that the underdog tag hasn’t been an issue for his men so far – they’re relishing it.
“We’ve been happy enough to take the underdogs tag. Before the Claudy game there were a lot of people who thought we had no chance, but we didn’t care,” he insisted. “The boys all got it out of their heads and we focused on ourselves.
“To be fair, Claudy were rightly favourites because they were head and shoulders above anyone in the league, but we knew what we were about and we knew what we were doing. The whole favourites thing is all part of the build-up, but we won’t read too much into it this time either.”
Both played five championship matches on their way to their provincial titles, with the Monaghan side both scoring (11-81) and conceding (6-61) more than Foreglen, who scored 5-69 and conceded 4-42. Even with county level players like Gavin Doogan and Tomas Freeman on the other side, Muldoon reiterated his faith in the O’Brien’s defence, and he feels the forward line can take confidence knowing that they will get opportunities.
“In training and in all our games we have the same set up – it’s man to man marking, no sweepers and no hiding places, and we’ve no plans to change that,” explained the coach. “In the build-up to the final nobody was giving our defence any credit, it was all about the Claudy forwards, and vice versa about our attack.
“Our defence is tight, the boys talk to one another, you have the likes of Oisin and Shane Duffy in there and they’re all told what to be doing before the game. Them boys don’t have the cover of a sweeper, but they do their job, they back themselves against their man and they have confidence as a unit.”
For the seasoned professionals like Oisin Duffy, Mark McCormick and Kevin O’Connor, the pressure of an Ulster quarter-final won’t weigh too heavy on the shoulders, but Muldoon said he is particularly delighted that the younger squad members, like Liam O’Hara, Sean, Cahir and Caolan O’Connor, have all shown that they can handle the mental pressure of the big occasion. It’s a quality he feels will stand them in good stead come Sunday afternoon.
“I sat down on the Saturday night before the game with Claudy and rang some of them young lads and said to them that I knew what they were feeling, and they’d got us there through talent and enthusiasm. They worked hard all year in the gym, but they had to go out and treat it as any other game,” he explained. “In fairness to them they did, and I thought every one of them were immense.
“Now getting the chance to play in Ulster – it’s a brilliant experience for them young cubs and it’s one that will definitely stand to them.”