The Shamrocks dominate underage football in Derry through the 1990s 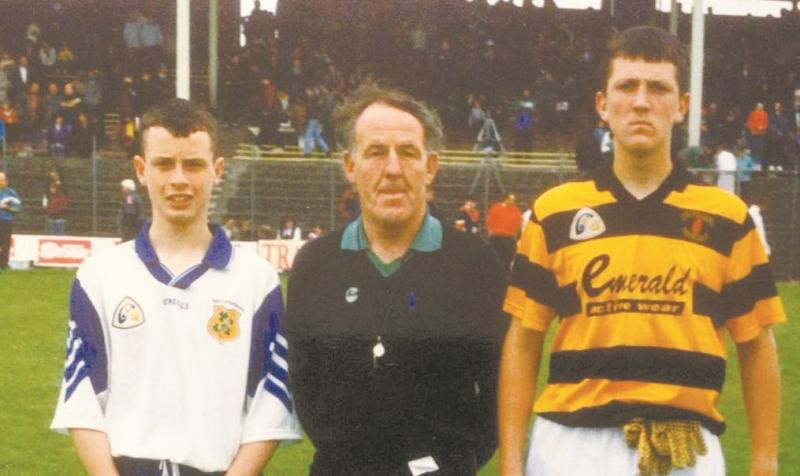 Twenty years ago this weekend, Ballinderry’s Stephen Scullion was in a privileged position. Ballinderry’s U14’s had just swatted Cork’s Na Pairsaigh aside with consummate ease to land the All-Ireland Féile title - and ‘Burler’ was the captain.

That afternoon in Castlebar’s McHale Park was both the culmination of years of youth development and the springboard for the Shamrocks juggernaut to dominate at senior level.

It was the first part of a double. Twelve months later the Shamrocks retained their title and Thomas Maynes was the skipper. Maynes was a magician with the ball and epitomised their swashbuckling brand of football.

Maynes’ son Thomas Shea won a Féile two years ago – but in the red of Magherafelt. With the school term approaching to a joyous conclusion, Friday will see a mass exodus from Magherafelt, Castledawson and Ballymaguigan.

Like the camogs and hurlers last weekend, they head down the M7 – Munster bound with dreams of All-Ireland glory and bucket loads of memories. 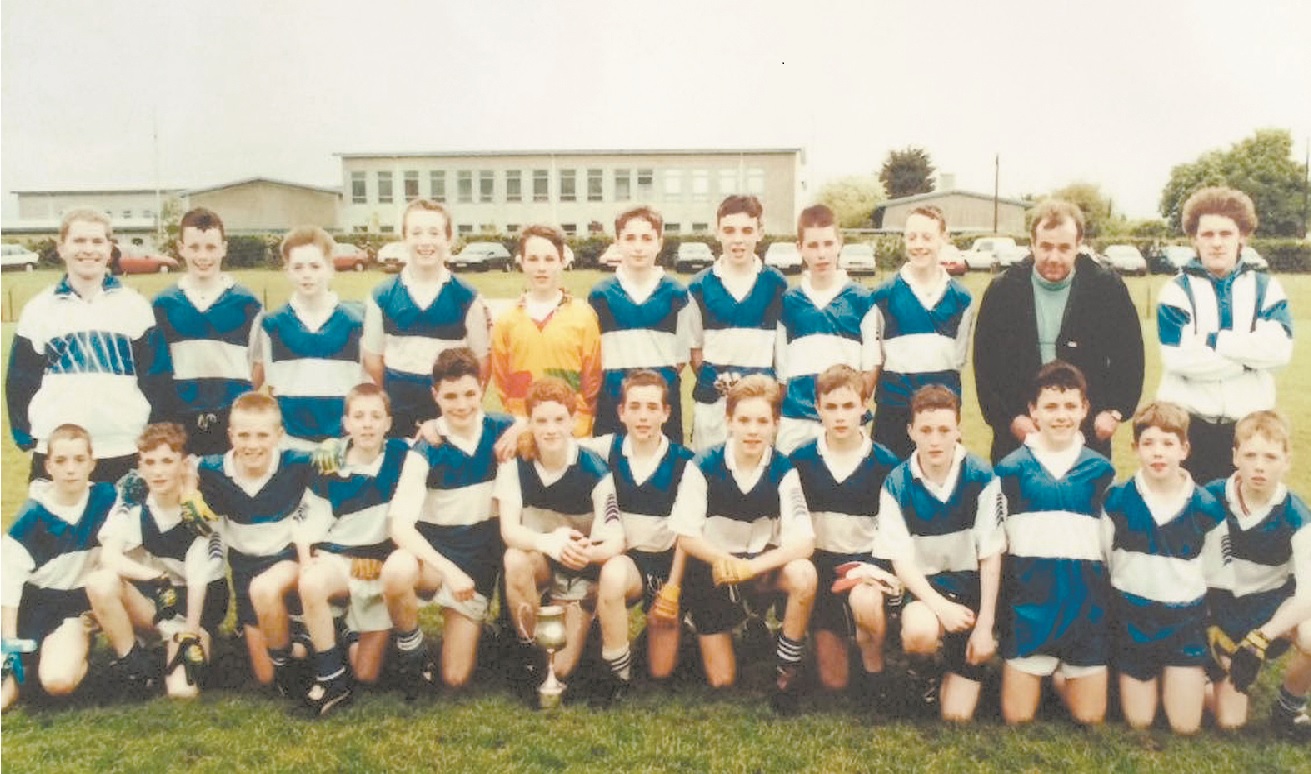 Two decades after Kevin Collins’ all conquering squad ‘brought home the bacon’, we caught up with Ballinderry’s Killian Conlan to rekindle the Féile experiences – memories that have stood the test of time.

In a 17 year spell, the Derry Féile crown rested on the banks of the Ballinderry River 11 times – nine of those in a dominant spell in the 1990s.

The national Féile experience unites communities. Table quizzes, guess the score and sponsored car washes. All vital to raise funds – travel doesn’t come cheap but the families all pull together for the greater good. That’s what elevates the GAA community above any other organisation - togetherness.

On ‘Féile Friday’ the convoy sets off, players and parents alike, living out of each other’s pockets for the weekend. In today’s modern society, nobody has time or space to socialise – even next door neighbours.

Conlan’s Féile story sounds more like a bus timetable than anything else. Galway, Meath, Kerry, Mayo, Donegal, Clare, Dublin, Wicklow and Tyrone - the four corners of Ireland. It was a perfect dress rehearsal for the ultimate Ballinderry trip of destiny – the Trip to Tipp in 2002. This time it wasn’t summer, it was a more iconic time of the year.

“Féile has lots of special memories for me. It's a real family, club and community experience. I will always remember special journeys with my mum driving all over the country. The last weekend in June was all about Féile - it was our annual holiday,” outlined Conlan.

Watching on with envy in Castlebar as Ballinderry went to town on the Rebel champions was Conlan - overage and merely a spectator.

“My team was in 1995. After beating Magherafelt, Glenullin and Ballinascreen, we travelled to Ballina in County Mayo.

“We lost out on score difference so that was disappointing as we were undefeated. The younger players on this panel used the experience and went on to win the next two All-Irelands.”

There was no secret to this underage dominance.

“It was just a winning mentality and unbelievably hard work from coaches, parents and players combined. I can remember the hard running and the punt passing drills and lots of in-house games.”

Educated, rehearsed and primed in the basics of the game from U10 and U12 level, the young Shamrocks ‘couldn’t wait’ for the next step – U14 and lure of a crusade to some far flung corner of Ireland to pit themselves against the cream of other counties.

For Conlan the seed had been planted. Football was and still is ingrained deep in his DNA. The Ballinderry production line had given him so many positive and memorable experiences. It was his turn to put something back.

In an interview last week, Everton and Ireland star Seamus Coleman spoke about life back in Killybegs, playing on his local pitch, catching up with the locals. Someday he will swap his lifestyle in soccer stardom to move back home.

On Slaughtneil’s injury list is Gerald Bradley. Looking over the wire as his team-mates fly the flag in his absence, he doesn’t feel sorry for himself. If he does, well he doesn’t show it. If he is not at the gym following a rehab programme, he is coaching the U14 hurlers.

Conlan has also decided to put something back. Most fathers get involved when their children start playing. The Ballinderry man is now helping coach his sons Dan and Senan in the underage ranks but he has been ‘paying back’ long before now.

“Paul McIver got me involved in coaching and it was with him we won the Féile twice and qualified for Strabane (2004) and Kilcoole (Wicklow) in 2006.

“I have great memories of those two teams, remembering those no longer with us.” Conlan’s uncle Martin McGeehan was in the management and Aaron Devlin was pulling the strings on the pitch.

“This was a special group of players who went on to win U14, U16, Minor, U21 and senior championships including two Ulster clubs at minor and senior level.

“I got involved in coaching because I love it, working with players of all ages.” For 15 years Conlan has been involved in various teams from U6 to senior level.

“I love to help people improve and always felt I could offer more in this environment than an actual playing one. It's all about learning adapting and trying new things with real enthusiasm.”

What was the difference in winning the Féile as a player and as a coach? Conlan can tell us.

“As a player it was so exciting as you had all the new gear, the journey, the opportunity to make new friends and also the challenge of playing the best teams.

“As a coach it was very similar but what made it special was that you could share with the players, experiences of past Féiles and tell them what to expect and to enjoy the memories as it would last forever. I loved the buzz of organising and the overall build up.”

This week will be a busy one for the Féile Officers in Castledawson, Ballymaguigan and Magherafelt. There will be checklists, crosschecks and the concern of overlooking something. Finalising pen pic information, checking the gear and ensuring the transport arrangements are in place.

Conlan was also that soldier. He didn’t mind the role. Again he had been at the receiving end of it and it was his time to give back.

“I was Féile Officer for 2010 and 2013 and it was great to host Féile in Derry and in Ballinderry we welcomed Sarsfields of Kildare and Michael Davitts of Carlow.

“It was great to be able to give these clubs the hospitality that we received in all the places that we travelled. Some of the families regularly keep in touch which is great and within the Féile ethos.”

This ethos isn’t always upheld. An alarming trend is the level of expectation at U14 level and as Conlan explains, some clubs are taking it a step too far. Prepare well – yes, but to what extent? When is it time to stop. It’s U14s after all.

“In Wicklow 2006 we really got our eyes opened as to how serious the Southern teams and in particular Dublin were in their preparation. We travelled to Kilcoole on Friday morning – a three hour bus journey.

“We got off the bus and an hour later played Kilmacud Crokes. They won by two points, afterwards we found out they (Kilmacud) had stayed the night before, they had diet sheets, they had masseurs and physios and also a curfew for bedtime.”

Reports from the Féile in Derry in recent years tell of a club issuing diet sheets to the host club, disrespectful of the host families. Once the coaches’ backs were turned the lads were standing in a queue at the burger van.

Surely at this level enjoyment and development of the basic skills should be the only success criteria of an U14 manager.

When prompted how the coaching should evolve in the modern game, Conlan explains.

“I think youth coaches must continue with perfecting the basic skills with players to adapt and to compete with today's game.

“We can be teaching players running techniques, calling on specific conditioning coaches who can help with increasing speed levels. I think players who can run, have the right attitude and have perfected the basic skills then they can adapt to whatever way our game changes.

“I think we can also help as coaches promoting positive body language, using mental preparation and visualisation techniques as to what is expected.”

BACK TO THE TOP

After a lull at underage, Ballinderry are once again back at the top of the tree, with their current U14s back playing in the top grade.

There has been a lull but even in grade B, they have unearthed a long term replacement for Mickey Conlan – in Ben McKinless. Oisin Duffin has represented Derry and minor and U21 level. Conlan is happy with what he is seeing at the moment.

“It's great to see our U14s doing so well at the moment. It’s a credit to all the current coaches working with them and those who have worked with him since P1.

“We went through a tough spell in recent years with low numbers but thankfully that's on the rise again.

“On Sunday mornings we have over 100 kids at youth training - all in their new Ballinderry jerseys. It's all about getting the right coaches in charge of the different teams. With improving numbers, improving facilities and the current excitement of the Aaron Devlin skills wall it really is a great time for our club.”

The U14 batch from the mid-1990s are all present. Conlan is doing his bit, so too is Scullion among others. All under the leadership of Adrian McGuckin Junior, the man who carried the Andy Merrigan Cup over the Ballinderry bridge back in 2002. The apple doesn’t fall far from the tree with traits of his father Adrian engrained in him.

This weekend it’s the turn of the girls from the ‘Quigan, the boys of Castledawson and Magherafelt. Times cannot get any better – a weekend away playing football with your best friends and the school bell almost ready to toll for the last time. Bliss.