FEATURE: Dungiven woman shares her story of loss and infertility in new book 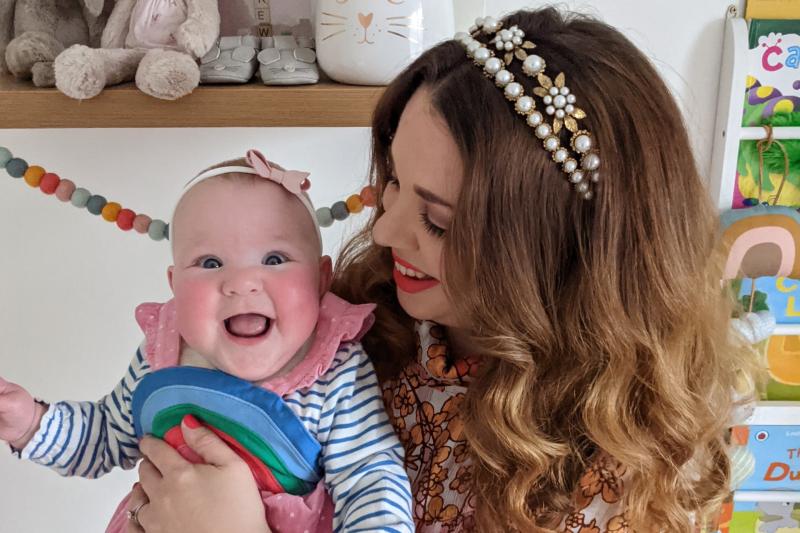 Aideen McCanny and husband Andrew have just had their 20-week scan when I speak to her. It's an emotional moment.

When the couple got the news in January that they were pregnant naturally, it gave rise to a host of mixed emotions.

“It was completely unexpected, just a massive shock,” said Aideen.

“Because our case was so extreme, and it had taken so many rounds of IVF as well, you don't think it will happen naturally.

“For a few days we were just looking at each other laughing, we couldn't get our heads around it at all and it was so surreal.

“I think making the decision to have another baby when you've lost one is such a difficult one, but it's amazing Lucia will have a sibling so close in age after everything that has happened.” 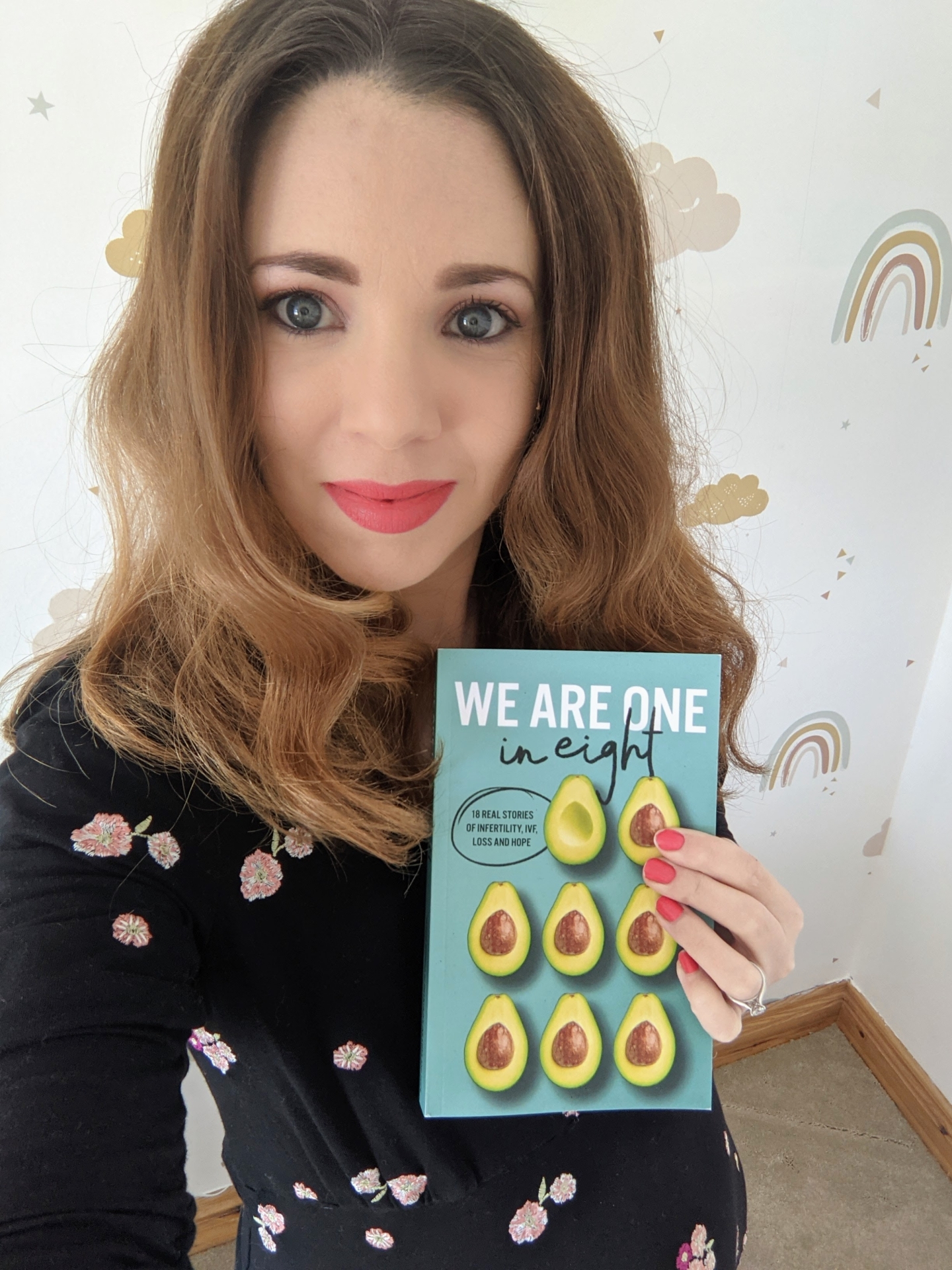 Aideen pictured with the new book in which the family's story features.

And a lot has happened. So much that Aideen and Andrew's story features in a new book that shares the honest stories of infertility.

'We Are One in Eight' by Lauren Algeo, charts the experiences of 18 different women with infertility and IVF treatment.

Aideen and Andrew's story is typical of those featured in the book, in that none of them are straightforward success stories.

“It took us over five years and seven rounds of IVF,” said Aideen.

“We actually went to England in the middle of it for more testing, and that all came back normal. They couldn't find anything wrong with either of us, so we were labelled 'unexplained infertility'.

“We took a break to save for it, and approached the Belfast Fertility Clinic. They were a wee bit more willing to look at what had happened before and were able to make suggestions for changes.

“We went through another egg collection and I think I ended up with 18 eggs, and from that we ended up with only two embryos, which is quite a big drop off.

“They suggested poor egg quality was a factor. I'd spent years wanting to know what the issue was, and then when I found out, I was devastated.” 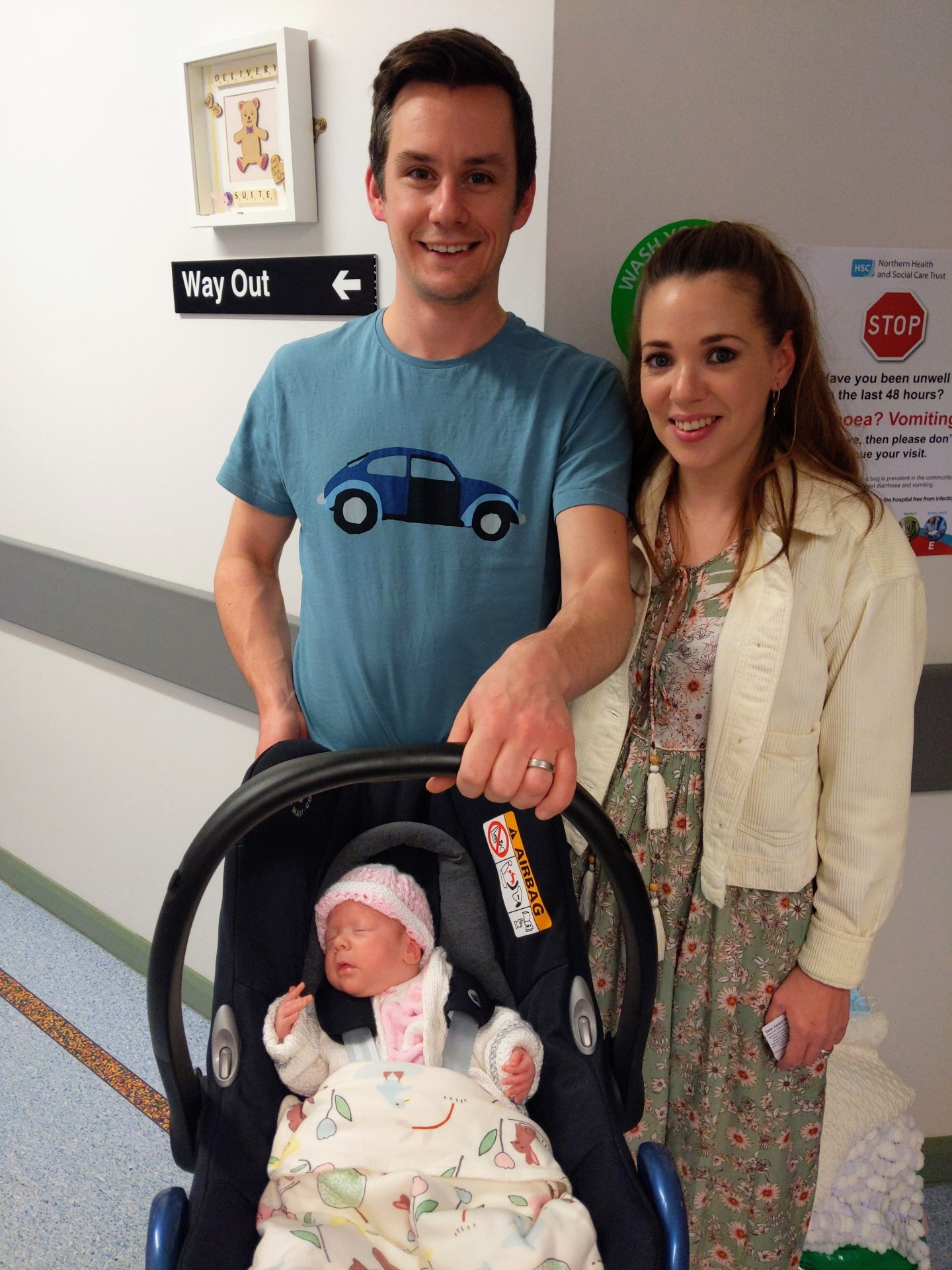 The couple were forced to pause the process again after Aideen developed ovarian hyper-stimulation syndrome (OHSS), but after resuming, the clinic suggested they try a different approach.

“We had six embryos, and in my head it was not going to work. I didn't know how I was going to go through another six individual transfers and have the same outcome.

“They suggested transferring two, and we were both really happy with the decision. Nobody really said anything about risks of multiple pregnancy.”

Aideen started to become unwell around 28 weeks into the pregnancy, and after developing cholestasis, the hospital began to monitor her more frequently.

One of the tests flagged up acute kidney failure and she was asked to come back to the hospital the following day, but the schedule was soon to be taken out of her hands.

“I was getting ready to go into the hospital when my waters broke,” she said.

“Andrew was on call, this was at the height of Covid, and I was also worried about driving, so I phoned Andrew's mum.

“I remember her dropping me off at the pedestrian crossing and walking in thinking 'I can't believe I have to do this on my own'.

“In my head I was just going to go in and they were going to delay labour, but I was examined and brought up to the delivery suite. 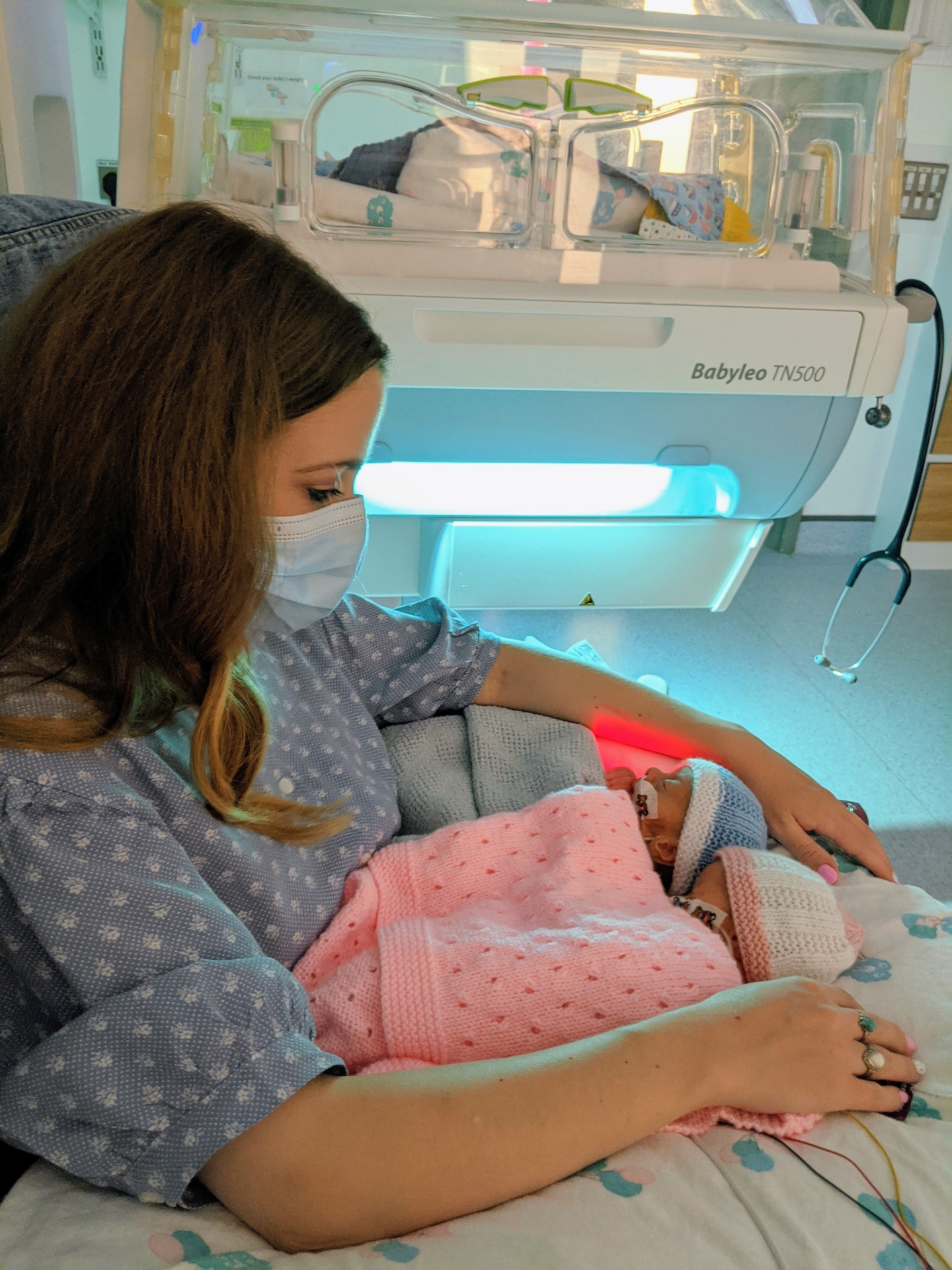 Aideen with Lucia and Eoin in the hospital.

After they were born, Eoin and Lucia had been transferred to the newborn intensive care unit (NICU), but were moved to high dependency after a few days, a positive step.

The twins were then moved to Antrim Area Hospital, and the initial signs were good.

“Everyone was happy with the two of them – it was about getting them off breathing support and fed to put on weight,” said Aideen.

“They were both off everything, being fed milk and things were going fine. I was sitting with both of them on my knee.

“I just didn't feel right about him, and one of the nurses said he looked really pale compared to Lucia. I asked them to put him back in the incubator, because I wasn't comfortable.

“He started blood tests and all the rest and they realised he had an infection. Over the course of a couple of weeks, he'd started to get better and was back on feeds.”

Unfortunately, the improvement in Eoin's condition did not last, and the couple were called into hospital to allow him to undergo surgery after an infection was discovered.

“Andrew was back at work, but when I came in and saw Eoin, I just knew it wasn't good. One of the nurses phoned him, got him out of work and he didn't go back for six months after that.

“We moved to the Royal and Eoin had two surgeries. They found he had a bowel infection but the first time they opened him up, they were leaving it to see how things would go.

“He'd become really unwell in between, but they went back in about a week later and the infection had completely taken over his bowel.

“The consultant said he couldn't believe that he had lived so long. 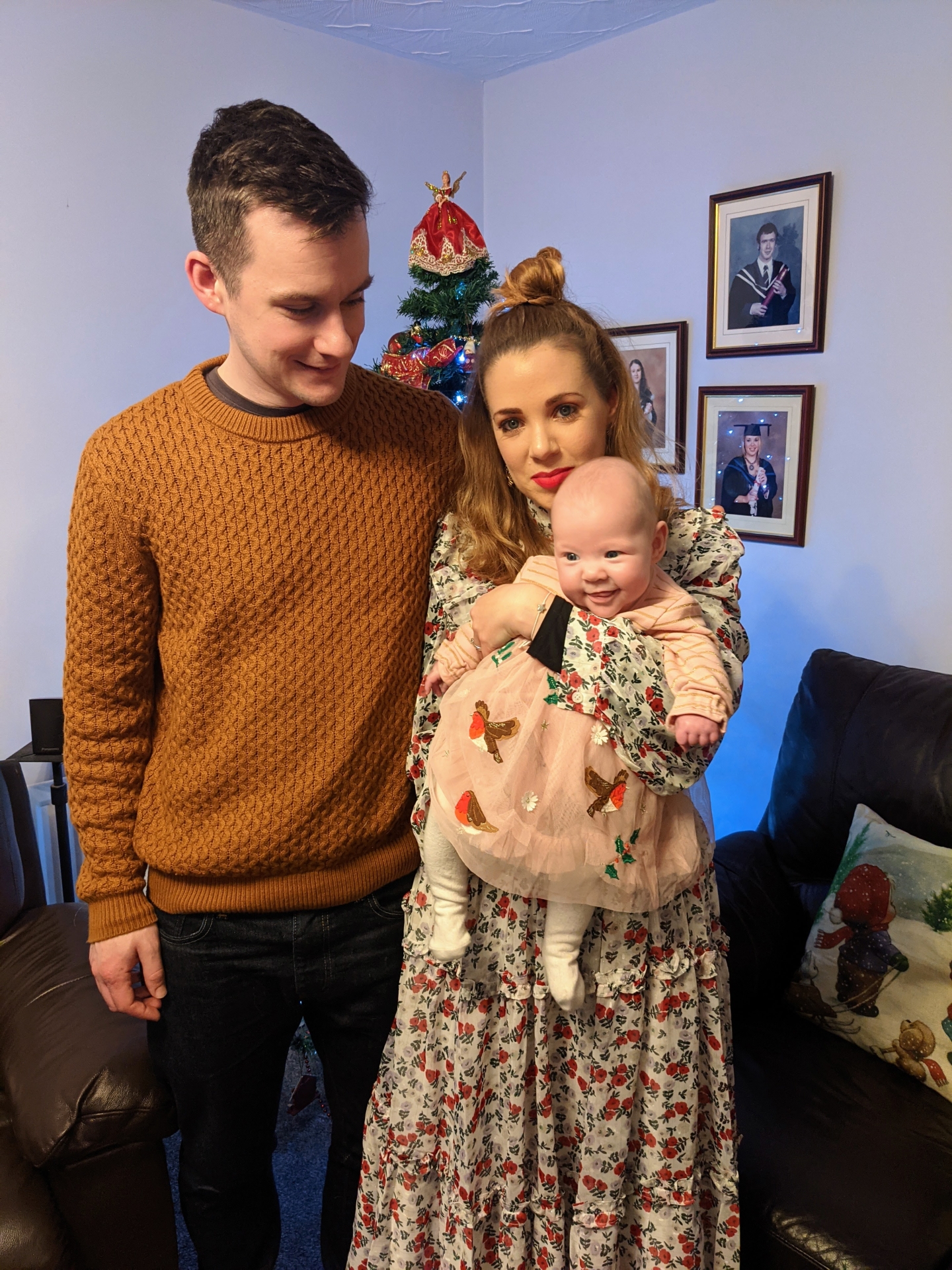 “We were then faced with the decision and had decided we'd stop all support, but the day it was supposed to happen, he passed away himself that morning.”

Aideen and Andrew were now in a position where they were grieving Eoin while trying to look after Lucia, a situation Aideen says was incredibly difficult.

“They were in two different hospitals. Eoin was so sick, but we were trying to establish feeding with Lucia in another hospital,” she said.

“She was so close to coming home and I knew that by not being in the hospital with her, I was delaying her getting out. You just didn't know what to do.

“There were days we just couldn't go and see Lucia, or we were going up at 10, 11 o'clock at night and the nurses were telling us to go home and go to bed.

“That was so hard, because we were so torn. We were in two separate rooms in the hospital and you felt bad if you were sitting with one baby longer than the other.

“At the end, they transferred Lucia and they had a few days where they could be together. We put her in the incubator with him and got some really nice photos of them both.”

During the course of IVF treatment, Aideen had started an Instagram account – ivfmumblings – in an effort to connect to women who had been through multiple cycles. 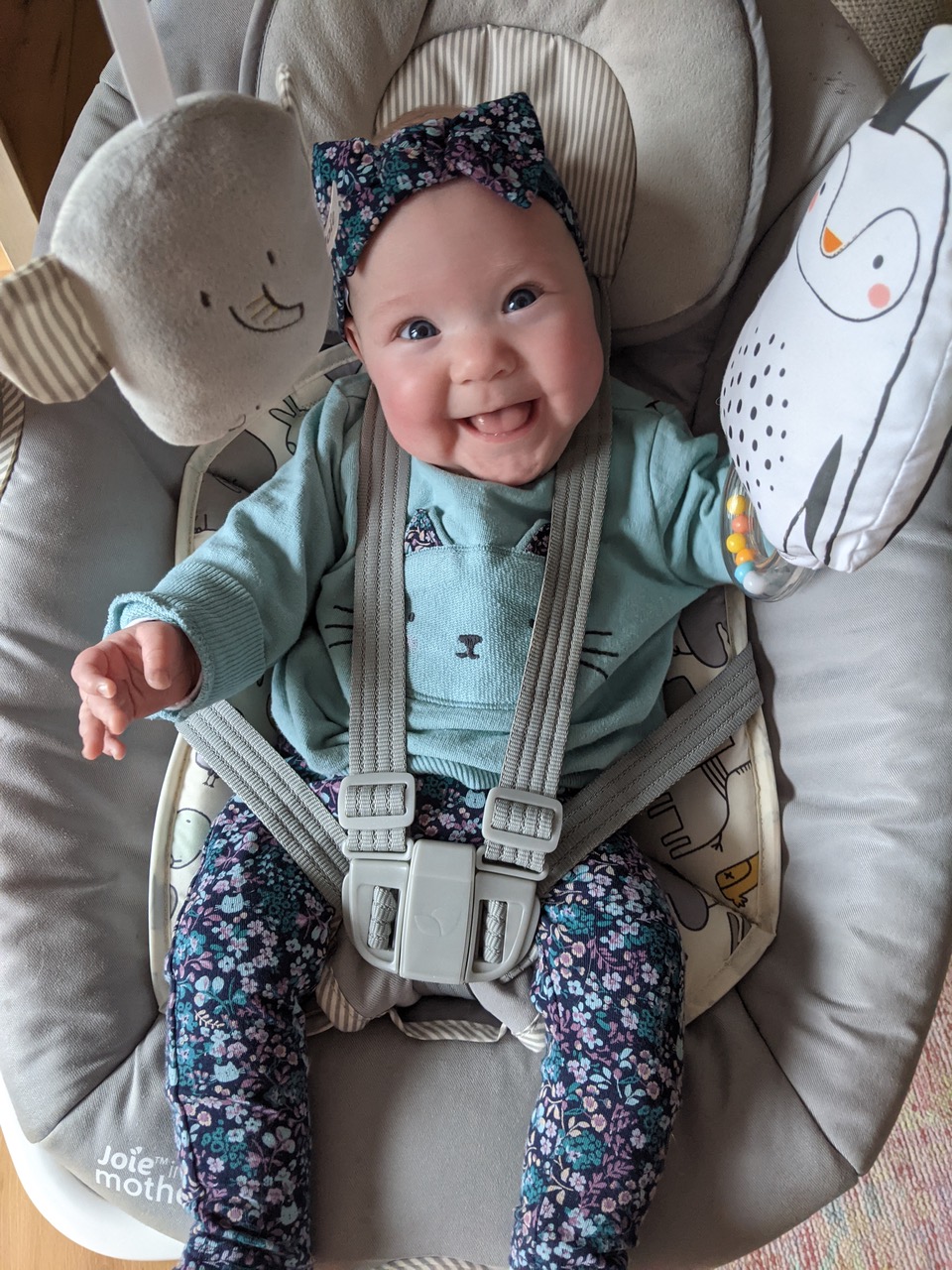 ALL SMILES: Lucia is thriving.

It was through the account that author Lauren Algeo first got in touch about the book.

“There was no doubt in my mind it was the right thing to do. It was really therapeutic for me to write it all down, because I was still dealing with baby loss,” said Aideen.

“What I liked was that our story wasn't straightforward, and there a lot of women out there who don't have the success of one IVF cycle.

“It's been helpful for me from a healing perspective and I've passed it on to a few friends who have had IVF.

“My mum was telling me that apparently the GP in Dungiven is reading it, because he thinks it will be helpful for him with patients, which is really good.

“The whole point is to help other people and give them that hope. We were at the point where I thought it was never going to work, and it will give hope to other people out there as well.”

Each woman featured in the book has chosen a charity to which a percentage of the sales will be donated, with Aideen choosing Tiny Life to benefit from her sharing her story.

With the 20-week scan complete, Aideen and Andrew will be busy with the anxious excitement of pregnancy.

Aideen is due to give birth to a baby boy later this year.

'We Are One in Eight' is available to buy now in both paperback and Kindle form.

We spoke to four local families who bravely told us their stories.

During Baby Loss Awareness Week, a number of bereaved parents from Derry speak to Liam Tunney about how their loss has affected them and how the stubborn stigma that surrounds the issue is gradually being eroded. 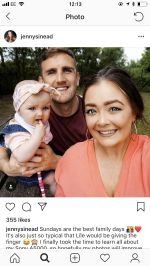