The town is biding its time until lockdown restrictions are lifted. 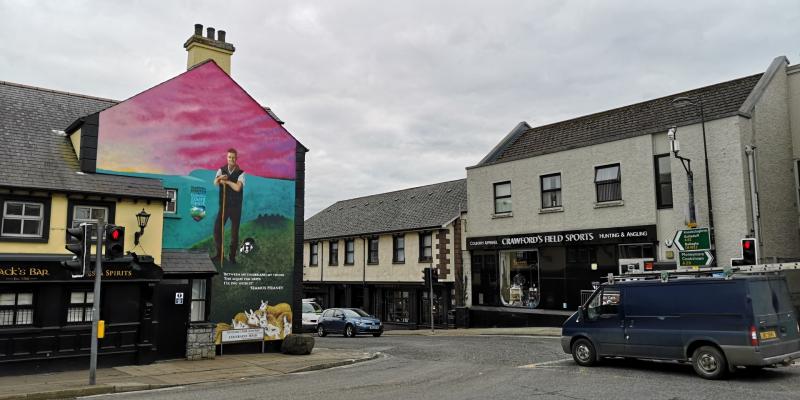 Despite the unorthodoxy of the environment that has dogged the world for over a year, there is a comfortingly familiar sight in Maghera.

The red glow of tail lights shepherds motorists down Coleraine Road to the traffic lights, the sound of their engines reverberating off the closed shutters of Walsh's Hotel.

A khaki-clad mannequin stares ominously from the window of Crawford Field Sports, a silent sentry keeping watch on the crossroads.

Through the filter of early Spring, you'd be forgiven for thinking normality had returned. The sight of a woman rushing across the road, face visor steaming up with the effort, shatters the mirage.

Crows cackle in the trees above the Walled Garden and the smell of freshly slurried fields attacks the senses on the way through. 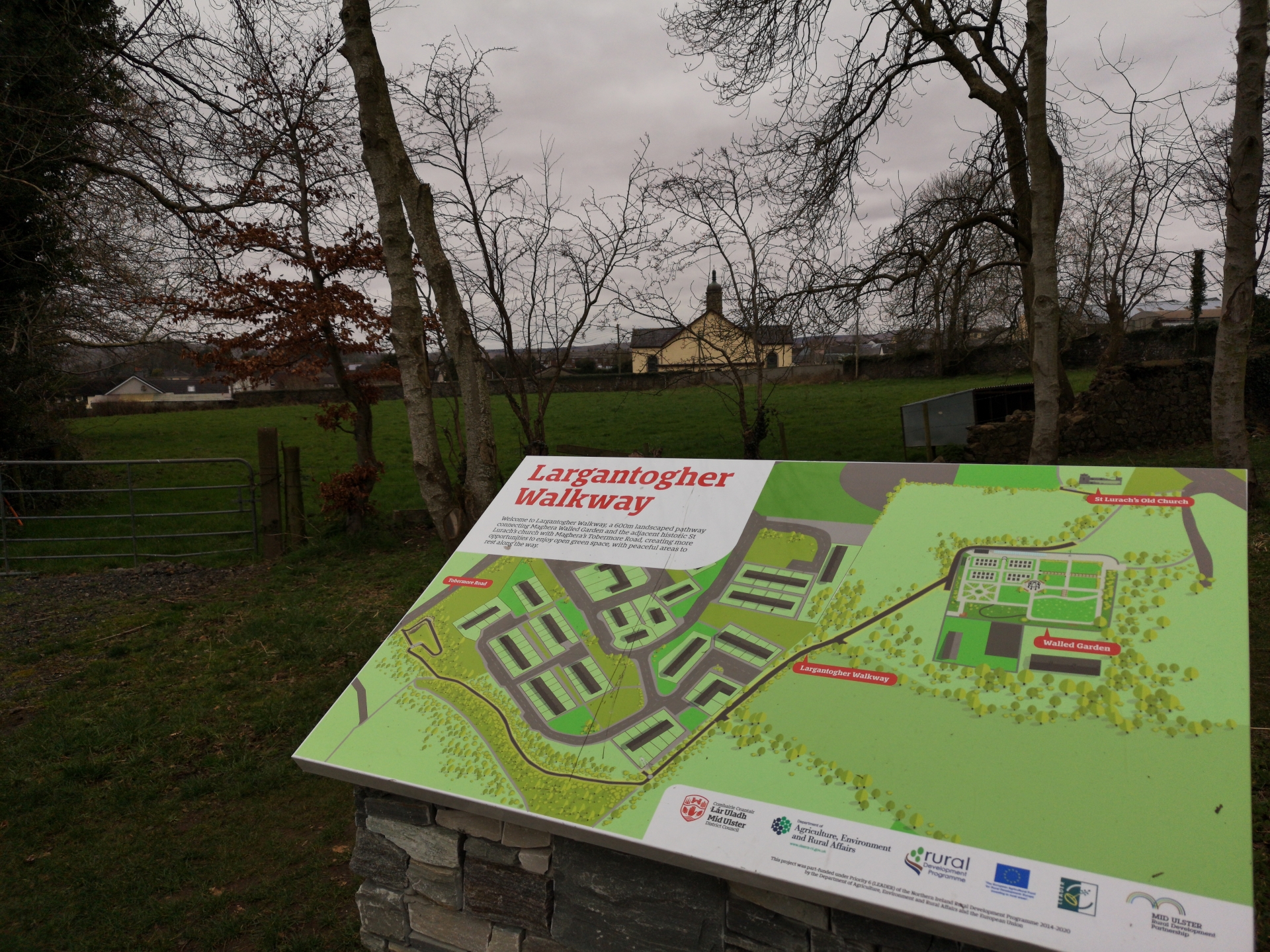 The Largantogher Walkway cuts through the town.

Through the dense trees lies the disputed Maghera High School site, ground zero in a long-running battle between the council and a local environmental group over its new purpose.

Planning permission for an industrial park has been granted, but Infrastructure Minister Nichola Mallon is set to have the final say.

As if to underline the point, a council van sits outside the gate. 'Keep Out' notices are festooned along the length of the fence. On the corner, two metal slats have been prised off for access.

On the way back up the Tobermore Road, two children come down on their bikes, their mum running alongside them. A treat on the final day of homeschooling, perhaps.

Back on Main Street, tattered Slaughtneil flags hang outside the Dugout Bar, clinging on in defiance as it continues to wait for a reopening commitment.

Two men in caps are chatting outside Kelly's Eurospar. A woman opens the door of the pharmacy across the road and calls out. She wants to know if he's going in for the paper.

The chapel and Fairhill Youth Centre are deserted, but at Crawfordsburn four children move in tandem on the swings.

Two teenage girls walk down Glenview, eating from a bag of chips. It's a case of small mercies for the young amid the pandemic. 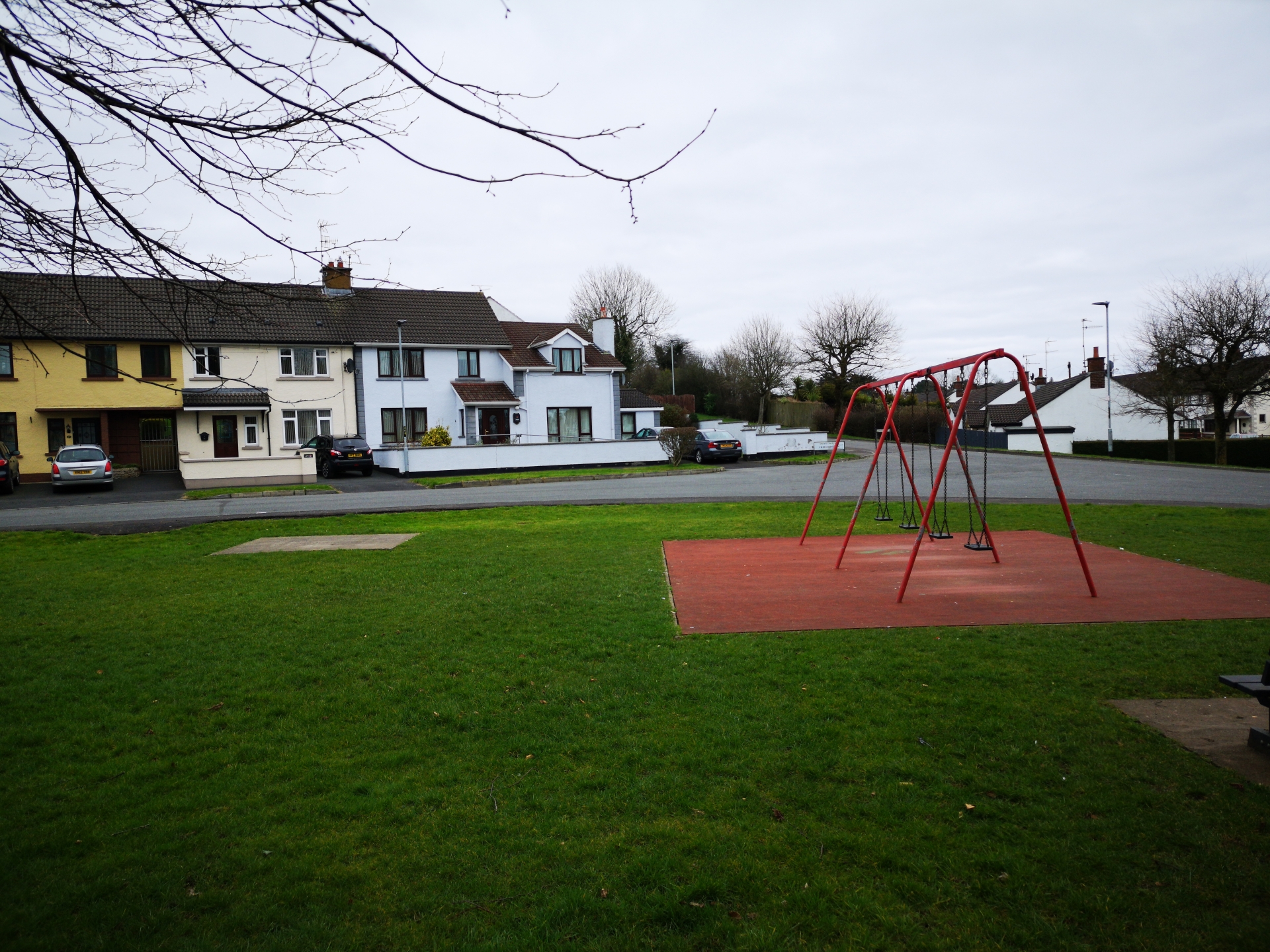 An empty playground at Crawfordsburn. Children have been hit hard by the pandemic.

A mounted sign at the entrance to Crawfordsburn Drive urges 'Solidarity with Palestine'. Across the road, a more understated sign from Watty Graham's GAC urges people to take home their rubbish.

On the way back in the road, the play park is once again deserted. Neither young nor old are hanging around too long these days.

At the corner of Fairhill, McKenna's Bar is operating their off licence, and doing a brisk Friday afternoon trade.

A table cordoning off the entrance and a screen that drops down from the ceiling bring a sobering reality to the scene.

Caitlín McKenna is actually reading the Derry Post as I arrive and says it might be the first time she's given us her real name.

She's referring to the 'Out and About' pictures, smiling revellers appeasing the photographer for a two-page spread that is sadly no longer a possibility. For now.

Caitlín, Caoimhe, and owner Sean McKenna, are all pining for those better days.

“Last summer was good craic out in the beer garden,” says Caitlín.

“We'd always had that space but we revamped it a good bit to make more use of it. Even people who knew it was there were surprised at how big it was when it was overhauled.

“It's been a big change, serving people through the hatch and not letting anybody in. You'd have been used to people around the bar a lot of the time,” adds Sean. 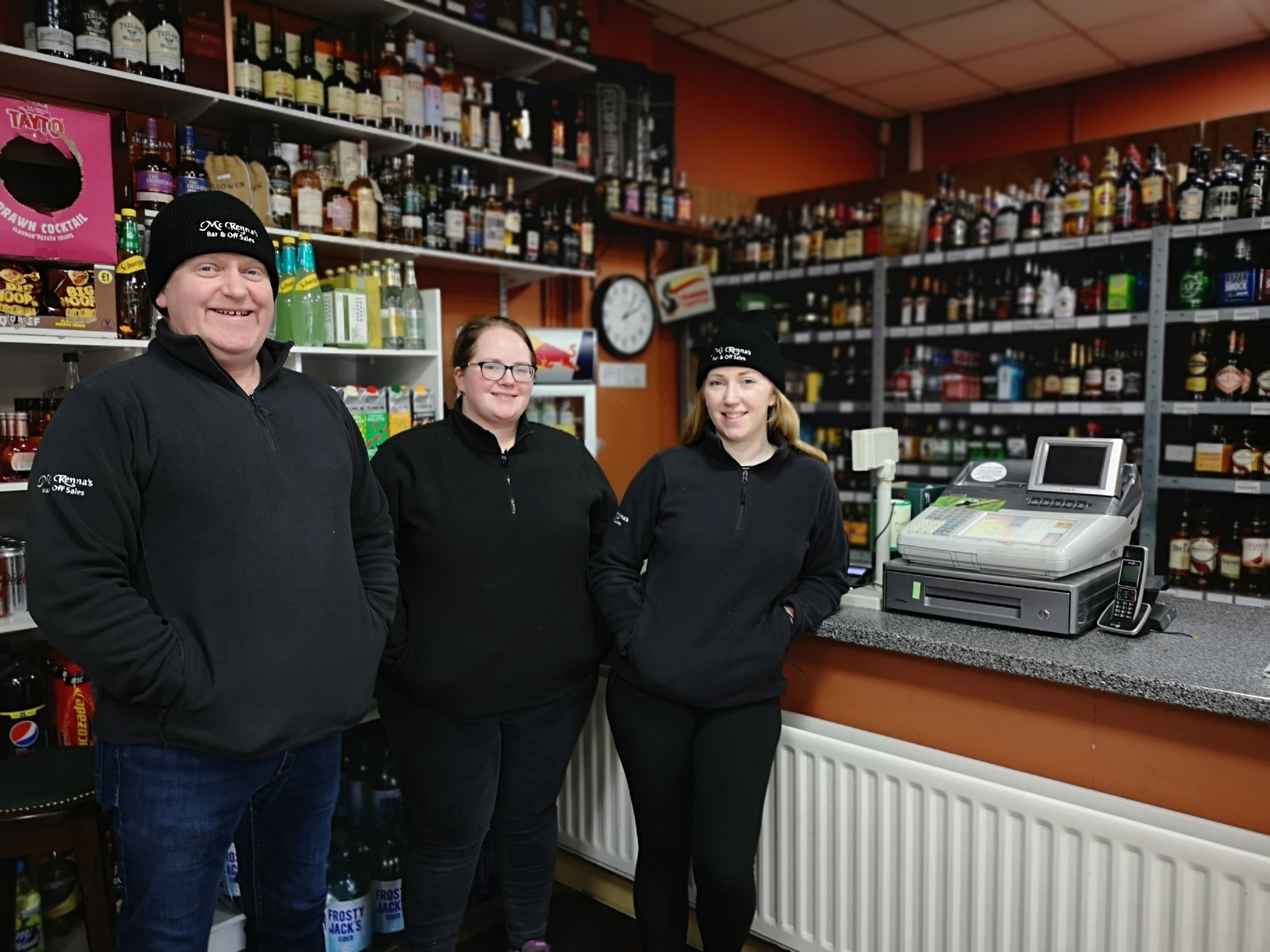 “This is a social hub, you'd have had people in and out all the time, whereas out there, though they may be some of the same people from the bar, they're only staying for a minute and away they go again.

“Another change is I'm sitting at home on a Friday or Saturday night from 8 o'clock thinking I should be doing something.”

The flow of customers interrupts our chat. People finishing up work for the weekend, some calling in on a whim, others a more regular sight.

Caoimhe tells me it has been hard on those regulars for whom the pub is very much an arena for conversation.

“You do get some who will stand and have a wee chat, because it's maybe their only social interaction,” she says.

“It's been a while since they've seen some people, so you get a wee bit of gossip out there that you miss out on having the bar closed.

“Then when it gets to 8 o'clock, it's mad out there, just before closing. Everybody ends up having a chat with each other at the hatch.

“They're more likely to meet someone they know then. You also get a lot of people waving in while they are out for their exercise as well.” 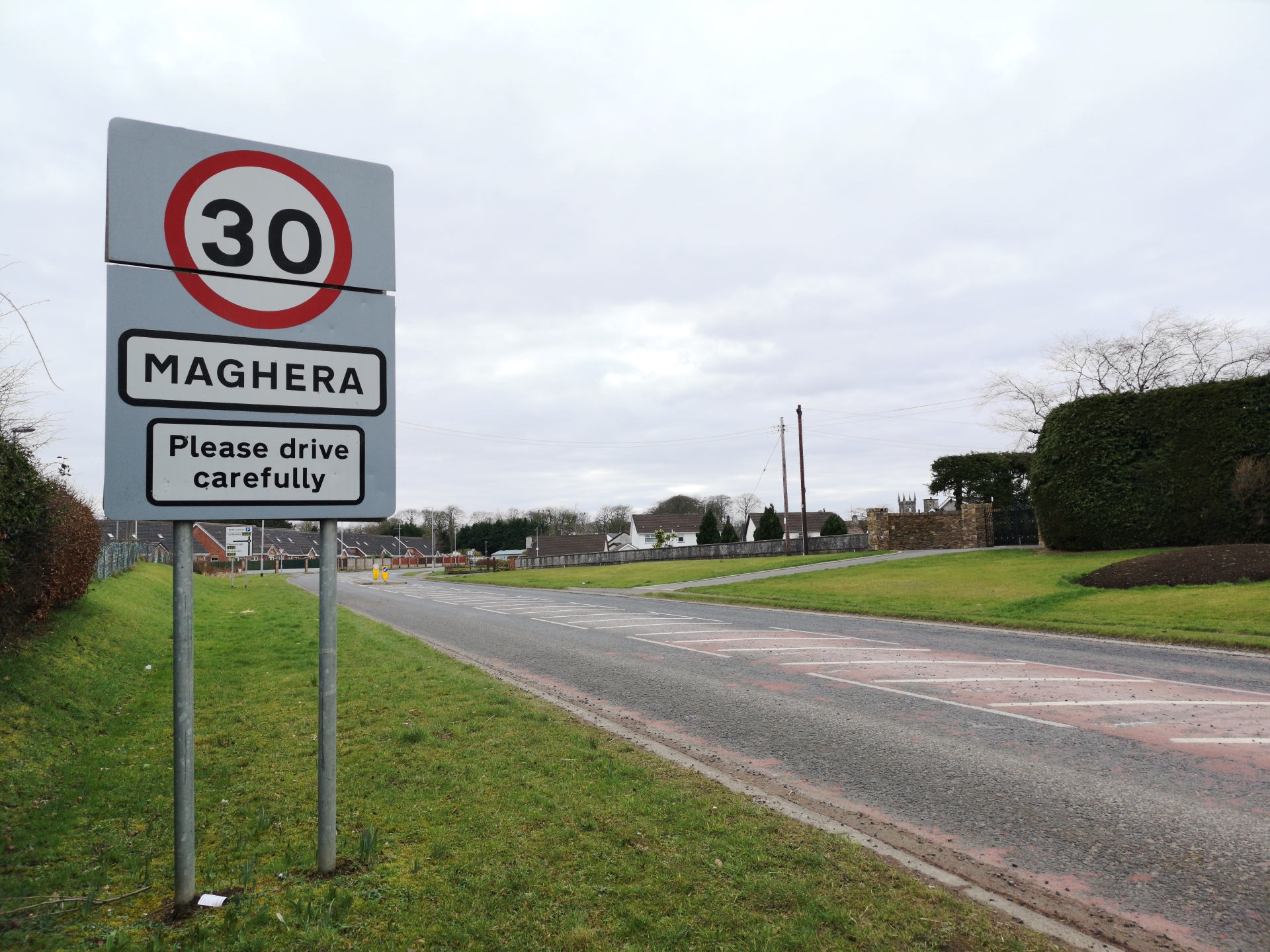 We mention the general differences between the current period of restrictions and the previous lockdowns, but it's interesting to view them through the lens of the pub owners.

“People aren't buying as much drink as they were the first time round,” says Caoimhe.

“The weather isn't the same and people can't sit outside in their gardens at the minute. It was a novelty, and people were almost treating it like a holiday.

“The town is busier than last time round. It was really, really quiet before, but there is definitely more traffic and more people about than the previous lockdown.

“We have noticed a wee bit of a change with a lot more people buying craft beer that they might have had access to if they were out in bars further afield – Belfast or Derry maybe.

On the way out, Sean draws my attention to the crystal Kalashnikov hanging above the off licence tills. From Russia with love.

Covid-19, a less welcome import from the East, has brought down a muffled filter on the streets of our towns and villages. Conversation is terse, interaction limited.

Hope might spring eternal but you can't gulp on it forever.

Maghera's Covid rate fell into double figures last week, and despite a slight increase this week, expectant eyes turn towards the decisions of the NI Executive.

Heading home on the Coleraine Road, the site of the old police station is busy with construction, the new leisure facilities moving closer to completion.

Maghera is poised and ready when normality gets the green light.