Rogers fears for league after change of direction

Loss of 'elite' title a kick in the teeth 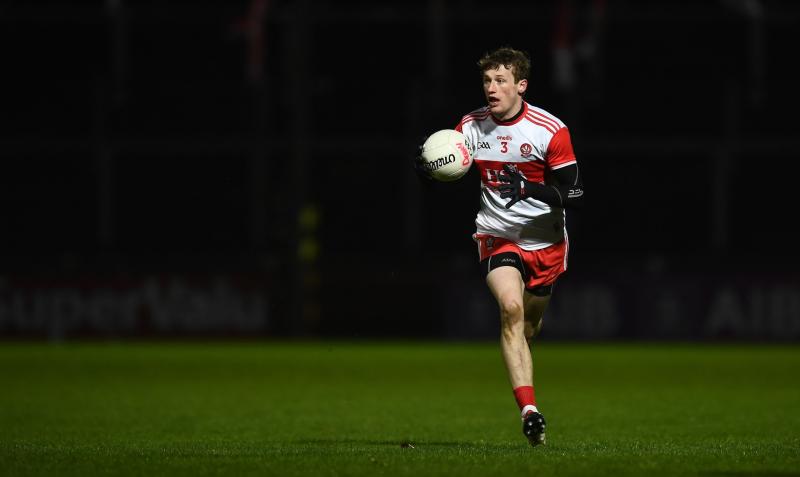 Derry defender Brendan Rogers feels the GAA won't have time to run off their league campaign, after last week's decision that inter-county players are no longer covered under the exemptions for elite sports under the Level 5.

Previously Gaelic Games could continue alongside other sports such as professional soccer and rugby.

The Slaughtneil man said it was a 'kick in the teeth' to no longer be classed as elite athletes.

“Not even for the sake of Derry or club (action) but the government are trying to tell you that Dublin is not elite,” Rogers told the County Derry Post.

“Let's be real, they are as elite as the GAA is going to be, with their dominance, their physical shape, their tactics and their mentality. If you ever talk to any of those guys, you know they are living that type of life.”

Rogers – who has friends in the Ulster rugby team - makes the comparison between their schedules and soccer players in the Irish league.

“You tell me that the likes of Linfield are more elite than Dublin are...I'd like to see it,” he states. “In every facet of a physical athlete, strength, pace, power and fitness, I don't see what is different when you talk about elite - even the time spent on tactics.”

Rogers felt the more 'fair' option would have been to allow sports that are 'professional only' to carry on. It would have told GAA players were they sat.

“In my opinion, that would've been the most common sense. I think professional would've been the clear cut way of saying you (GAA players) are a good athlete and at the top of the game, you aren't paid,” said Rogers.

“I don't think saying we are not elite any more is a fair representation, I think this was a misjudgement of terminology.”

With no games likely until at least after the Easter break, in early April, speculation is mounting on the possibility of playing the league this season.

Rogers didn't feel the news of the start of the season moving back was 'unexpected', but said it was 'frustrating' having the goalposts changed.

“How are you supposed to prepare for something properly and get yourself in the best physical shape...putting it back and putting it back,” he asked.

It would've been easier if he knew the season was starting later and 'made peace' with a new schedule, allowing players to focus accordingly.

“It would've been a lot easier mentally for a lot of people if it was in six months time, as a final decision.”

Last year, Derry had only two games remaining in their league campaign when the brakes were slammed on the fixture calendar.

“You can't start it at the same time they started it last year. There is no way you'd get the league started after a club championship season, then play inter-county championship.

“Where are you going to get the time,” Rogers asked, while referring to the 'concrete' plans for a provincial and All-Ireland club series.

“It was tight enough last year between club finishing and inter-county starting. It was maybe two weeks and if they do the same this year, to have two weeks to run off a league campaign, it doesn't make sense.

“You could have the league like the McKenna Cup and you could run it off a lot sharper, albeit it changes how the league would be perceived as a competition, but I suppose it is the year and the times we are in. There are a lot more tricky things to it than that.”