The day Bill Clinton came to town: US President gets a surprise kiss at the Guildhall in Derry

25 years on from historic visit 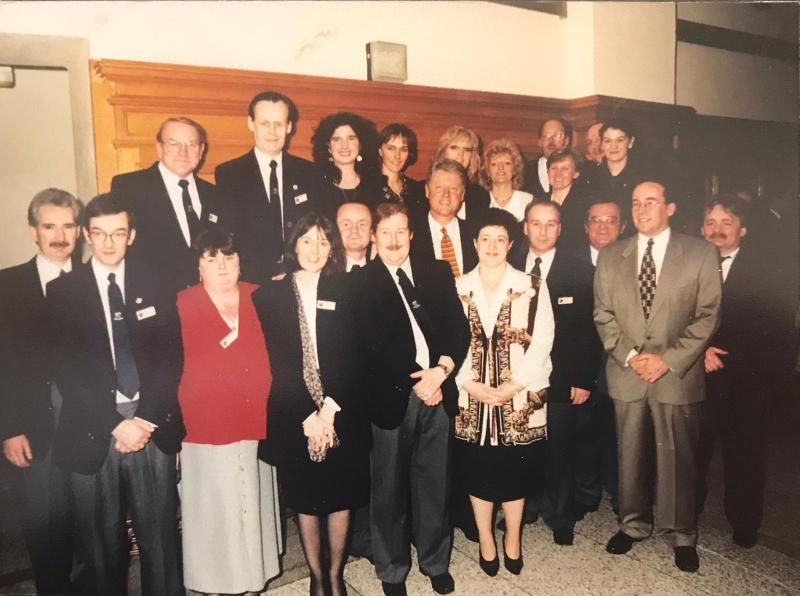 Bill Clinton pictured with council staff during his visit to Derry in 1995.

This day 25 years ago, on a grey and bitterly cold November afternoon, Bill Clinton became the first and last American President to visit Derry.

He brought with him First Lady Hillary Clinton, a large security entourage and a sense of hope that better days were ahead for the city.

Peace in the North was still new and fragile.

It was just a year on from the Provisional IRA ceasefire and the Good Friday Agreement was still three years away.

But Mr Clinton, who presided over the longest period of peace and economic expansion in American history, made it seem possible that could happen here too.

On Thursday, November 30, 1995, the city came to a virtual standstill as thousands of people gathered in the Guildhall Square to see the famously charismatic President.

The crowds extended into Waterloo Place, up Shipquay Street and along the Walls.

Tickets for the Guildhall Square were like gold dust and the security for the event was on a level Derry had never seen before, with CIA men patrolling the crowd and snipers lined up on the roof of the buildings on Shipquay Place.

But one local man, retired teacher Jim Craig, outsmarted security and 'snuck' his 16 year-old son in under their nose.

"I had a ticket for myself and my daughter Jeananne but I said to Johnny 'come on down anyway and we'll see what happens'," he recalled.

"I gave the guy the tickets and then I got him chatting about where he was from in America and Johnny slipped in past him.”

It was a day Mr Craig will never forget.

"Clinton was a star performer - he oozed charm and bonhomie.

"The city was really buoyed up by him.

"There was definitely a feeling that better days were coming."

Although it presented numerous logistical difficulties, President Clinton had insisted on coming to Derry's Guildhall Square.

Since Derry lacked an airfield suitable for Air Force One, the President and the First Lady took a cold and turbulent hour-long flight aboard a U.S. Marines Blackhawk helicopter.

Their arrival was much warmer and they were greeted by a massive crowd of American flag-waving supporters, many of whom surged to rope lines to shake their hands.

Mr Clinton was welcomed on stage by the Mayor of Derry SDLP Councillor John Kerr who threw out his arms to encourage the applause of the crowd.

“Mr President,” he said, “we, the people of Derry welcome you to our beloved city with the expression of our deepest respect and esteem for you personally... we pray to God that your deliberations in accord with others on these islands will bring about a truly lasting peace, for which we all yearn.”

His speech was interrupted by chants from the crowd of 'We want Bill' but the President, who wasn't familiar with the Derry accent, turned to John Hume who was sitting on his right and asked 'Who's Bull?'

John Hume, who Mr Clinton went on to describe as 'Ireland's most tireless champion for civil rights and its most eloquent voice of nonviolence', took to the lecturn to welcome him to his home city.

He was greeted by a cheer equal to that given to the President.

“The reason we are all gathered in our streets today is to say thank you to President Clinton and Mrs Clinton and their administration because peace in our land has been central to the President’s policy since the day he was elected and we on our streets, who know for the past 25 years what the absence of peace has meant, are deeply grateful,” said Mr Hume.

Finally, at 2.40pm it was Mr Clinton's turn to speak and he began by explaining how the historic visit came about.

"I know that at least twice already I have had the honour of hosting John and Pat in Washington.

"And the last time I saw him I said, 'You can't come back to Washington one more time until you let me come to Derry'. And here I am.”

In an emotive and uplifting speech,  the President told the people of Derry peace was a choice we could all make.

"The deep divisions, the most important ones, are those between the peacemakers and the enemies of peace - those who deep down inside want peace more than anything, and those who, deep down inside can't bring themselves to reach out for peace.

"Those who are in the ship of peace and those who would sink it.

"Those who bravely meet on the bridge of reconciliation, and those who would blow it up."

He continued: "My friends, everyone in life at some point has to decide what kind of person he or she is going to be.

"Will you be someone who defines yourself in terms of who you aren't, or who you are?

"The time has come for the peacemakers to triumph in Northern Ireland, and the United States will support them as they do."

Mr Clinton continued: "I believe we live in a time of hope and history rhyming.

"Standing here in front of the Guildhall, looking out over these historic walls, I see a peaceful city, a safe city, a hopeful city, full of young people that should have a peaceful and prosperous future here where their roots and families are.
"That is what I see today with you."

Following his historic speech, the President and the First Lady withdrew into the Guildhall building for two closed-door events, including a reception for the inauguration of the Tip O’Neill Chair for Peace Studies at the University of Ulster.

After his official duties in the Main Hall were over, the couple descended the stairs to meet with members of staff from Derry City Council, including 25-year-old Karen Henderson who worked for the Member Service and works for council to this day as the Mayoral and Member Service Officer.

"We had a very short time to prepare for the visit so we were working every hour God sent," Karen recalled.

"It was all confidential and we knew it was going to be a big deal.

"On the day itself I was stationed at the BT building checking people's tickets and there were more security checks after that to check people's bags and so on.

"After the speeches we were allowed up to the Main Hall to watch from the back and afterwards there was a special audience set up for staff just outside what is now the Mayor's Parlour."

The President made his way along the line of staff shaking each of them by the hand and thanking them for their work, but Karen decided to welcome the President in  a way he wouldn't forget.

"He went to shake my hand and I kissed him on the lips," she admitted.

"I had to seize my moment."

Years later Karen was working at the Guildhall for the filming of the Season 2 finale of Derry Girls which recreated the President's historic visit.

"I told the cast that I was actually there that day," said Karen.

"They recreated it brilliantly. The buzz was just the same."