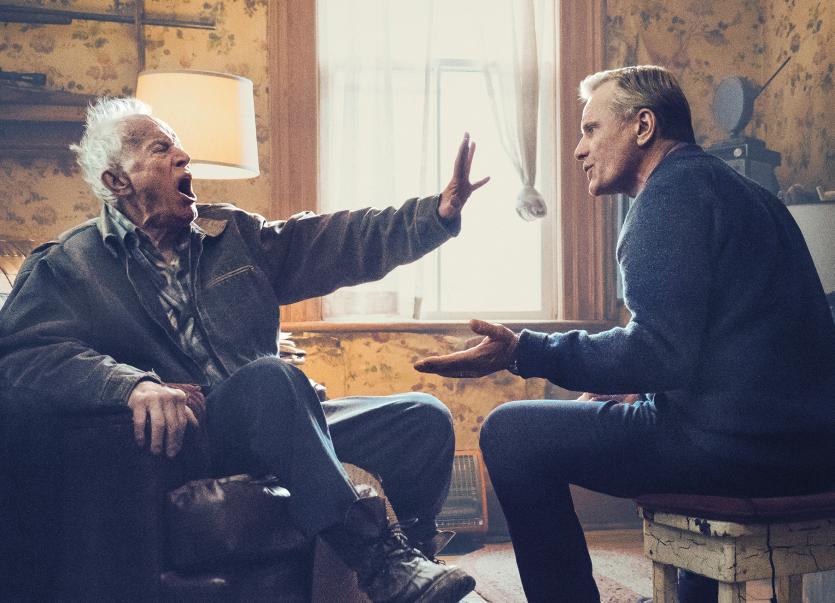 Falling with open this year's festival.

In a year full of change and challenges, the 33rd Foyle Film Festival has gone virtual, with many of the films in the programme reflecting this year’s theme.

The festival launches with Falling.

John must cope with the profound changes happening with his father Willis, who is suffering from dementia.

Coping with a loved one living with such a debilitating condition is difficult enough, but Willis is also homophobic and this causes big problems when John brings him to California to live with him and his partner Eric.

In his directorial debut, Viggo Mortensen explores the challenges and conflicts of a contemporary family.

The festival programme explores the lives of individuals and families dealing with difficult and challenging situations - including physical and psychological conditions.

In Eternal Beauty, Sally Hawkins is a woman living with paranoid schizophrenia after a diagnosis in her 20s.

Since then her life has been shaped by breakdowns and institutions.

The authenticity in the film reflects director Craig Roberts’ personal experience of having witnessed this difficult condition through the eyes of a family member.

While the Closing Night film Irish movie Rose Plays Julie is the story of a young woman searching for her biological mother. Set against a backdrop of misogyny, revenge and longing. Rose undertakes a journey that leads her to revelations that are both devastating and dangerous.

The festival is delighted to partner with Belfast Film Festival to screen the new documentary on the life and career of Martin McGuinness.

Directed by Sonia Nic Giolla Easbuig, Martin McGuinness - I Fought, I Made Peace, I Made Politics features a wealth of interviews and personal memories from political colleagues, opponents, family and friends.

This film sheds new light on the life and career of this controversial political figure, and a man who contributed so much to the Peace Process.

As the world responds to the changes and challenges imposed by Covid-19, veteran filmmaker John Pilger’s latest film The Secret War On The NHS could not be more timely.

The film takes us through a history of threats to Britain's National Health Service, from its founding by Labour in 1948 through a privatising push by Margaret Thatcher’s government, to challenges by new Conservatives.

The film exposes how the dismantling of the NHS has exposed a health care system that was already on its knees, and is now struggling to deal with a devastating pandemic.

Music has always been an important element of the Foyle Film Festival, and this year is no exception.

My Darling Vivian is the story of Vivian Liberto - Johnny Cash’s first wife as told for the first time by their four daughters.
Cash’s marriage to June Carter is well-known, but this documentary shines the spotlight on his relationship with his first wife, Vivian.

In the mythologised version of the Johnny Cash story, his second wife and collaborator, June Carter, is portrayed as the woman who rescued him from the dark side of fame.

This version of Cash’s life was immortalised in the film Walk The Line. In the film, Cash’s first wife Vivian, on the other hand, was relegated to the sidelines when in fact she was the inspiration for his iconic song “I Walk the Line.”

This fascinating documentary attempts to salvage the reputation of a woman believed to be misunderstood and shoved into obscurity.

Billie is the story of the iconic blues singer Billie Holiday - one of the greatest voices of all time, and also a controversial figure whose tragic life was a series of abusive relationships and drug addiction.

Her seminal protest song Strange Fruit, about the lynching of black people across the Deep South of America, made her an enemy of the state.

In 1971, journalist Linda Lipnack Kuehl set out to write the definitive biography of Billie.

Over eight years, she tracked down and tape-recorded over 200 hours of interviews with the extraordinary characters that populated the legendary singer’s short, tumultuous life.

But Linda’s book was never finished and the tapes never heard. Until now.

Anchored around these never-before-heard interviews, Billie plays out like a film noir.

Mixing archive, drama, animation and still images, the film captures the complexity of a legend through the eyes of the woman whose obsession would lead to her own mysterious, untimely death.

Crock Of Gold: A Few Rounds With Shane MacGowan is the latest documentary from Julien Temple as he turns his attention to the legendary singer-songwriter, and former frontman of The Pogues.

The film includes interviews, combined with archive and present-day footage to tell the life story of this unique talent. MacGowan’s life is one defined by depression, drug dependency and misbehaviour.

Then in the mid-70s as the Punk Rock scene exploded - MacGowan finally found a place where, at last, he fitted in.

In a year when the Black Lives Matter movement has exploded across the world in the wake of the police murder of George Floyd, and other subsequent police killings, the festival is happy to support the international plea for justice and an end to racism with the screening of the documentary The Central Park Five.

In 1989, five black and Latino teenagers from Harlem were arrested and later convicted of raping a white woman in New York City's Central Park.

They spent between 6 and 13 years in prison before a serial rapist confessed that he alone had committed the crime, leading to their convictions being overturned.

As always, the festival is delighted to present the Oscar® and BAFTA affiliated Light In Motion (LIM) Short Film Competition, with the best in Irish and International short films and animations from around the world screening online throughout the festival.

“With the festival going virtual, we believe the level of screenings online from the very best feature films, to short films and documentaries will be as fantastic as ever. Through our continued funding, we recognise the contribution this festival plays in Northern Ireland’s film industry by showcasing the best in film.”

Festival director and programmer Bernie McLaughlin said: “We are delighted to deliver Foyle Film Festival this year as a virtual event. It is unfortunate that it is not possible to hold the festival in the usual venues throughout the city.

“However, the festival’s virtual reincarnation this year does have the huge advantage of making every film available for a longer period of time as once a ticket has been purchased from the day it premieres at the festival, the audience will have seven days in order to unlock their ticket, and then a further 24 or 48 hours in which to watch the chosen film.

“This provides a great level of flexibility for anyone who might miss out on specific dates and times because of work and/or other commitments.

“We hope that our loyal local audience will continue to engage with the festival, but also that this year’s programme will attract a new virtual audience to this event.”

The festival acknowledges the continued support of our funders - the Department for Communities through Northern Ireland Screen and Derry City & Strabane District Council.

Foyle Film Festival is a project of the Nerve Centre.

Check out and book tickets for this year’s virtual Foyle Film Festival at the following links: