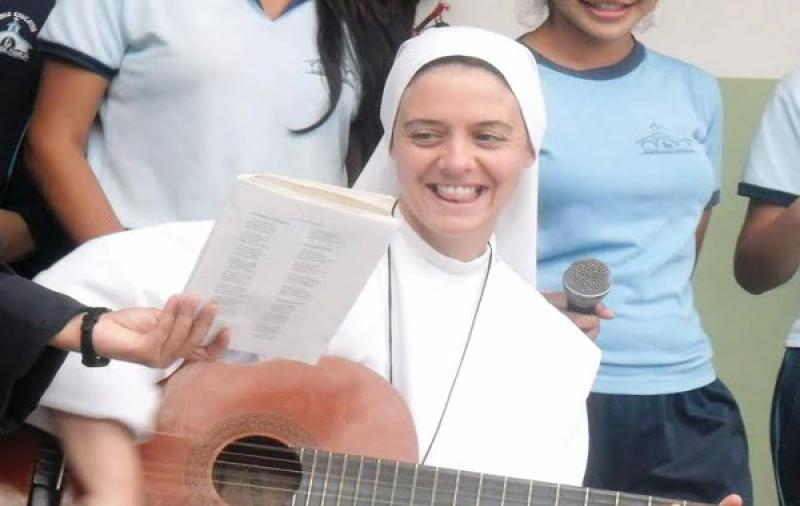 The story of a young Derry nun who many believe will be made a saint is continuing to touch hearts around the world.

Sister Clare Crockett, from the Brandywell area of the city, had been pursuing a career as an actress and TV presenter when she got the calling to devote her life to God.

She was just 33-years-old when she was killed in an earthquake in Ecuador as she attempted to guide five girls to safety on April 16, 2016.

Since her death, many people from across the world have begun praying to her and a number of miracles have been attributed to her intercession.

A Novena Prayer to Sister Clare, which was written by her holy order, Servant Sisters of the Home of the Mother, has brought great comfort to people during the coronavirus pandemic and many homes in Derry have displayed her picture in their window to ask for her protection.

The story of her religious conversion 'All or Nothing: Sr Clare Crockett' has been turned into a film which has got 3.8 million views on YouTube.

"The number of people devoted to Sr Clare just continues to grow and grow," said her sister, Shauna Gill.

"It's not just here in Derry or in Spain, it's everywhere.

"After the film about her life was released there was a lot of interest and then it all died down but all then all of a sudden it has grown again.

"I think it started when people started putting her photo in their window during lockdown and it all grew from there."
Termonbacca has commissioned a 2021 calendar of Sr Clare and 500 copies sold out in one day.

"The first 160 went in 20 minutes, people were buying them for themselves and all their friends and family,” said Mrs Gill.

A reprint of 500 copies has now been ordered, which will be available from this Wednesday, November 11.

In the last 11 weeks, 6,000 Sr Clare candles have been sold and they have been ordered from Australia, America and even Croatia.

"The candles have a suggested donation of £2 but people are very generous," said Mrs Gill.

"All the money raised from the candles has been donated to local charities to help people who are struggling because that is what Sr Clare would have done."

A book about Sr Clare's life which was published earlier this year is also bringing her story to a new audience.

'Sr Clare Crockett: Alone with Christ Alone' by Sr Kristen Gardiner is based on interviews from people who knew her, and her own religious writings.

Sister Kristen, who now lives in Rome, spoke with Sr Clare's sisters Shauna Gill and Megan Nicel about her childhood growing up in Derry in the 1980s and 1990s for the book.

Because of her growing popularity, Sr Clare's grave in the City Cemetery has also become a place of pilgrimage for many.

"I went up to her grave the other night and there must have been 20 bouquets of flowers laid there," said Mrs Gill.

"Those are all thank yous for favours that have been granted.

"While I was there there were a steady stream of people visiting her grave.

"There was one young couple who had come all the way from Armagh after hearing about her.

"They said once they heard about her they had to come. It's amazing how many young lives she has touched."

Sr Clare's family have asked people visiting her grave to be mindful of the nearby graves.

"It has been brought to our attention that nearby graves have been stood and we know this is very upsetting to the families so we would ask people to please be respectful," Mrs Gill said.

Next April 16 is the fifth anniversary of Sister Clare's death and her holy order will then open the cause for her to be made a 'Servant of God' by the Pope, which is the first step in the canonisation process.

"A lot of miracles have been attributed to Sr Clare's intercession and there are growing testimonies about the things she has done" added Mrs Gill.

'Sr Clare Crockett: Alone with Christ Alone' by Sister Kristen Gardener is available to buy on Amazon in paperback and for the Kindle.

A list of local shops that stock the candles and calendars is available on the Sr Clare Crockett Facebook page.