The night the Luftwaffe bombed Derry

German bombers targeted the city during the Blitz. 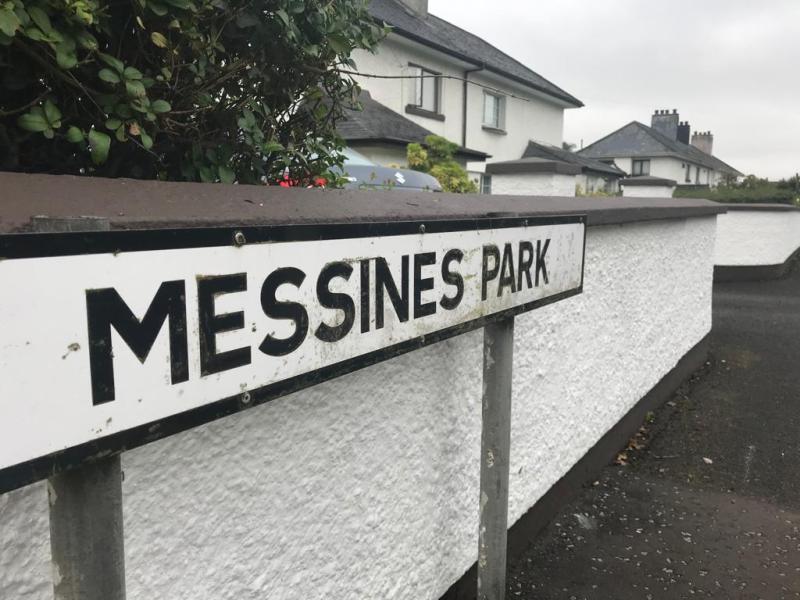 Messines Park, where thirteen people lost their lives in the 1941 raid.

Liam Tunney talks to historian Nigel Henderson about how a Shantallow housing development became the unintended target of German bombers in 1941.

Seventy miles up the road, Derry was hit only once. It was not the Germans’ planned target.

Thirteen lives were lost when a German bomb overshot its proposed target and hit Messines Park in Shantallow, home to a colony of ex-servicemen who had served in the Great War.

Messines Park was named after the 1917 Battle of Messines, in which the 16th (Irish) Division and 36th (Ulster) Division had fought side by side.

The colony was one of several built under the terms of the 1919 Irish Land (Provision for Sailors and Soldiers) Act to cater for ex-servicemen returning from the First World War.

Fifty-seven cottages were erected on a 10.32-acre patch of land in the Shantallow area, which had been purchased from Sir John McFarland of Aberfoyle on the Strand Road. 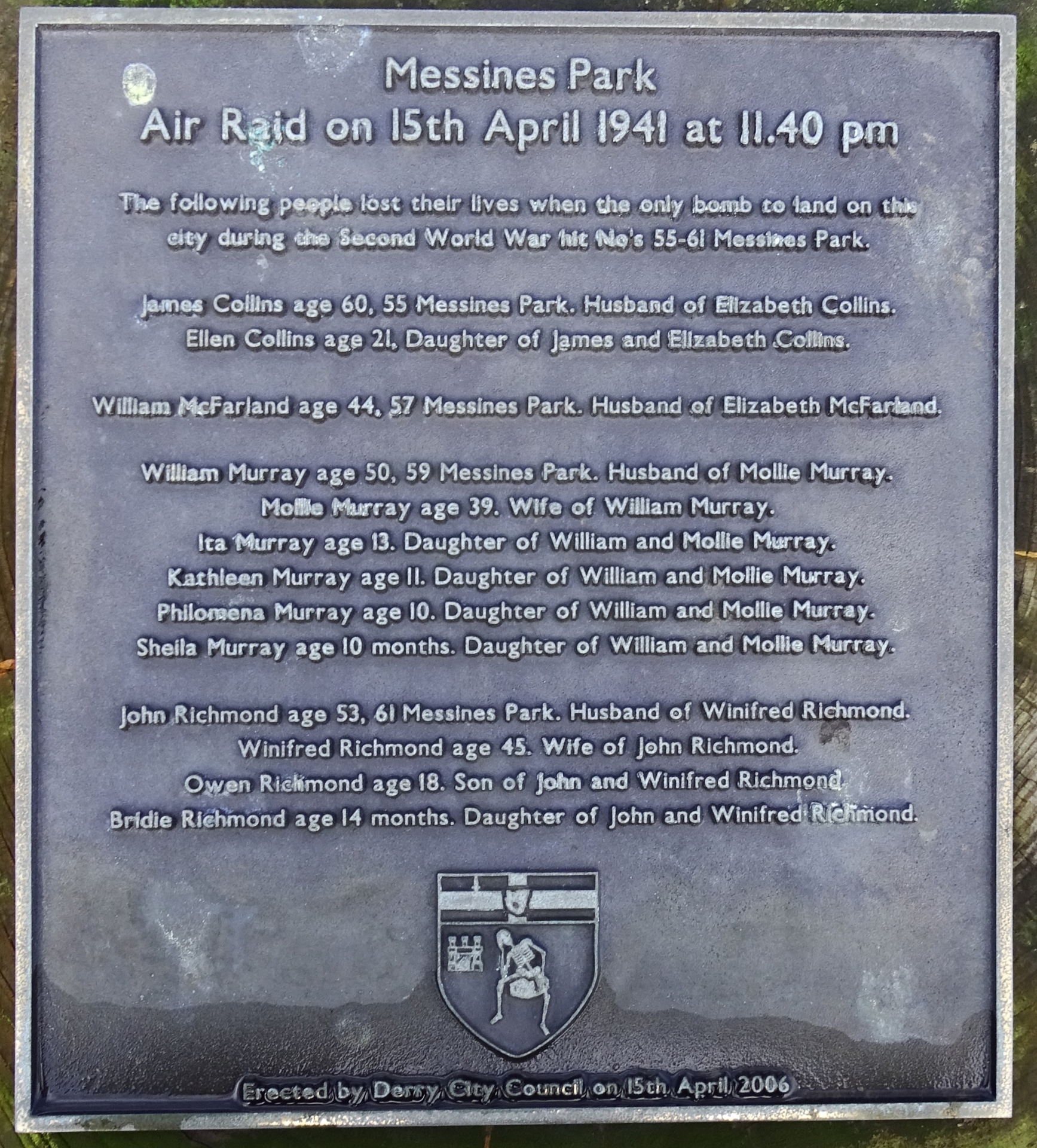 A memorial plaque erected by Derry City Council in 2006.

Nigel Henderson, a researcher with History Hub Ulster, has been documenting the locations of the 1,252 ex-servicemen’s cottages built in Northern Ireland.

“The largest colony or collection of cottages in County Londonderry are the ones at Messines Park,” he told the County Derry Post.

“I’ve been going through the records trying to get details of the styles of the houses, how many rooms they had, whether they had toilets and bathrooms and things like that.

“Once a family was installed in them, they tended to stay there for life, but there were some issues with evictions due to non-payment of rent.

“A lot of the guys coming back from the war weren’t able to keep up employment so they may not have been able to pay the rents.

“The rents weren’t exorbitant for their time or the standard of the houses, but the ISSLT (Irish Sailors and Soldiers Land Trust), were strict at taking people to court for non-payment of rent.

“You had guys who were evicted in the early 1930s and then another ex-serviceman might have moved in again. In Belfast, there were guys on the waiting list as far on as the 1960s.” 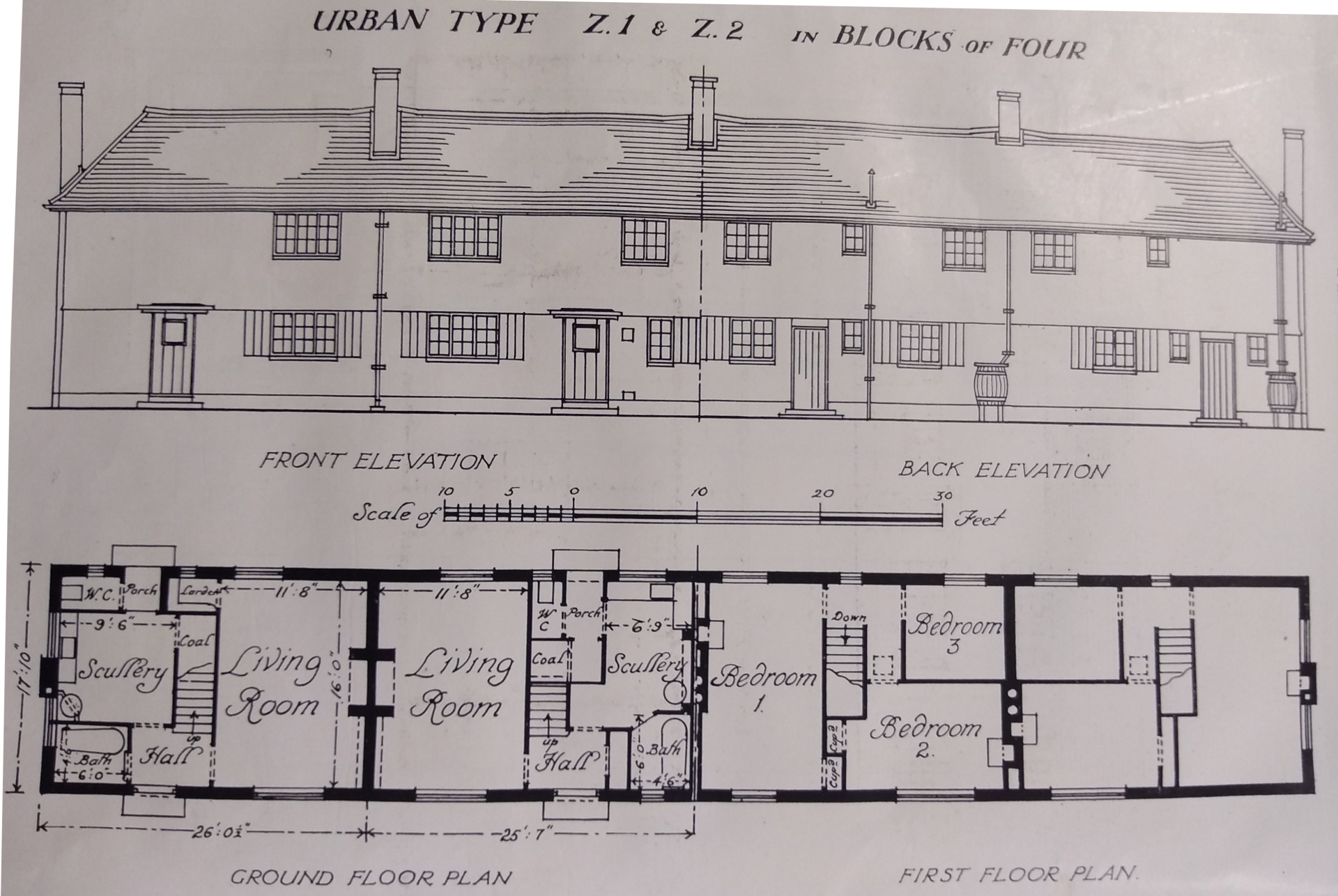 Early plans show the layout of the ex-servicemen's three-bedroom cottages at Messines Park.

Initial rent for the houses, designed by Roland Ingolby Smith, chief architect for the NI Ministry of Finance from 1922 to 1942, was nine shillings per week, around £26 per week today.

On the night the Luftwaffe bombed the city, all 13 fatalities occurred in a row of houses facing onto the Buncrana Road.

Nigel Henderson said the attack on Messines Park was unlikely to have been in the Germans’ plan. Instead, it is thought the nearby docks were their intended target.

“What I understand is that they were aiming for the docks. During the Second World War in Derry, there was a naval base there,” he said.

“It was a base for the Royal Navy going out on patrols in the North Atlantic, but they overshot and Shantallow was not that far from where the docks would have been.

Ten members from the Richmond and Murray families died in the attack, along with 60-year-old James Collins, his 21-year-old daughter Ellen and William Alexander McFarland.

Their loss was keenly felt within Messines Park, where a strong community spirit had grown since the houses were erected in June 1925. 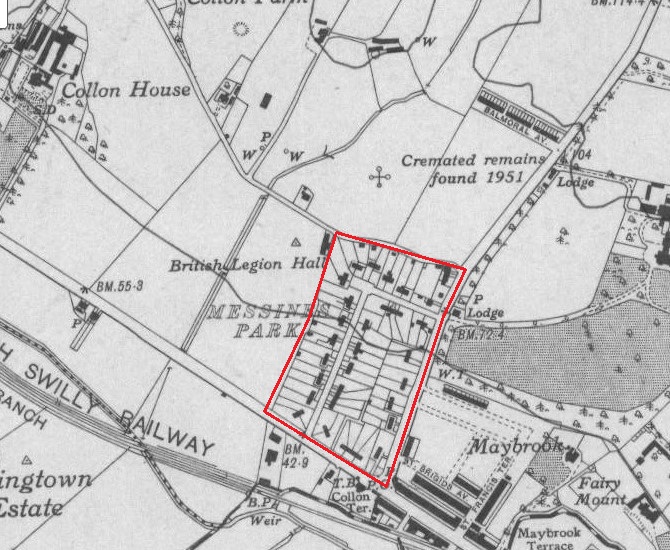 A map showing the location of the cottages at Messines Park.

Residents established a local British Legion branch and an accompanying hall was built just outside the development in 1927.

A colony of ex-servicemen being settled in Derry has the potential to be controversial when looked at through a contemporary eye, but an atmosphere of co-operation prevailed in the aftermath of the First World War.

“I don’t think there was any sectarian sentiment against the houses, because for the guys who had moved in, religious affiliation was not a factor,” explained Nigel.

“What was taken into account was how big a family they had, whether they had employment, whether they were wounded or gassed in the war, or the standard of housing they had.

“Some of those who died were Protestants and some were Roman Catholics and because it was on the edge of the city, they formed almost a small community of their own.

“The attitude was that it didn’t matter if you were a Catholic or a Protestant, a unionist or a nationalist, the guys served together. Both communities had been up for participating.

“When those guys came home, the religious affiliation of their ex-servicemen neighbours would not have been a major factor or a cause for concern.

“They had served together through a nightmare and living close to other ex-servicemen provided an opportunity for them to talk about their shared experiences.

“This was something the veterans seldom did inside their homes or with their families.”

While not their intended target, the German bombers would no doubt have felt a sense of schadenfreude at how things panned out.

Nigel Henderson is struck by the tragic irony of the ex-servicemen’s demise.

“It’s the only part of Derry that was hit in the German air raids, but it just happened to be men who had fought in the First World War who were the principal victims,” he said.

“That is the irony of it. They survived the Germans in the trenches of the First World War to then die during the Second World War from aerial bombing.”

Father and daughter, James and Ellen Collins, lived at 55 Messines Park. Sixty-year old James was the oldest victim of the bombing and was originally from Eglinton.

He was stationed at Finner Camp in County Donegal when he met and married Elizabeth Doherty in 1916 at Glendermott Parish Church.

Their daughter Ellen was born in 1920 and was just 21 when she died. Both were buried in Glendermott Parish Church.

Born at Fountain Street in Derry City, William Alexander McFarland had been working as a fitter before he enlisted with the Royal Engineers in 1916.

He served with Fortress Company at Salonica for over three years and was living at Hawkin Street in the city before he was transferred to Class Z Army Reserve in 1919.

William married Elizabeth Reid in 1921 at St Augustine’s Church of Ireland and worked after the war in the Employment Exchange.

A member of the Messines Park branch of the British Legion, he was serving as a sergeant with the Local Defence Force when he died, aged 44, in the bombing raid.

Six members of the Murray family, who lived at 59 Messines Park, lost their lives in the bombing. William (50), was born on Donegal Street and married Omagh woman Molly Gorman (39) in 1922 at St Columb’s Catholic Church.

William had served with the Guards during World War One and was serving as a sergeant with the Local Defence Volunteers when he died.

The 1941 German bomb claimed the lives of four members of the Richmond family. John Richmond was born in 1888 in the Waterside and had been right at the thick of the war.

Stationed in China with the Royal Inniskilling Fusiliers, he landed on Y Beach, Cape Helles, at the start of the Gallipoli land campaign.

After being taken prisoner at Bertencourt, he was held in prisoner of war camps in Le Quesnoy Limburg and Dulman, before being discharged as ‘no longer physically fit for war service’ in 1919.

John (53) and his wife Winifred (44), along with their children Owen (18) and Bridget (18 months) died during the Messines Park attack and were buried in Derry City Cemetery.