The 'Rock at the Lough' festival ran for two years in the late 1980s. 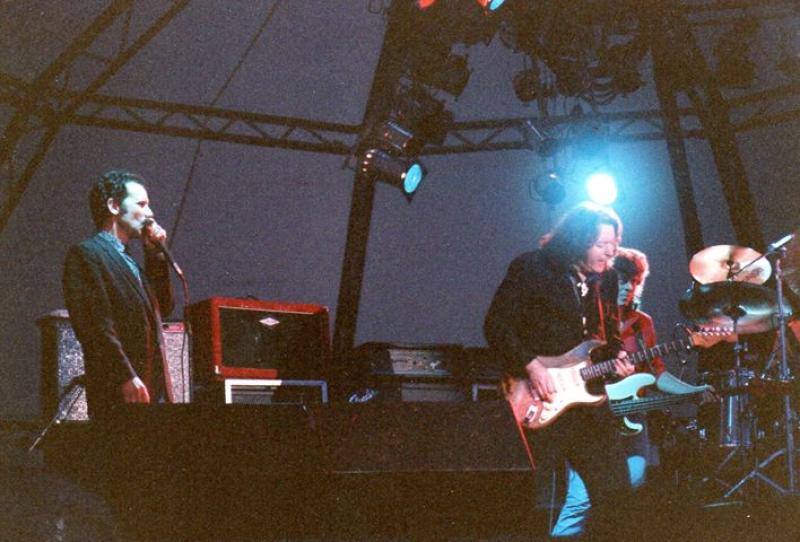 Legendary Irish musician Rory Gallagher on stage by the Loughshore in 1989.

Liam Tunney speaks to fans and artists as they recall the time international rock superstar Rory Gallagher and a host of glittering support acts brushed off a bomb scare to perform on the outskirts of a County Derry village.

“Good to see ya,” was how internationally acclaimed blues musician Rory Gallagher opened his set at the Rock at the Lough festival in 1989, before launching into a typically energetic rendition of 'Continental Op'.

It’s unlikely Ballyronan had ever seen anything like it.

Tickets for the event cost £11.50 and, even allowing for inflation, represented real value for the sheer quality of the acts on show.

Rory Gallagher was the headline act in the festival’s second year, and would ultimately prove to be the last, as it never returned to the Loughshore.

While shortlived, the festival boasted a stellar line up, with a host of rock talent making their way to the south Derry village. 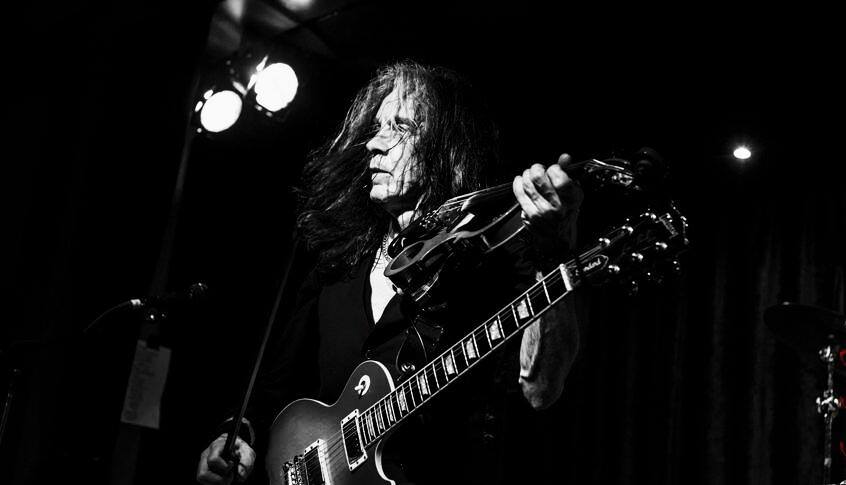 Among them was Pat McManus, lead guitarist and fiddle player in Mama’s Boys, who were second on the bill behind Gallagher on that late July evening 31 years ago.

“We were heading off on a European tour and it was seen as a good warm-up gig for us to do as well. It was a good festival gig to get us into tip-top shape,” he told the County Derry Post.

“We had an album out - Growing Up the Hard Way – and we would have been there to promote it. They must have thought they’d have the two Irish bands to headline – Rory and ourselves.

“Plus, to be on the same bill as Rory Gallagher was fantastic, we always jumped at the chance to share the stage with Rory.

“He was one of my heroes growing up, and still is. He was marvellous. From that point of view, it was great.

“We’d shared the stage a couple of times with Rory in Germany and various places like that, but this was the first time on home soil, which we were delighted about.” 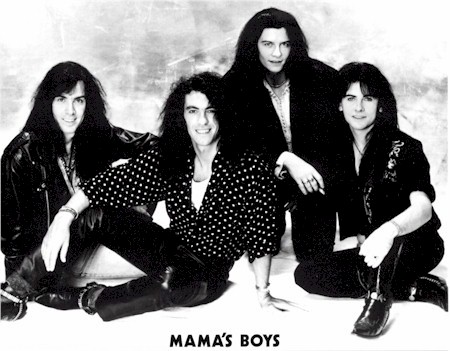 While McManus, a native of Derrylin in County Fermanagh, was unfamiliar with Ballyronan, Mama’s Boys did have a link to the maiden festival of 1988.

“Magnum was the headline act the year before and Mark Stanway, their keyboard player, has been in my solo band quite a few times,” he said.

“This kind of festival wasn’t too popular in Ireland, but in Germany and other places we toured, you would get lots of little villages putting on festivals.

“The attendance could be anywhere from 4,000 to 10,000 people, it just depends. It was a brave thing to do. It wasn’t going to be Dalymount or Macroom that Rory had done in the past.

“It was a brave undertaking for those guys to put on the show and get the bands to play. The people were fortunate to get to see those acts play.

“Rory was an international rock star, so to see him on your own soil, so close to Lough Neagh was an incredible thing. You wouldn’t have seen much of Rory playing that kind of festival.”

While the presence of the Ballyshannon-born Gallagher was undoubtedly the festival’s main draw, a host of other stars were strewn throughout the supporting acts. 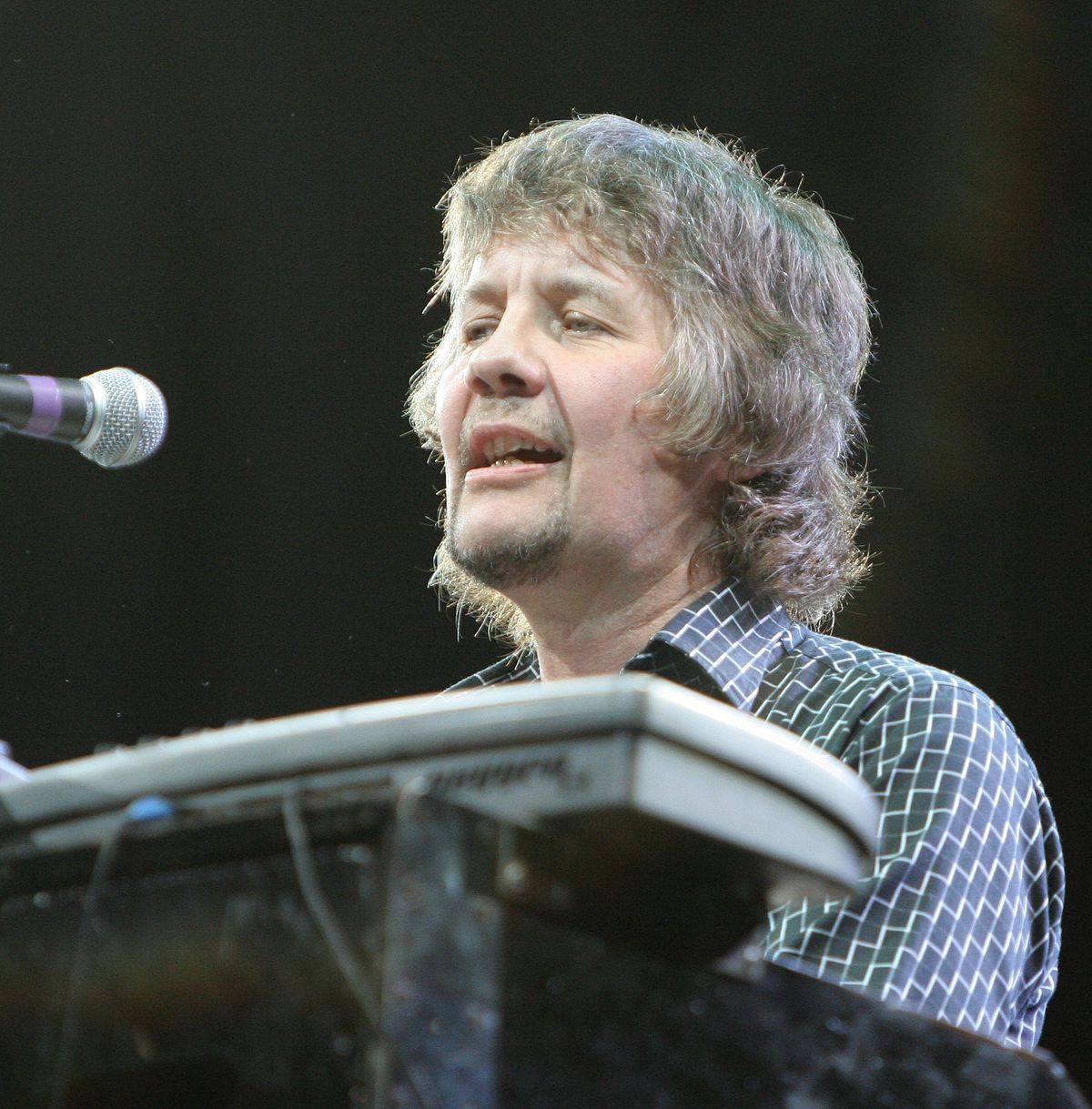 Don Airey of Deep Purple shared the stage with Mama's Boys in 1989.

Magnum’s Mark Stanley was also involved with the legendary Phil Lynott’s Grand Slam, while there was also a surprise appearance from one of Northern Ireland’s finest rock musicians.

“The legendary Vivian Campbell, who now plays with Def Leppard, made a guest appearance with his old band, Sweet Savage, so that added more excitement on the day,” said McManus.

“It was a wonderful afternoon’s music. People were rather spoiled. His pedigree as a musician from Northern Ireland was second to none. Everybody was very excited to see Vivian there.”

The eclectic nature of the festival’s line up saw rock fans from across the country converging on the shores of Lough Neagh.

Larne native Gerry McNally, current sub-editor of the Folk and Tumble website, had travelled down from the east coast for Rory’s gig, having also been in attendance the previous year.

“I can remember crossing a couple of fields and it was right beside the Lough,” he said.

“It was a beautiful venue too, right on the shores of Lough Neagh and both years they had fireworks at the end of each night. The line ups were good both years too.

“You were lucky if someone came to the Ulster Hall or the King’s Hall. Gigs would have been quite rare back then, you were mostly going to Dublin for them.

“I was only getting into Rory’s music, but I’d never seen or heard anything like it. He was still in good health back then and was just a ball of energy.

“Sadly, that was the one and only time I saw him. Looking back, I wish I was as familiar with his music then as I am now. I would have appreciated it a lot more.

“At the time, I’d never seen anything like it. I was living in the moment, taking it in and just being awestruck. His playing was amazing.

“The only other band I really remember were Dumpy’s Rusty Nuts. They didn’t take themselves too seriously, but they were a good, fun band.”

Dumpy’s Rusty Nuts may not have been Gerry’s go-to, but for young fan Darren Seaton, they were the main draw.

“Dumpy’s Rusty Nuts was the other band I was specifically there for,” said the Belfast native, who was 17 at the time.

“You’d always see them listed in Kerrang, they were really good, but we were there all day. You got dropped off in the morning and you get picked up afterwards. 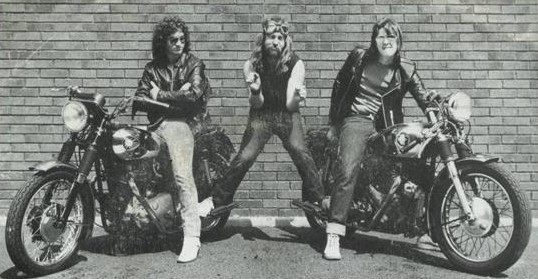 Young rock fan Darren Seaton made the trip from Belfast for a glimpse at Dumpy's Rusty Nuts.

“Our trip was run by Makin’ Tracks in Belfast, they used to be the main record store. You would have got your gig tickets and bus tickets and then met at Glengall Street for the bus.

“The day we were there, there was also a band from New Zealand that nobody had ever heard of. I’ve no idea how they got on the bill, but they were touring round Europe.

“They had a video camera with them and were basically filming us all telling them to f**k off.

“Rory, obviously, was legendary. I didn’t really know a lot about him, because being 17, I was more into Bon Jovi and stuff at the time,” he said.

“I hadn’t realised the epicness of what was in front of me and the fact I wouldn’t get to see him live again.”

Despite the profanity towards the unwitting visitors from the southern hemisphere, Darren and his friends managed to make their way to the backstage area.

“There was a band playing called DARE, whose frontman, Darren Wharton, played keyboard with Thin Lizzy,” he said. 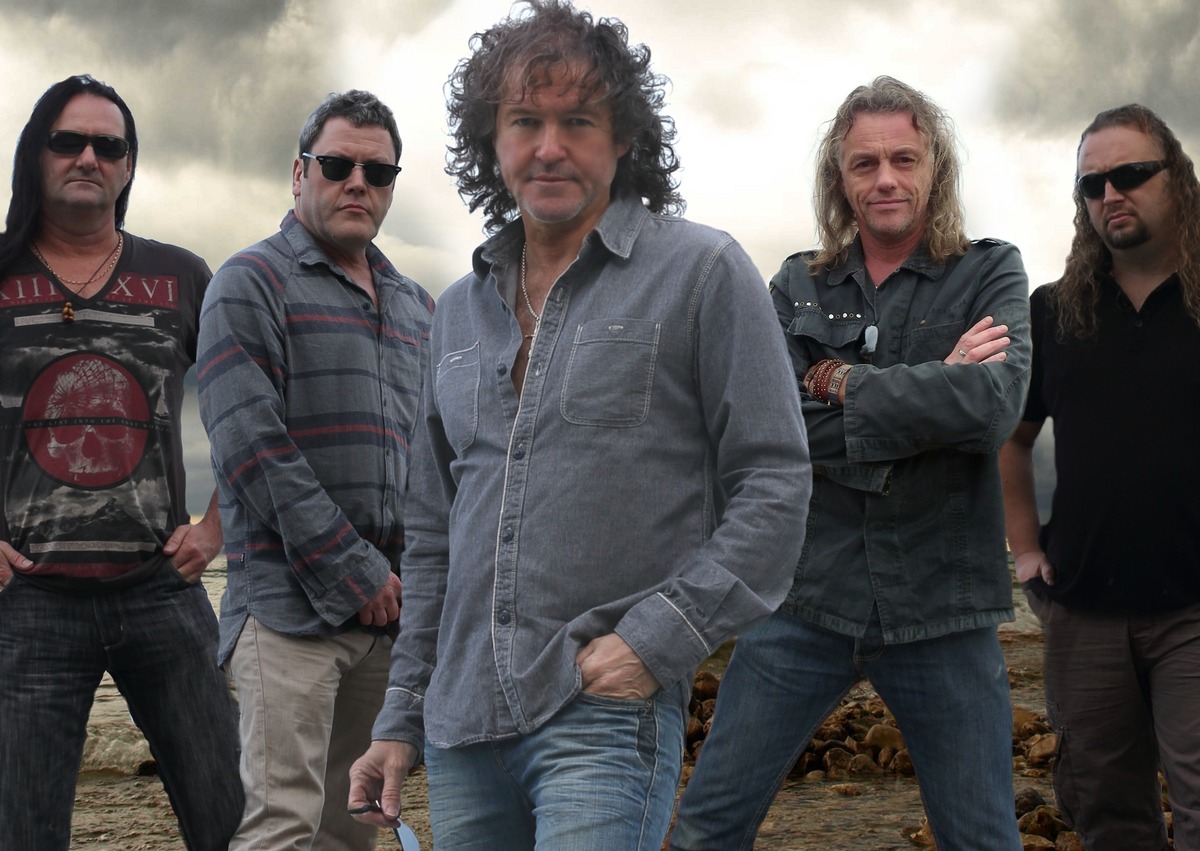 Darren Wharton, formerly of Thin Lizzy, fronted DARE at the 'Rock at the Lough' festival.

“We were talking to their merch guy, who had a table behind a wire fence. He was on one side in the ‘backstage’ area and we were on the other, passing money through the fence for t-shirts.

“He gave us his pass and told us to go into the dining hall, so me and a couple of mates went down and had dinner with the drummer and the bass player there!”

Musicians coming to play in Northern Ireland had become a rare breed throughout the Troubles, with many acts choosing to avoid coming to Belfast in particular.

Despite its idyllic setting on the Loughshore, the Ballyronan festival was not immune to the threat of violence.

“We got down the road to Ballyronan to be told we couldn’t get in yet, because there was a bomb scare and a Chinook flying overhead,” recalled Darren.

“It was a hoax, but we were sitting on the bus for about two hours outside Ballyronan until they cleared it and we were all allowed in.”

News of the bomb scare also filtered through to the bands, all of whom had shown a steely determination to perform.

“I remember something about that, but it obviously was a prank, because no one passed any remarks,” said Pat McManus.

“And even if it was, we were going to go ahead and play anyway because people had paid in there and wanted to see the bands.

“They [the police] were probably wondering what the hell was going on with all the people gathering – it might have been that more than anything else.

“We were determined, come hell or high water, we were going to get on that stage and play and the rest of the artists that day felt the same.” 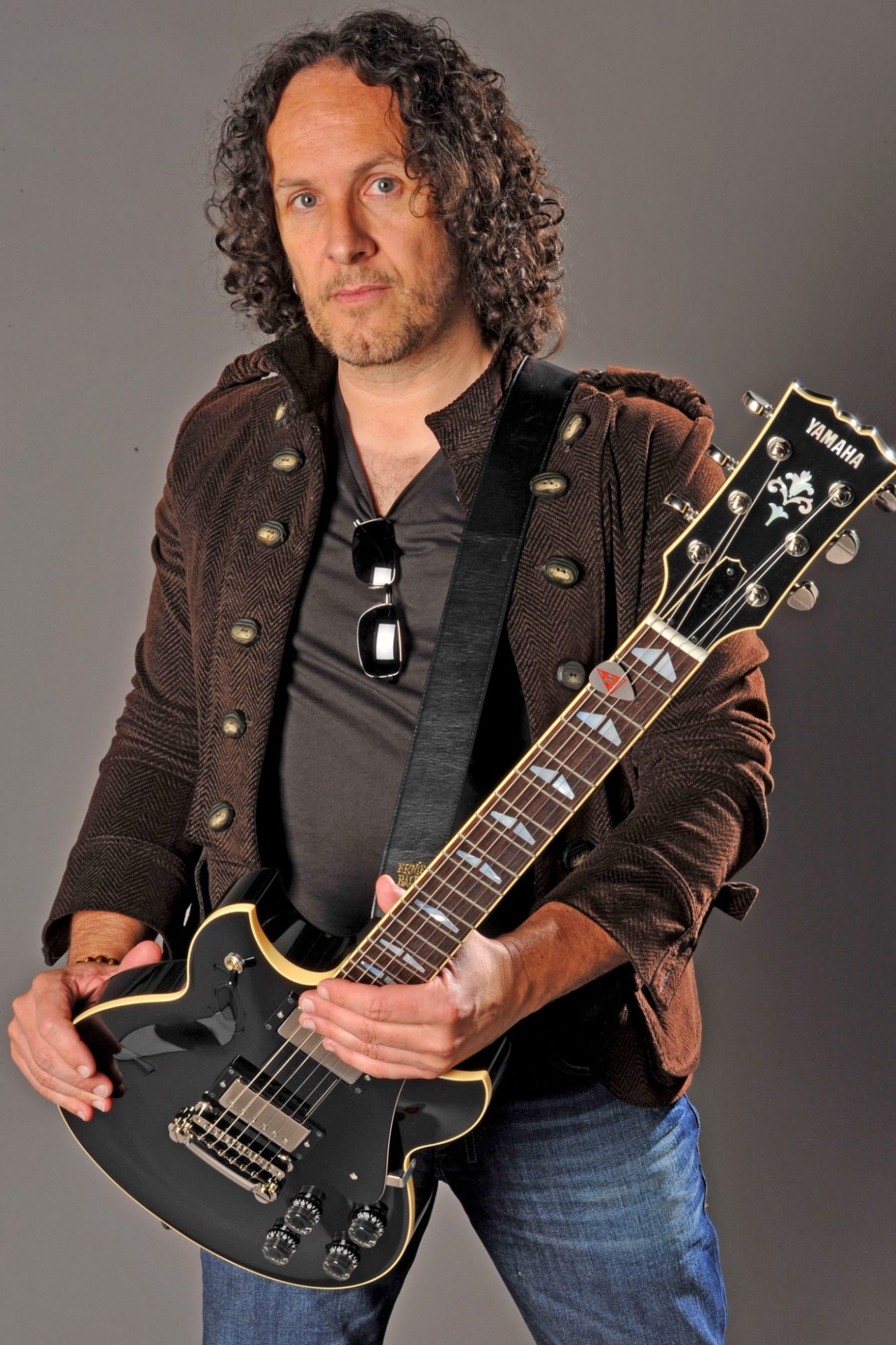 Local rock star Vivian Campbell made a surprise appearance at the festival.

Despite a hugely ambitious line-up, the festival only lasted for two years. Although a beautiful venue, a lack of marketing and issues with accessibility undermined its success.

“I’d say there was somewhere in the region of 4,000 people there,” said Pat McManus.

“People didn’t know about it either and others were a bit sceptical, but from looking out from where I was on the stage, that’s the amount I would have guessed.

“It was a brave undertaking for those guys to put on the show and get the bands to play. The people were fortunate to get to see those acts play.”

One of the fortunate, Darren Seaton, sums it up well.

“It’s strange that a random place like Ballyronan had these two big festivals two years in a row. It was a great day out.”

His debut EP 'When The Light Hits The Room' is now available to stream.